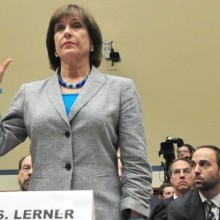 We all recall IRS official Lois Lerner stepping before Congress, pointing the finger at others for the targeting of Barack Obama’s political enemies and then turning around to plead the Fifth, which the House Oversight Committee claimed she waived. Following that little “stunt,” Lerner was on paid leave of over $3,500 a week. It seems as more information has been coming out about collusion between the Federal Election Commission and the IRS, Lerner has decided to retire, and she’ll be getting full pension benefits, likely worth more than $50,000 provided by the very people she and the IRS are alleged to have targeted.

Her retiring comes before the Treasury Department can fire her, which allows her to keep her pension.

Lerner’s retirement on Monday comes as reports have come out indicating that IRS officials thought that Obama wanted a crackdown on Tea Party groups.

IRS employees were “acutely” aware in 2010 that President Obama wanted to crack down on conservative organizations and were egged into targeting tea party groups by press reports mocking the emerging movement, according to an interim report being circulated Tuesday by House investigators.

The report, by staffers for Rep. Darrell E. Issa, California Republican and chairman of the House Oversight and Government Reform Committee, quoted two Internal Revenue Service officials saying the tea party applications were singled out in the targeting program that has the agency under investigation because “they were likely to attract media attention.”

In the report, the investigators do not find evidence that IRS employees received orders from politicians to target the tea party, and agency officials deny overt bias or political motives.

But the report says the IRS was at least taking cues from political leaders and designed special policies to review tea party applications, including dispatching some of them to Washington to be vetted by headquarters.

“As prominent politicians publicly urged the IRS to take action on tax-exempt groups engaged in legal campaign intervention activities, the IRS treated tea party applications differently,” the staff report concludes. “Applications filed by tea party groups were identified and grouped due to media attention surrounding the existence of the tea party in general.”

This is in sharp contrast to the Democrats’ claim that while an Accountability Review Board was set to recommend Lerner’s ouster, it found no evidence of political bias.

Lerner is still subject to subpoena and may return to testify in either the House Ways and Means or Oversight committee. That investigation could have resulted in her termination.

Initially, she claimed that the IRS’s politically skewed targeting of conservative groups was driven by a handful of rogue employees in the Cincinnati, Ohio office where she worked.

But documents later surfaced, including some of her own emails, which contradicted that claim and appeared to point to senior managers in Washington, D.C. along with Lerner herself.

“In fact, there are many serious, unanswered questions that must be addressed so we can get to the truth,” he added.

The IRS said Monday that it “has taken decisive actions to correct failures in exempt organizations management, replacing top leadership throughout the chain of command.”

“Our goal is to restore the public’s faith and trust in the tax system,” the statement added. “We have sent nearly 400,000 pages of documents to Congress and facilitated dozens of employee interviews. We look forward to continuing to cooperate with Congress and other investigations.”

I can help the IRS out here. The American people have never had faith and trust in the tax system. It’s immoral, it’s crooked, and it’s manipulative. It will always be that way until the IRS is totally done away with and the repeal of the Sixteenth Amendment. Then, maybe we can begin to have faith and trust in proper taxes. Until then, the IRS’ claims to seek to restore something that has never been are nothing more than hot air.

Finally, the Daily Mail informs us that if Lois Lerner’s position as a top IRS enforcer “were to place her in a special ‘law enforcement officer’ retirement category,” the amount she would receive would be around $61,700. Additionally she will also receive credit for 50 percent of any unused sick leave, and she is able to seek employment in a law firm or advocacy group and maintain her pension. Oh goodie!

I seriously have to ask what Doug Powers asked: Has any accountability review board, in the last few years, ever actually held anybody accountable for anything?