Thank you Senator Ted Cruz for helping we true Conservative Republicans in our efforts to weed out the RINOS in both the House and Senate.

Yesterday, after last week’s 21-hour ‘non-filibuster’ filibuster by Texas Senator Ted Cruz…with a little help from his friends Senators Mike Lee, Marco Rubio, and Rand Paul…the Senate reached a vote on the Republicans efforts to avoid a shutdown of the government and to defund the dreaded monstrosity known as ObamaCare.

Sadly, our side lost as 23 RINOS sided with the Democrats, and in a vote of 79 to 19 invoked cloture and formally ended debate on H.J. Res 59 (Continuing Appropriations Resolution, 2014), and helped put into place the funding mechanism to destroy America’s health care system, America’s jobs market, and according to leading economists…one-sixth of the American economy. 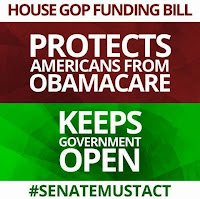 And we thank them for that.

As Senator Marco Rubio said after the vote, “Today, we had an important opportunity to stand with America’s working class and defund ObamaCare before it continues to hurt people even more. That did not happen. I will continue to fight to stop ObamaCare in its entirety and replace it with an alternative that truly gives Americans more affordable high-quality health care options without hurting their jobs, incomes and current health plans they are happy with.”

And hopefully, he will get all our support in that.

So back to the House the bill now goes and there will be a fight…a BIG fight…as Republican lawmakers in the House must pass a bill…any bill…and send it back to the Senate.  However, they have said time and time again that ObamaCare is a disaster for the middle class, and that they will NOT pass any bill that funds it…and remember that funding comes from the House. So by vowing to reject the restoration of funding, the Republicans may instead decide to send the bill back to the Senate again with more changes. But with a government shutdown hanging in the balance House leaders have NOT yet decided exactly how they will proceed.

But as our hero Senator Ted Cruz said, when the bill returns to the Senate, “I hope that all 46 Republicans are united against ObamaCare and standing with the American people.”

Unfortunately for ‘We the People’ with the now exposed for all to see RINOS in the Senate…led by the likes of John McCain and Lindsey Graham…that will probably NOT happen.

And at the heart of yesterday’s vote…of yesterday’s betrayal…is the procedure known as ‘cloture’… the only procedure by which the Senate can vote to place a time limit on consideration of a bill, thereby overcoming a filibuster and forcing a vote.  However, that only works in the Senate NOT for the House and some in the House have already hinted about a filibuster when the bill comes back to them.

But with that comes Barack HUSSEIN Obama’s threat that if the House does NOT pass the Senate bill as is that the government will shut down early next week. In a televised statement from the White House after the Senate vote, Obama accused the Republicans of “political grandstanding” and said the GOP-controlled House now has the fate of a potential government shutdown in its hands.

Oh how that man loves to blame everybody but where the true blame belongs…with himself.

Bloviating that he will NOT negotiate with Republicans (but he will negotiate with Iranian terrorists) over the debt ceiling increase because he’s heard that a few Republicans have alluded that they might now tie the defunding of ObamaCare to the debt ceiling debate, Obama acts once again like a spoiled child stamping his feet as he whined, “My message to Congress is this: do not shut down the government, do not shut down the economy, pay our bills on time.”

Do NOT do this…do NOT do that…Obama does NOT understand that NO one takes his threats seriously…NOT after his ‘red lines’ fiasco, and Vladimir Putin proving himself to be more of a leader than he is.

And NO matter his bloviations Obama does NOT get that we could pay our bills on time if he had bothered to learn Economics 101…do NOT spend more than you take in…if he understood that the government being shut down is NO biggie as it’s been shut down many times before…if he accepted as fact that our economy would be so much better if he had even an inkling of how to run the ‘business’ of government…if he would admit that he has NO idea how to create jobs and put Americans (legal Americans) back to work…and if he and those who orbit around him would accept the fact that one being a ‘community organizer’ does NOT make for a successful president.

And the 23 RINOS who voted ‘YES’ on cloture are now exposed for all to see for they knew full well that a vote to invoke cloture was indeed a vote for ObamaCare, and they knew full well that a ‘YES’ vote would allow ObamaCare to grow and thrive at the expense of the middle class who are hurting enough under this miserable excuse of a president and his equally miserable administration… and they voted for cloture  anyway.

So again many thanks to America’s new shining star, Senator Ted Cruz, for standing strong against ‘Prince’ Harry Reid who wished he would have just shut-up and gone away, and to the 19 Republican Senators who were strong of conviction and courageous enough to join him and vote the will of their constituents…to vote on behalf of ‘We the People’…to vote ‘NO’ on a bill that is NOTHING but a nightmare come to life…and let the 23 RINOS who did NOT know that they will hear our voices loud and clear come their re-election day…a day that can’t come soon enough for me.