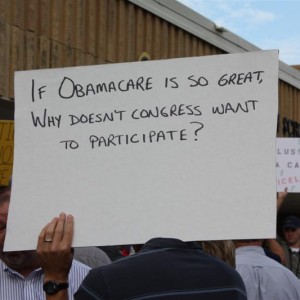 Barack Obama promised to fundamentally transform America, and when it comes to health care he has definitely kept his promise.  Thanks to Obamacare, health care spending is up, health insurance premiums are up, the number of hours Americans are working is down and employer-based health insurance is becoming an endangered species.  Of course employer-based health insurance will not disappear completely any time soon, but it has been steadily shrinking for over a decade, and Obamacare will greatly accelerate that decline.  If you go back to 1999, 64.1 percent of all Americans were covered by employment-based health insurance.  That was pretty good.  Today, only 54.9 percent of all Americans are covered by employment-based health insurance, and now thousands upon thousands of U.S. employers are considering reducing the scope of the health plans they offer to employees or eliminating them altogether due to Obamacare.  If you are thinking that this sounds like a potential nightmare for millions of Americans families, you would be exactly right.

There have already been widespread reports of companies dropping health insurance, but nobody knows for sure how widespread the carnage will be.  According to Businessweek, the surveys that have been done up to this point have come up with widely varying results…

A Deloitte study last year suggested 10 percent of employers would stop offering group health plans. A widely criticized McKinsey report from 2011 put the number as high as one-third. The Congressional Budget Office’s latest projections suggest 8 millionfewer people will be covered by employer plans five years from now under the ACA than without it. Many of them will get policies through health insurance exchanges instead.

But what everyone does agree on is that employer-based health coverage will continue to diminish.

And we are already watching this happen right in front of our eyes.  Just this week, the Wall Street Journal reported that the largest security guard firm in the United States is dropping health coverage for 55,000 employees…

The nation’s largest provider of security guards plans to discontinue its lowest-cost health plans and steer roughly 55,000 workers to new government-sponsored insurance exchanges for coverage next year, in the latest sign of the fraying ties between employment and health care.

The U.S. arm of Sweden’s Securitas AB is among more than 1,200 employers that offer the kind of bare-bones health plans that must be phased out beginning Jan. 1 under the health-care law. Nearly four million people are enrolled in these so-called mini-med plans, which cap benefits to participants, sometimes at as little as $3,000 a year.

“The mini-meds go away and we’re not replacing them,” said Jim McNulty, a spokesman for Securitas’s U.S. operation. “Their option is to go to the exchanges.”

Other big employers, including Darden Restaurants Inc., Home Depot Inc. and Trader Joe’s Co., say they will stop offering health insurance to part-time workers, and will direct those employees to the state exchanges. Darden, Home Depot and Trader Joe’s previously offered mini-meds to their part timers.

Trader Joe’s, the grocer once lauded for providing health care coverage to its part-time workers, is about to push those employees off its plan.

According to a memo obtained by the Huffington Post, the company will stop covering employees who work less than 30 hours per week.

The change is set for the start of 2014. Instead of insurance, workers instead will get a check for $500 in January.

“Depending on income you may earn outside of Trader Joe’s, we believe that with the $500 from Trader Joe’s and the tax credits available under the [Affordable Care Act (ACA)], many of you should be able to obtain health care coverage at very little if any net cost to you,” said Trader Joe CEO Dan Bane in the memo.

But it is incredibly difficult to try to support a family on a part-time job.  Sadly, the quality of our jobs continues to decline rapidly and only 47 percent of all adults have a full-time job in America today.  This is only going to continue to get even worse under Obamacare.

As a result of these trends, more Americans are going to be forced to go out and buy health insurance “on the individual market”.  When they do, they are likely to be in for a really nasty surprise…

Andy and Amy Mangione of Louisville, Ky. and their two boys are just the kind of people who should be helped by ObamaCare. But they recently got a nasty surprise in the mail.

“When I saw the letter when I came home from work,” Andy said, describing the large red wording on the envelope from his insurance carrier, “(it said) ‘your action required, benefit changes, act now.’ Of course I opened it immediately.”

It had stunning news. Insurance for the Mangiones and their two boys,which they bought on the individual market, was going to almost triple in 2014 — from $333 a month to $965.

The insurance carrier made it clear the increase was in order to be compliant with the new health care law.

Are you ready to have your health insurance premiums potentially double or triple?

Across the country, insurers are sending out ObamaCare-induced health plan death notices to untold tens of thousands of other customers in the individual market. Twitter users are posting their ObamaCare cancellation notices and accompanying rate increases:

Linda Deright posted her letter from Regency of Washington state: “63 percent jump, old policy of 15 yrs. cancelled.” Karen J. Dugan wrote: “Received same notice from Blue Shield CA for our small business. Driving into exchange and no info since online site is down.” Chris Birk wrote: “Got notice from BCBS that my current health plan is not ACA compliant. New plan 2x as costly for worse coverage.” Small-business owner Villi Wilson posted his letter from HMSA Blue Cross Blue Shield canceling his individual plan and added: “I thought Obama said if I like my health care plan I can keep my health care plan.”

In fact, this even happened to one member of Congress.  U.S. Representative Cory Gardner had purchased health insurance on his own because he wanted to experience what his constituents were going through, and he recently got a letter informing him that his old plan had been “discontinued”…

“After my current plan is discontinued,” he wrote last week, “the closest comparable plan through our current provider will cost over 100 percent more, going from roughly $650 a month to $1,480 per month.” He now carries his ObamaCare cancellation notice with him as hardcore proof of the Democrats’ ultimate deception.

Is this what Obama was talking about when he promised that we could keep our old health insurance plans if we were happy with them?

In the end, millions upon millions of us are going to get pushed on to the Obamacare health insurance exchanges.

We were promised that there would be lots of competition and that prices would be reasonable.

Unfortunately, in some areas of the country it turns out that the “exchanges” are turning out to be “monopolies” where consumers will only have one company to choose from…

“Although seven insurance companies currently operate in North Carolina, under the new Obamacare exchanges, those options will dwindle down to one in the majority of counties,” Ellmers said Thursday following the disclosure of figures by federal health officials showing that more than 60 percent of North Carolina counties will have only one insurance provider option under Obamacare: Blue Cross Blue Shield.

“The whole point of an online marketplace was to provide options, so North Carolinians could go online, compare prices, and choose plans from different companies. That is how competition is supposed to work!,” Ellmers said.

Beginning October 1 under Obamacare, Blue Cross Blue Shield will be the only health insurance provider serving the entire state of North Carolina in the new Obamacare exchanges, serving all 100 of the state’s counties. Its competitor Coventry Health Care, which is owned by Aetna, will only reach 39 counties.

That leaves 61 counties, or 61 percent of all the state’s counties, in a Blue Cross Blue Shield-only zone.

Not only that, but a lot of these exchanges are not even going to be ready to function properly on October 1st.  For example, according to The Washington Post, the D.C. “health marketplace” is a complete and total mess at this point…

Just days away from launch, the District of Columbia’s health marketplace is announcing a pretty significant delay.

While the D.C. Health Link will launch a Web site on October 1, shoppers will not have access to the their premium prices until mid-November. The delay comes after the District marketplace discovered “a high error rate” in calculating the tax credits that low- and middle-income people will use to purchase insurance on the marketplace.

The insurance marketplaces, if working as plan, are supposed to spit out an estimate for a tax credit after a shopper enters in some basic information about where she lives and how much she earns. In the District, that won’t happen next month. Instead, the eligibility determination will be made “off-line by experts” by early November.

So who is going to benefit from this new system?

Not that they were hurting under the old system either.  They have been raking in gigantic mountains of cash for years while trying to provide as little health care as possible.  For much more on this, please see my previous article entitled “50 Signs That The U.S. Health Care System Is A Gigantic Money Making Scam“.

For the rest of us, Obamacare is going to be even worse than the old system.  A 2013 Health Care Survey that polled 200 top health care professionals discovered the following about what they believe Obamacare will bring…

— 37 percent, “The law still allows insurance companies to be the middleman.”

So Americans are going to pay more, get worse care, have more paperwork and a more complicated system, and they are likely to die younger too?