There is an all-out effort to demonize gun owners in the United States today.  Those that own guns are repeatedly portrayed as being uneducated, mentally deficient racists in the mainstream media.  No evidence is ever produced to actually back up those claims.  Gun owners regularly make lists of “potential terrorists”in official government documents, and many government officials openly regard them as ultra-paranoid “conspiracy nuts” that are a serious threat to national security.  Of course the truth is that gun owners are actually among the most law-abiding and patriotic people in the entire nation, but that doesn’t really fit with the radical gun control agenda of the progressive elite.  In order to move their agenda forward, they must make gun owners look bad, and they will go to ridiculous extremes in order to achieve that goal.  And to a certain extent, it is working.  As you will see below, some large financial companies no longer want to conduct business with gun owners, and just the sight of a gun is enough to get people freaking out and calling the police in many communities in America today.

Never underestimate the power of propaganda.  Just think about it – pretty much the only time that advocates for gun owner organizations are invited to appear on the mainstream media is when the big news organizations think that they can make them look bad.  Other than a few token appearances by pro-gun advocates, most of the time it is a relentless flood of anti-gun messages on the mainstream news.

And often the anti-gun messages that Americans are being fed are absolutely absurd.  In fact, they would be absolutely hilarious if so many people were not taking them so seriously.

For example, Michael Moore actually believes that the reason why so many “white people” want to own guns is because they are “afraid of black people”…

“It’s because too many white people are afraid of black people. Period. The vast majority of the guns in the U.S. are sold to white people who live in the suburbs or the country. When we fantasize about being mugged or home invaded, what’s the image of the perpetrator in our heads? Is it the freckled-face kid from down the street – or is it someone who is, if not black, at least poor?”

It is easy to laugh at such bizarre comments, but millions of people actually take these jokers seriously, and they are having an impact.

Just recently, the owner of one of the largest gun stores in America, Hyatt Gun Shop, was informed by his credit card processor (Authorize.net) that he had violated their service agreement and they no longer wanted his business.

So what did Hyatt Gun Shop do wrong?

Yes, I know that this sounds crazy, but this is actually happening.  The following is the text of the actual email that Larry Hyatt received…

These sections include, but are not limited to, the sale of firearms or any similar product.

Accordingly, pursuant to Section 4 of the Acceptable Use Guidelines, your ability to access and use the Authorize.Net Services will be terminated on September 30, 2013.

And in case you are tempted to think that this is not a big deal, it should also be noted that Authorize.net is a fully-owned subsidiary of Visa USA.

Are big financial companies such as Visa going to start simply refusing to do business with anyone that sells guns?

If you believe that this could never happen, just check out what the owner of American Spirit Arms said about his dealings with Bank of America on Facebook…

My name is Joe Sirochman owner of American Spirit Arms and I wanted to share my recent experience with Bank of America (which we have been doing business with for over 10 years)…. Everyone is familiar with the latest increase in guns sales, dealers selling out of inventory, Manufacturers back logged for months, large revenue all generated in the last two weeks …. American Spirit Arms is no exception to the overwhelming demand. What we have experienced is that our web site orders have jumped 500% causing our web site E commerce processing larger Deposits to BANK OF AMERICA ..Well, this through up a huge RED Flag with Bank of America . So they decided to hold the deposits for further review, meaning that the orders/payments that were coming in through the web, (being paid by the customer and that were shipped out by American Spirit Arms), the BANK was keeping (UNDER REVIEW )..as you could imagine this made me furious…After countless hours on the phone with BANK OF AMERICA I finally got a Manager in the right department that told me the reason that the deposits were on hold for FURTHER REVIEW …HER EXACT WORDS WERE ….. “WE BELIEVE YOU SHOULD NOT BE SELLING GUNS and PARTS ON THE INTERNET”

But of course it is not just financial companies that are demonizing gun owners.

Some more examples of this phenomenon were cited in a commentary authored by Dr. Michael S. Brown…

In San Clemente, California, a school groundskeeper who had won a large sexual harassment settlement from the local school district was the target of a dramatic SWAT team raid on his residence. He was held on one million dollars bail for the heinous crime of possessing allegedly stolen rakes and buckets. Someone, perhaps seeking revenge, tipped off the police that the man had a large gun collection.

News reports contained no mention of the man making threats or plotting violence; he simply owned guns. A school district administrator was quoted as saying, “I’m personally horrified that someone who has daily contact in the vicinity of children and teachers owned the arsenal he apparently had.” Other officials crowed that they had prevented another Columbine. It is unlikely that the man will receive justice in a culture that vilifies gun owning citizens in this manner.

At a large university in Seattle, a white collar employee with an excellent work record was involved in a minor dispute over computer access. When he was called into the administrator’s office to discuss it, two campus police officers were present. “We know you have a concealed weapons permit. Are you armed?” He was not, but the damage to his reputation had already been done. Apparently, a coworker who was competing with the man for a position had tipped off the administration that he was a gun owner.

We are rapidly getting to the point where being a gun owner in America will automatically make you an outcast.

And progressive strategists don’t plan on letting up.  In fact, it was recently revealed that they have drafted an 80 page “how-to manual” that actually encourages gun control advocates to emotionally exploit major shooting incidents to advance the cause of gun control…

Democratic strategists have drafted a how-to manual on manipulating the public’s emotions toward gun control in the aftermath of a major shooting.

“A high-profile gun-violence incident temporarily draws more people into the conversation about gun violence,” asserts the guide. “We should rely on emotionally powerful language, feelings and images to bring home the terrible impact of gun violence.”

“The most powerful time to communicate is when concern and emotions are running at their peak,” the guide insists. “The debate over gun violence in America is periodically punctuated by high-profile gun violence incidents including Columbine, Virginia Tech, Tucson, the Trayvon Martin killing, Aurora and Oak Creek. When an incident such as these attracts sustained media attention, it creates a unique climate for our communications efforts.”

If you would like to read the entire manual, you can find it right here.

And of course Barack Obama continues to issue more executive orders about guns almost every time a major shooting incident makes the news.

But with conservatives in charge of the U.S. House of Representatives, he knows that there is a limit on what he will be able to do for now.

So the Obama administration has been busy pushing the new international treaty on arms regulation that it hopes will advance the cause of gun control.  Fortunately, many gun owner organizations are deeply concerned about this and they are sounding the alarm.  The following is from a recent Fox News article about this new treaty…

But the treaty also advocates keeping data of arms purchases, which the NRA and other groups say could be used as an international log to keep tabs on gun owners.

Further, those records should be kept for a minimum of 10 years, the treaty states — which NRA leader Wayne LaPierre has referred to as “nothing more than gun registration by a different name.”

Because the treaty’s language is so broad, LaPierre has said that “manufacturers of civilian shotguns would have to comply with the same regulatory process as a manufacturer of military attack helicopters.”

One thing is for sure – the attacks from the progressives on gun owners are not going to stop.

It does not matter to them that a study that was recently published in the Harvard Journal of Law & Public Policy discovered that nations that have more guns tend to have less crime.

It does not matter to them that approximately 200,000 women in the United States use guns to protect themselves against sexual crime every single year.

Apparently what those women are supposed to do is be sexually assaulted first and then call the police for help.

That sounds absolutely insane, but that is the world that the progressives want us to live in.

Let us hope that they do not win. 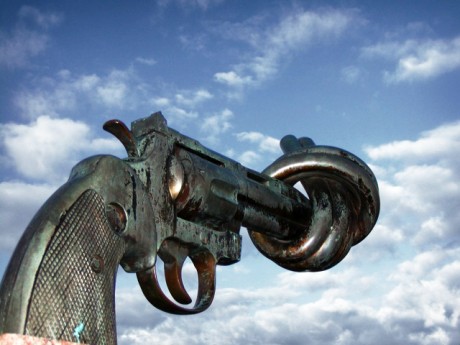