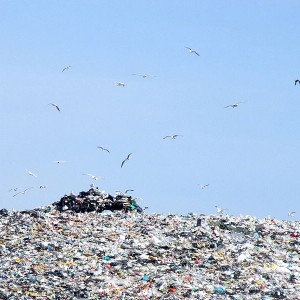 Could that headline actually be true?  Do Americans waste about 40 percent of all the food that we produce?  That sounds like an absolutely crazy number, but it is actually quite accurate according to a study conducted by the Natural Resources Defense Council.  What the NRDC discovered is that approximately 40 percent of our total food supply is either thrown into dumpsters by grocery stores, is discarded by restaurants, never gets harvested on our farms, or is thrown into the garbage by consumers in their homes.  Even though 47 million Americans are on food stamps and millions of children go to bed hungry in this country every single night, we continue to waste approximately 263 million pounds of food every single day of the year.  One day people will look back and regard us as probably the most wasteful society in the history of the planet.

So where does all of that food go?

Well, according to a recent Seattle Times article, “food waste” takes up more space in our landfills than anything else does…

Last year, the NRDC found that Americans throw out as much as 40 percent of the country’s food supply each year, adding up to $165 billion in losses.

Food waste makes up the largest portion of solid trash in landfills, according to researchers.

Some $900 million of expired food is dumped from the supply chain annually, much of it a result of confusion. Misinterpreted date labels cause the average American household of four to lose as much as $455 a year on squandered food, according to researchers.

The expired food that gets wasted is one of my personal pet peeves.

I don’t do this a lot, but today I am going to share a personal story with you.

Earlier today I was out running errands and I decided that I wanted to pick up some mini-cupcakes from Safeway that I just love.  I do try to eat a healthy diet, but I do also like a treat from time to time.  So I got over to Safeway, and I noticed that the only mini-cupcakes that they had out were ones with chocolate frosting, but I wanted ones with vanilla frosting.

So I went up to the bakery counter and there was nobody there, but behind the counter I saw a stack of several containers of vanilla cupcakes.  I waited until the bakery lady got back and I asked her if I could have them.

I was astounded when she very firmly told me that I could not buy them.

She said that it was against regulations.

I implored her to sell them to me.  I explained that I had come over to Safeway just to buy them and I didn’t care if they were a little old.

Again she very firmly told me that I could not buy them.

I could not understand this.  I knew that the cupcakes were just going to be thrown out, so I asked to speak to her manager.

After a few moments her manager came over and I was once again told very firmly that under no circumstances would I be able to buy the cupcakes.

So needless to say, I left the store with a sad look on my face and without any cupcakes.

Now of course I probably didn’t need the cupcakes anyway.  They are not healthy for me.  But big chains such as Safeway throw away massive amounts of very good food as well.  The level of the waste that goes on is absolutely astounding.

Meanwhile, the number of Americans that are dealing with hunger and malnutrition grows with each passing day.  I want to share with you an excerpt from a recent article authored by Jason Ford entitled “I Work On The Breadline“…

I work as a cashier at a nationally known discount store. I sell clothing, cleaning products, house wares and food. The people I sell to are people of all colors, races, ages and sex, but most of them have one thing in common; EBT cards. I would say about half of every transaction I do is paid for with an EBT card. Sometimes people will use three different methods of payment. They will use whatever is left on their EBT card, then use whatever is left on their debit card, and then scrape their purse to find the remaining balance, and sometimes they still don’t have enough.

Another common trait of the people I serve besides the poverty is the poor health. The food I sell is not healthy, by any stretch. I sell potato chips, candy bars, bread, canned food, ice cream, soda, packaged meat, cigarettes and alcohol. I noticed quickly that a common ingredient of most of the foods is sugar and grains. Sugar and grains are easy to grow and produce cheaply and are used as fillers in processed food to cut cost and mask the taste of other questionable ingredients. Grains work in conjunction with sugars to inflame the body and compromise the immune system. Grains and sugars also have no nutritional value besides calories, so on top of inflaming the body; they do not provide the sustenance the body needs to survive. As the functions of the body require these nutrients the diet lacks, the body sucks these minerals from the bones, teeth and brain. Bone loss, and tooth decay and decreased brain function are the unfortunate symptoms of malnutrition. The poorest of the customers I serve are also the sickest. I have witnessed toothless mouths in the young and old. Mental retardation is also a common trait among many of them. I have even witnessed one unfortunate woman whose skin was a pale green color. These people are dying a slow starvation and they don’t even know it.

Doesn’t that just break your heart?

People are living like that, and yet America discards 263 million pounds of food every single day.

Something is fundamentally wrong with the way our system works.

So what is society going to do as the number of hungry people continues to grow in this country and around the world?

Well, according to ABC News, some scientists plan to feed them with flour made out of bugs…

A team of MBA students were the recipients of the 2013 Hult Prize earlier this week, providing them with $1 million in seed money to produce an insect-based, protein-rich flour for feeding malnourished populations in other countries. The product is called Power Flour.

“It’s a huge deal because we had a very ambitious but highly executable five-year plan in place,” said team captain Mohammed Ashour, whose team hails from McGill University in Montreal. “So winning this prize is a great step in that direction.”

Ashour, along with teammates Shobhita Soor, Jesse Pearlstein, Zev Thompson and Gabe Mott, will be immediately working with an advisory board to recruit farmers and workers in Mexico, where a population of roughly 4 million live in slum conditions with widespread malnutrition.

“We will be starting with grasshoppers,” Ashour said.

Are you ready for a “protein-rich flour” made out of grasshoppers?

I know that I am not.

And in Japan, scientists have actually been working on a way to create meat out of poop.  You can read more about that right here.

Perhaps if we just quit wasting so much food we would be able to feed everybody without resorting to such craziness.

These days, an increasing number of Americans are fighting back against the colossal waste that they see all around them.  Some have even chosen to take advantage of the waste by regularly going “dumpster diving”.  The following is how I described “dumpster diving” in one of my previous articles…

Have you ever thought about getting your food out of a trash can?  Don’t laugh.  Dumpster diving has become a hot new trend in America.  In fact, dumpster divers even have a trendy new name.  They call themselves “freegans”, and as the economy crumbles their numbers are multiplying.  Many freegans consider dumpster diving to be a great way to save money on groceries.  Others do it because they want to live more simply.  Freegans that are concerned about the environment view dumpster diving as a great way to “recycle” and other politically-minded freegans consider dumpster diving to be a form of political protest.  But whatever you want to call it, the reality is that thousands upon thousands of Americans will break out their boots, rubber gloves and flashlights and will be jumping into dumpsters looking for food once again tonight.

Who knows – perhaps some enterprising young dumpster diver will end up fishing the vanilla cupcakes that I wanted out of Safeway’s dumpsters this evening.

It is amazing what some of these dumpster divers are able to recover from “the trash”.  In North Carolina, one man even takes his son dumpster diving with him…

A programmer by day, Todd takes to the streets of North Carolina by night, digging through Dumpsters at drug stores and grocery stores all around his rural neighborhood.

“You would be simply amazed at what businesses throw out,” he said. “I’ve only had to buy two loaves of bread all year. … Last week I had a trunk full of cereal, cookies, chips and ramen noodles.”

Todd slinks in and out of smelly places with low-light flashlights to evade rent-a-cops who will shoo him away.  Most nights, his 14-year-old son comes along.

Unfortunately, dumpster diving is not as easy as it used to be.

As dumpster diving has soared in popularity, some grocery stores have responded by putting locks on their dumpsters.

And in some areas of the country, police have even started regularly arresting dumpster divers.

But in the end, dumpster diving was not going to be a permanent solution anyway.

A permanent solution would be to quit wasting so much food.

I applaud the grocery store chains that choose to donate their expired food to homeless shelters and food banks.

We need to see a lot more of that going on.

And in our own homes we need to find ways to give more food away and waste less of it.

All of this needless wasting of food does not have to happen.  Let’s work together to find some solutions.