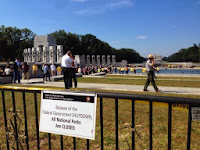 An open-air memorial, completed in 2004, and funded almost entirely by private donations (mine included)…funded to the tune of $197 million dollars in cash and pledges…funded by veterans, school children, corporations, and everyday Americans just like you and me. Costing $182 million to build, this memorial obviously exceeded its fundraising goals with the excess monies raised now being held on deposit with the Treasury Department to be used by the American Battle Monuments Commission to benefit this memorial and this memorial alone…in other words for any maintenance and repairs needed as the years go by. 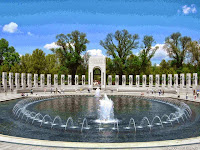 With its granite columns standing strong and proud and its reflecting pool catching the tears of many, the majestic ‘World War II Memorial’ (with access 24/7-365) pays homage to the 16 million brave Americans who fought against an evil never before seen and is the monument of remembrance to the 400,000+ Americans killed fighting to keep the world free in what became known as ‘the defining event of the 20th century’…an event in which good eventually triumphed over evil but at such a tremendous cost in human suffering and lives lost.

And as we lose more of the ‘Greatest Generation’ as each day passes…a generation who gave everything to rescue the world from tyranny…many of those still with us have just one wish…to visit the memorial dedicated to their bravery, their honor, their sacrifice, and their ultimate triumph…and to remember through a haze of tears and sad smiles their fellow comrades who did NOT make it home.

And now enter a government shutdown initiated in its entirety by misguided and misplaced ideology from liberal Democrats and an unyielding president who disgraces the title of ‘Commander-in-Chief.’

And while the shutdown is built mostly upon leftist bravado and scare tactics more than it is on anything of substance, it does unfortunately affect America’s national treasures…treasures that come under the auspices of the National Parks Services …and the World War II Memorial sadly falls into that category.

And as other famous American treasures the likes of our national parks, the Smithsonian, the Lincoln and Washington Memorials, and the national zoo just to name a few, also are affected with closing, the World War II Memorial dedicated to those who gave everything so our generation and future generations could be, do NOT have time to wait out a shutdown…a closing of a place of quiet reflection where memories come alive and peace descends upon those whose time is drawing to an end.

But the World War II Memorial…along with the other memorials on the Mall…was closed as part of the government shutdown that went into effect at midnight on Tuesday. And when on Tuesday morning a group of 92 Mississippi Gulf Coast Honor Flight Veterans (Honor Flights flies WWII veterans to D.C free of charge so that these brave men and women may see the very memorial dedicated to their service and sacrifice) were refused entrance to the memorial they decided that NO government shutdown was going to stop them from entering the place they gave so much to see built.

With some being pushed in wheelchairs and some walking with canes…these frail and elderly heroes took down the barriers and pushed aside the rolling fences that blocked their entrance, defying the government shutdown and in doing so they showed more guts, more courage, and more fortitude than any in Congress ever could…making those in power listen to them…listen to their loud and clear voices…as America stood behind them and cheered them on with shouts of, “Thank you for your service!”

“It’s the best civil disobedience we’ve seen in Washington for a long time,” Rep. Bill Huizenga (R-Mich.)…one of the Congressmen who helped them push the barriers aside…told those who made it inside the memorial.

And how right he is as this simple act of defiance by a group of aged heroes whose valor has NOT dimmed as they watch their twilight years pass by made their stand all the more powerful for this simple statement that NO government shutdown…NO barricades put in place on orders of a president who does NOT honor them or their service…will keep them out of the place they so rightly built with their blood…with their lives…with their courage. 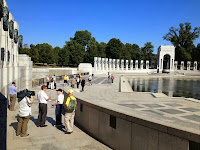 And because of their actions on Tuesday and again yesterday, while the memorial remains closed to the general public, hundreds of WWII veterans have now been given access to the memorial under the guise of ‘First Amendment Activities (whatever that means in Obamaspeak), and while protesters stand near the entrance to lend their support for the ‘Greatest Generation’ and their frustration with a government that tried to deny them access to ‘their’ memorial…’their’ memorial that they have every right to visit for soon there will be none left from that generation and honoring them will be but honoring a memory of those who gave their all for freedom…for God…for country. 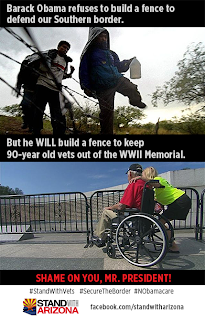 And as these veterans live again within their solemn and private remembrances, Republican members of Congress questioned why an open-air monument would ever be closed because of the government shutdown. And last night the RNC pledged enough funds to keep the memorial open for at least the next 30 days, and as expected the Democrats claim this to be a publicity stunt. But you know what…if it allows our WWII veterans to freely visit this sacred place of memories then stunt or NO stunt we must let it be.

And as far as Barack HUSSEIN Obama and his cohorts are concerned…just try closing down and stopping our WWII veterans from once again entering their memorial…and there will be one memorable photo-op that rest assured they will NOT want to see.