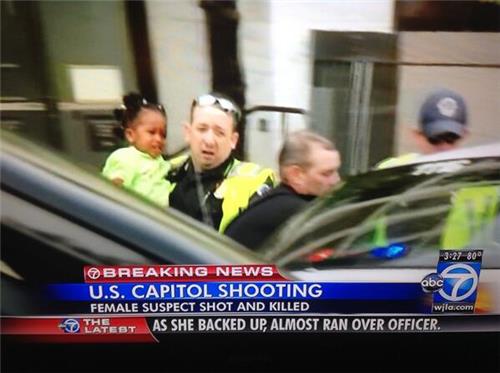 I got an email from Tim Brown on Thursday that shots had been fired at the capitol. He had written a preliminary article and I published it. No one really knew what was going on at that point and it ended up being much different than advertised.

I was busy with my twins at the time. Ali and Skyla were at the park and it was my job to do what a good Daddy does. I wasn’t watching CNN or Fox News. We were watching Curious George. Not that a 3-month old would know the difference but it’s the principle of the thing. 🙂

I didn’t actually get to investigate what happened until late Thursday Night and I think I am going to be sick to my stomach. I’ve seen pictures of a very pretty little girl and heard a story of her unarmed mother being shot dead in front of her as the media celebrated. Wow! Just wow!

Picture of child being ushered to safety by police (possibly child who was in car with female suspect). pic.twitter.com/dPYJYrgQTv

I’ve seen tweets from Senators who had their chests bowed out acting like they were going to bring a sword to a gun fight and I have seen praised heaped onto a police force that just killed an unarmed woman. I am way behind everyone else on this story so rather than try to educate you on the facts, I just need to rant.

They say this woman had a history of mental illness. OK, so that’s a good reason to kill her, correct?

They say she rammed the front gates, or some sort of barricade, and then ran from police. I’m surprised they didn’t scramble fighter jets. Kudos on the restraint.

NOT ONCE did she fire upon these officers for in the end they found that she had no gun.

The officers failed to stop the vehicle so they took matters into their own hands and shot her dead.

What was the woman guilty of? Let’s leave the fact that it was in D.C. out of this because I get sick of that crap. Screw them and their Ivory Tower lifestyle. 99% of them have never lived in the trenches.

She probably caused some property damage and attempted to trespass.

In her attempted escape she may have injured a police officer. I am seeing conflicting reports. One officer was injured in a crash by his own hands but I think there was second who was struck by her vehicle. For the sake of argument let’s say it is true. I am no attorney but I will call that vehicular assault. I am sure the cops that were there would call it attempted murder, but…

It takes a really bad driver to try to kill someone with a car and miss. Just sayin’.

So a crazy lady tore some stuff up, ran, accidentally hit a cop who was in her escape lane and was executed in front of a toddler for that. I must interject here that I do not know for certain that this was her child but it is a fairly natural assumption.

The media is so in love with a good story and so worships those on Capitol Hill that they made this into a heartwarming story of courage by D.C. cops.

I read in a couple of different places that terrorism had been ruled out.

Don’t make me laugh. We have a Fort Hood killer that has been sentenced to death for bringing jihad to our military and the media won’t talk about that while the government is still calling it “workplace violence.” They won’t talk about real jihad, but they surely will call out the obvious. This was so obviously not a terrorist attack that even Al Qaeda would feel silly to try to take credit for it.

I appreciate the danger of a crazy motorist being lose in a city. I understand that. But these things happen all the time and being a police officer is a dangerous job. Citizens are told to pull over when we hear the sirens and there is a reason for that. Cops have to get in the mix but still uphold the law. It comes with the badge. When you take that job you accept a responsibility to uphold the law and not to just go around shooting people for no lawful reason.

You can not shoot an unarmed woman and leave her child as an orphan simply because she was crazy or because she drove into capitol gates instead of the store front at Family Video (which happened in my town last week).

I don’t give a sh*t if this happened in Washington D.C.

If this happened at my house would the cops be shooting to kill?

They would find a way to stop the car and arrest the woman. The child might still end up in state custody but at least she would not have to watch her mother get killed.

There is no way in hell this should have ever happened.

There is no justification and chances are that no one will ever have to answer for it because we are celebrating these cops as heroes rather than as rogues who crossed over the line of what was justified. We are celebrating the courage of a bunch of wussy Senators who probably hid under furniture and likely wet themselves.

That’s just my two cents. Turn your TV back to CNN and go read a Huff Post article if you don’t like what I am saying. It’s OK. You are entitled to live in your fantasy world.

I grew up in a city where I heard gun shots on a regular basis. It’s scary but I never acted like these painty-waisted legislators who I heard from yesterday. They honestly make me sick. I thought the sword thing (Pat Roberts) was a little over dramatic but I’d rather hear that then all of the sissified stuff I am hearing from people are supposed to be tough. In case anyone missed it, here is the sword comment:

Sen. Pat Roberts, R-Kan., was in his office in the Hart Building when he heard, “pop, pop, pop, and then pop again.” He thought it was the start of construction and thought, “God, I don’t need this all afternoon.” He said he soon found out that it was gunfire and that he then welcomed 10-15 Capitol visitors to his office when the lockdown order was given.

“I didn’t get my Marine sword down to do battle,” Roberts said. “But I was ready to.”

I am really sick of politicians who aren’t tough. Give me a guy who walks out onto the Senate floor with a t-shirt, ripped jeans, assorted tattoos and a hair down to his knees. I wanna see that guy slap the sh*t out of Lindsey Graham live on C-SPAN. I want to see him fight with police as they haul him off to jail for a cool down. I want to see America represented by real people and not by a bunch of silver spoon-fed idiots who do not understand that the real crime yesterday was a sick woman that was gunned down in front of her child.

If this happened in Iraq, and it was American soldiers gunning down an unarmed Iraqi woman who was attempting to flee, the media would eat them alive.

This was not a national security threat. It was just another exhibition of trigger happy cops and the police state we now live in. I leave you with Alex Jones. You can think he is crazy if you want but I would say he is one of the few voices of sanity I have heard in researching this. Some day people will wake up and figure out that Jones isn’t as much of a lunatic as they think. I just hope that awakening happens before it’s too late.

What do you think about what happened? Was it justified?