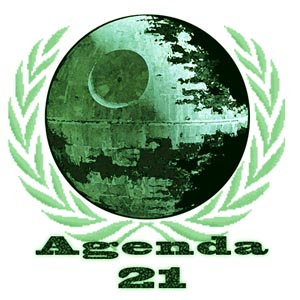 According to the 1967 book, The Report from Iron Mountain, lasting peace would be neither desirable nor sustainable nor create the legitimate right for government to rule society. Among its nine specific recommendations, war and militarism topped the list as government’s best overall solutions until and if there was an effective substitute for war, equal in stature and impact to war, capable of creating a similar national rallying point for the masses. Their highest recommendation other than war and militarism was… environmentalism.

“It may be, for instance, that gross pollution of the environment can eventually replace the possibility of mass destruction by nuclear weapons as the principal apparent threat to the survival of the species. Poisoning of the air, and of the principal sources of food and water supply, is already well advanced, and at first glance would seem promising in this respect; it constitutes a threat that can be dealt with only through social organization and political power. But from present indications it will be a generation to a generation and a half before environmental pollution, however severe, will be sufficiently menacing on a global scale, to offer a possible basis for a solution.” – The Report from Iron Mountain, Leonard Lewin, 1967

Environmentalism as a “basis for a solution,” and rallying point for the people has indeed arrived. The U.S. Government takes pride as a champion of the environment yet things are not as they appear. To the chagrin of those who stand for everything “green,” environmentalism is the sugar making it easier for the masses to swallow the advancement of global governance.

The story begins in 1968 with the founding of the Club of Rome at David Rockefeller’s estate in Bellagio, Italy. As an international non-governmental organization (NGO) think tank and consultant to the United Nations, the Club of Rome claims on its website to be “a group of world citizens, sharing a common concern for the future of humanity.” In keeping with their concerns, the organization recommended that the United Nations host the June 1992 United Nations Conference on Environment and Development (aka Earth Summit) in Rio de Janeiro, Brazil.

“The common enemy of humanity is man. In searching for a new enemy to unite us, we came up with the idea that pollution, the threat of global warming, water shortages, famine and the like would fit the bill. All these dangers are caused by human intervention, and it is only through changed attitudes and behavior that they can be overcome. The real enemy then, is humanity itself.” -The First Global Revolution, Alexander King, Co-Founder of the Club of Rome, 1991

More than 100 world leaders, including President George H.W. Bush, gathered in Rio for fourteen days of discussion on climate change and biodiversity. While attending, President Bush Sr., along with 178 other national heads, signed the Rio Declaration, a non-binding, non-partisan statement of broad principles for environmental policy called United Nations Agenda 21. Its global mission is to elevate the status of nature in order to preserve the natural world for future generations.

By executive order, in 1993, President Bill Clinton created and set up the President’s Council on Sustainable Development to translate UN Agenda 21 into public policy administered by the federal government. The Council’s sixteen-point document, “Sustainable America,” affirmed the commitment to develop and implement the Agenda’s environmental policies in the United States. Its three strategies, environment, economy, and social equity are represented by three interconnecting circles.

“Governments… should adopt a national strategy for sustainable development.”

ICLEI, also know as Local Governments for Sustainability, is the UN accredited Non-Governmental Organization (NGO) headquartered in Bonn, Germany charged with the local implementation of Agenda 21’s action plan in over 1,220 communities worldwide.

Sounds good on the surface, but upon closer scrutiny, Agenda 21 is the implementation plan of global governance from the local level on up. Since that day in Rio in 1992, the Agenda’s more sinister implications have come to light. “Soft” law of the original non-binding document had no legal teeth. However, as ICLEI infiltrates local communities, Agenda 21’s true colors shine through as “hard” regulations with associated penalties.

The phrase “sustainable development” gave Agenda 21 a positive public image but in the end, it only panders to and soothes the people with a marketing sound bite while nefarious new infrastructures are seamlessly put in place. Federalists in 1787 used the same sort of strategy when they distributed Federalist Papers to assure the public that all power of government was in the people; meaning a new constitution would in no way change the hard-won liberties gained by the American Revolution.

“UN Agenda 21/Sustainable Development is the action plan to inventory and control all land, all water, all minerals, all plants, all animals, all construction, all means of production, all information, all energy, and all human beings in the world.” –Behind the Green Mask, Rosa Koire, 2011

An advisor to President Clinton on his Council on Sustainable Development, Gary Lawrence, realized what the Council was up against with the American people. He discredited those who would disagree with their Agenda 21 plan of implementation and invented new language to fool the “segment of our society who fear ‘one-world government’ and a UN invasion of the United States through which our individual freedom would be stripped away… So we will call our process something else, such as comprehensive planning, growth management or smart growth.”

No matter what you call it, sustainable development, comprehensive planning, growth management or smart growth; it all boils down to the ideology of “communitarianism.”

communitarianism: Political and social philosophy that emphasizes the importance of community in the functioning of political life, in the analysis and evaluation of political institutions, and in understanding human identity and well-being. It was developed in the 1980s and 1990s in explicit opposition to the theoretical liberalism of thinkers such as John Rawls. According to communitarians, liberalism relies on a conception of the individual that is unrealistically atomistic and abstract; it also places too much importance on individual values such as freedom and autonomy. Its chief representatives include Amitai Etzioni, Michael Sandel, and Charles Taylor. See also collectivism. –Britannica Concise Encyclopedia. © 1995-2008 Encyclopaedia Britannica, Inc. (emphasis added)

Communitarianism promotes the exact opposite philosophy upon which America was founded. Private property was originally equated with wealth and the lawful rights of the individual protected by government. Though property ownership is still equated with wealth, Agenda 21 now turns the founding concept of private property on its head. As early as 1976, the American Planning Association referred to property-owner groups against government taking property without compensation (the legal theft of eminent domain) as “radical property rights organizations.” Farmers, especially, find troublesome the growing number of restrictions on the use of their own farmlands.

“Private land ownership is a principal instrument of accumulating wealth and therefore contributes to social injustice. Public control of land use is therefore indispensable.” -“Report of the U. N. Conference on Human Settlements”, Vancouver, Canada, May 31-June 11 1976

The story told in The Report from Iron Mountain is completely validated by Agenda 21. Around the world, a neo-feudalistic communitarian system is gaining strength in both ideological acceptance and practical application. Techno-aristocratic authority of those who would play God to protect nature from unthinking, naughty humans is growing, not diminishing. The Agenda 21 goal of “property fairness” extends a cookie-cutter concept to communities worldwide, consolidating populations into “green-belted” “sustainable” urban developments, uniform grids offering greater ease in the management of people.

Agenda 21 is poised to wipe out whatever might be left of the private property rights of individuals. Do not be deceived by the rhetoric. Sustainable development is underway where you live. An agenda of domination and control bleeds through the seemingly benign cover story in the land of the New Normal of nature’s rights.

“It is the duty of the patriot to protect his country from its government.” –Common Sense, Rights of man, and other Essential Writings of Thomas Paine, Thomas Paine, Anti-Federalist, author, 1791

Susan Boskey is author of the book, The Quality Life Plan®: 7 Steps to Uncommon Financial Security. The information in this book goes where no other personal finance book has dared. It not only exposes the systemic-root cause of the 2008-09 economic meltdown but, perhaps more importantly, provides critical strategies to help everyday people turn the tide and build real wealth. Learn more and purchase the book at http://www.AlternativeFinancialNow.com

More recently she has helped bring to market an important new book, Beyond the National Myth: waking up in the land of the free. America’s founding concept and practice of self-governance arose from a popular philosophical perspective of the late eighteenth century; one that set it apart in a world ruled by monarchs. Why and how so many of America’s original governing principles have changed is the big question requiring explanations more honest than politically correct. Available in its first 2013 edition at http://www.nationalmyth.org