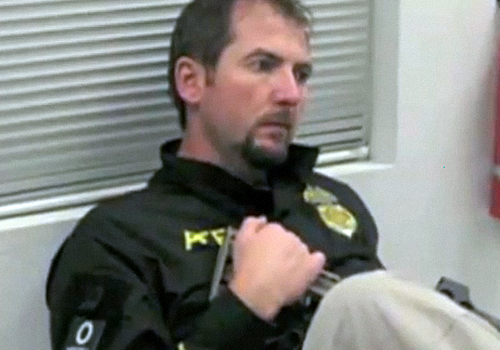 Former Bureau of Alcohol Tobacco and Firearms agent John Dodson is expected to publish a book titled The Unarmed Truth: My Fight to Blow the Whistle and Expose Fast and Furious in January 2014. However, he has been told that his manuscript doesn’t meet ATF’s “outside employment guidelines.” So is the ATF attempting to silence Dodson and restrict Freedom of Speech or are they attempting to keep the lid on the Fast and Furious scandal of the Obama administration?

Dodson was the first ATF agent to go public in 2011 with allegations that his superiors authorized a flood of semi-automatic weapons into Mexico instead of interdicting them, resulting in one of Barack Obama’s bloodiest scandals, and ultimately leading to the deaths of hundreds of Mexicans, Mexican officials, one US Border Patrol agent and one Immigration and Customs Enforcement agent.

The Bureau of Alcohol, Tobacco, Firearms and Explosives is blocking the main whistleblower in the Fast and Furious case from publishing a book, claiming his retelling of the Mexico “gun-walking” scandal will hurt morale inside the embattled law enforcement agency, according to documents obtained by The Washington Times.

ATF’s dispute with Special Agent John Dodson is setting up a First Amendment showdown that is poised to bring together liberal groups like the American Civil Liberties Union and conservatives in Congress who have championed Mr. Dodson’s protection as a whistleblower.

The ACLU is slated to become involved in the case Monday, informing ATF it is representing Mr. Dodson and filing a formal protest to the decision to reject his request to publish the already written book, sources told The Times, speaking only on the condition of anonymity.

According to a letter, sent to the ATF Deputy Director Thomas Brandon by the American Civil Liberties Union attorneys Lee Rowland and Mike German following censoring the Fast and Furious whistleblower:

“The backstory of how Border Patrol Agent Brian Terry was killed by guns under ATF surveillance ignited national debates over gun policy, border security, whistleblower protections, and the techniques deployed in Operation Fast and Furious. Agent Terry’s death and the law enforcement techniques it helped to expose attracted attention from the press, Congress, and the Justice Department Inspector General’s office. But now that one of the agents involved in the operation wishes to add his version to the public record on Fast and Furious, he has been forbidden from doing so by the very agency that sparked this national policy debate. We believe that both the procedures used to support ATF’s publication denial, as well as the prohibition on Agent Dodson’s manuscript itself, run afoul of constitutional protections for public employees.”

Deputy Ethics Official Greg Serres denied Dodson’s request after he drafted the manuscript detailing Operation Fast and Furious and submitted a request for outside employment on his own time. According to Dodson, he was told that ATF supervisors can deny outside employment “for any reason.” The specific reasons given to Dodson by ATF included a prediction that his book would have a “negative impact on morale” and a “detrimental effect [sic] on (ATF) relationships.”

“Therefore, your request to engage in outside employment is denied,” he said.

The ACLU’s letter goes on to state, “The denial letter states that ATF rules allow supervisors to refuse outside employment requests ‘for any reason’ (emphasis in denial letter). This policy grants supervisors in the chain of command boundless discretion to censor employee speech and deprive employees of the opportunity to understand- much less challenge- acts of censorship. Nor does this policy limit the reasons for denying a publication request to legitimate employment-related injuries; it grants supervisors the discretion to censor critical speech simply because it annoys the supervisor or embarrasses the ATF. In short, this ATF policy empowers supervisors to deny employees’ requests to speak, write, or teach for ‘any’ reason, or for no reason at all. Its unlimited scope is constitutionally impermissible.”

Dodson has backing from House Oversight Committee Chairman Darrell Issa and Ranking Member of the Judiciary Committee Chuck Grassley. Sources say that both of these men have written a foreward to the book. His book is also already listed on Amazon. Still he has been told by ATF supervisors that if he continues forward “there will be consequences.”

Understand that the ATF’s outside employment standards do not even meet Supreme Court standards, according to the letter from the ACLU.

“Operation Fast and Furious has been widely publicized and the involved agencies heavily criticized in both the media and Congress,” Rowland and German wrote. “It is difficult to imagine how further public scrutiny, even if it prolongs official embarrassment, could outweigh Agent Dodson’s interest in giving his view on the controversy.”

Katie Pavlich, who wrote the book Fast and Furious: Barack Obama’s Bloodiest Scandal and the Shameless Cover-Up, recalls how Dodson has been treated by the ATF following his blowing the whistle on the scandal:

The intimidation and retaliation against Dodson up to this point from the Department of Justice and ATF for exposing Operation Fast and Furious has been fierce and calculated. Dodson has been screamed at by supervisors in front of other agents for speaking out, reassigned and even had his weapons taken away while on duty without cause. Dodson was punished for “jumping his chain of command” by telling the truth about an operation that has left hundreds of people dead. In an effort to deny the operation’s existence, Dodson was smeared by former ATF Acting Director Kenneth Melson when he told the Baltimore ATF Field Division in early 2011 that Dodson was simply a “disgruntled” employee and eluded to him being a nutcase. Senior officials in the Department of Justice have repeatedly implied Dodson is a liar. In an effort to silence him, Dodson was put under the control of ATF Public Affairs Chief Scott Thomasson, who made it clear in witness accounts he didn’t care if gunwalking allegations were true, he wanted to “f*&%” Dodson and other whistleblowers, regardless of the wrong doings of the bureau as a whole throughout the operation. After being put under internal investigation by ATF, Dodson was cleared of any wrongdoing earlier this year.

Mr. Dodson and other agents had their credibility attacked by their superiors. Dodson has requested the agency retract those statements that were clearly false about him.

Dodson was told that he would have to wait for the Inspector General’s report to be complete before the agency would even consider retracting false statements it made about him. That report was finally delivered in August 2013.

In September, Dodson also demanded that Fortune Magazine retract their smear attack against him. He wasn’t alone. The House Oversight Committee also called for a retraction.