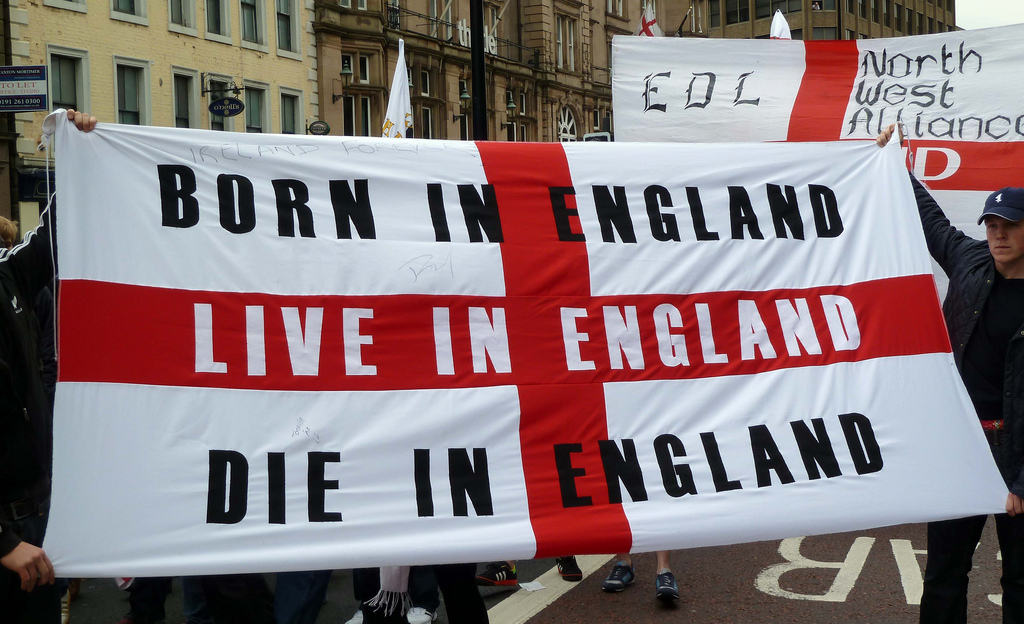 This is one of those times that I have an important story that many Americans will not understand or care about. A lot of people on this side of the Atlantic do not know who the English Defence League is, or simply do not care. But without a world view you can not look ahead. What is happening in Britain may as well be knocking on our door. Will we let it in?

A number of high profile figures have left the English Defence League citing that the organization has been taken over by far right factions including those who are anti-Semites, neo-Nazis and run of the mill racists. Frequent D.C. Clothesline contributor Pamela Geller is one of those who has broken ties and had this to say yesterday on her blog, Atlas Shrugs:

Tommy Robinson and Kevin Carroll are announcing their departure from the English Defence League. This move has come after many months of deliberation and many years of constant efforts by Robinson and Carroll to prevent the EDL from being infiltrated and co-opted by racists, anti-Semites, fascists, neo-Nazis, and far-right elements. Increasingly, Robinson’s time has been taking up with patrolling and policing EDL demos to keep out these infiltrators and far-right ideologues. He has decided, and my AFDI colleague Robert Spencer and I strongly endorse his decision, that his time is better spent working for the defense of England and human rights against Sharia and Islamization in different and more effective ways.

This has been a long time coming. Back on June 30, 2011, I wrote: that because of the “neo-fascists that had infiltrated the administration of the group,” I was “withdrawing my support from the EDL.” Tommy Robinson immediately issued a statement to SIOA, saying: “We repudiate any individual, group or writing that favors anti-Semitism, neofascism, and any race-based ideology. Any rogue elements within the EDL who go against our mission statement and our beliefs will be removed from the organization; we are determined to remain true to our mission. Anti-Semitism will not ever be tolerated within the EDL.”

These statements drew the ire of some counter-jihad bloggers who apparently didn’t mind the racists and anti-Semites within the EDL, and who addressed an Open Letter to me denouncing me for drawing back from the EDL. But a huge group of counter-jihad bloggers declared their support of our stand. When Robinson assured us that he was just as concerned about these elements as we were, and was working to root them out of the EDL, we continued to support the organization.

Now, over two years later, it is clear to all of us that the best way to proceed is to leave the EDL behind and move forward in new directions. This shows the utter mendacity and bankruptcy of the leftist and Islamic supremacist claim that our support of the EDL demonstrated that we ourselves were racists and fascists — as if that weren’t clear enough already. It also exposes the backstabbing and skullduggery of those in the counter-jihad movement who excoriated us for raising these entirely legitimate concerns. Our struggle in AFDI and SION, which continue to stand with Robinson and Carroll, is now and has always been for the freedom of speech, the freedom of conscience, and the equality of rights of all people before the law. We look forward to working with Robinson and Carroll in the future as we continue this great struggle for freedom.

I have no worries about Robert Spencer or Pamela Geller who have been fighting the good fight since long before I ever thought about Islam as a danger in our society. I do however have to question the motives of Robinson and Carroll.

Leaving the EDL is one thing but joining a Muslim run organization is certainly an interesting choice.

Yahoo News helped Tommy Robinson tell his side of the story:

Tommy Robinson has quit as leader of the English Defence League because he says he can no longer control extremists within the far-right group.

Mr Robinson, who set up the anti-Islamist group in 2009, said the EDL had become increasingly influenced by extreme elements that did not represent what he stood for.

“I apologise for the fact that what I’ve said has not resonated individually with Muslims,” he told journalists at a news conference.

“I don’t hate Muslims. Luton is a completely multicultural town and from day one we’ve wanted to embrace everyone; all colours and creeds.

Mr Robinson said he took time to evaluate his position after spending 18 weeks in solitary confinement, following a conviction for travelling on someone else’s passport.

“I thought about how I’d neglected my wife, my children and my family and I asked myself a lot of questions. I’ve got three young children. I want what’s best for them.”

He added that in order to solve what he sees as the problem of Islamist extremism in Britain, he needs to work with Muslims not against them.

“We had fought for three years to keep fascists and racists out of the EDL. When I attended our demonstration in Manchester I saw White Power flags that didn’t represent me.

“Am I willing to be the public face for them? No I’m not.

“I believe that the revolution needs to come from within the Islamic community and they need to stand up. And I believe this is a step forward not a step back.”

Here then lies the rub. The fact that Quilliam is run by Muslims is slightly disturbing. But it is the alleged ties that are very disturbing. I read the following at Bare Naked Islam:

[UPDATE] Apparently this is even worse than we thought. Quilliam is associated with the radical Muslim extremist group ‘Hizb ut Tahrir,’ which is like joining the political arm of al-Qaeda.

Wikipedia has this listing for Hizb ut Tahrir:

Hizb ut-Tahrir (Arabic: حزب التحرير‎ Ḥizb at-Taḥrīr; Party of Liberation) is an international pan-Islamic political organisation. They are commonly associated with the goal of all Muslim countries unifying as an Islamic state or caliphate ruled by Islamic law (sharia) and with a caliph head of state elected by Muslims.

Is there evidence that Quilliam and Hizb ut-Tahrir are actually tied together? It appears that there is. Wikipedia also reports, “Quilliam was established in 2007 by Ed Husain, Maajid Nawaz and Rashad Zaman Ali, three former members of the Islamist group Hizb ut-Tahrir.”

So let’s pause for a moment. Does one (or three) simply leave an Islamic supremacist group to become a kinder and gentler Muslim? Not likely. To me this seems like an attempt at mainstream infiltration more than anything. We see it happen in America with the Obama Administration so why not in the U.K.? Dirty politics are not exclusive to America.

Whether or not Tommy Robinson has gone from counter-jihad to pro-jihad is debatable but it certainly does not look good from the information I have before me.

It is very clear that the English Defence League sees him as a traitor. Here is a small excerpt from their statement yesterday:

When I woke up this morning, I never anticipated that today would witness the most extraordinary act of breathtaking betrayal and treason any of us may ever see in the patriotic movement.

Thousands of activists, years of hard work, hundreds of hours of media appearances, the courage, pain and suffering of legions of foot soldiers, the hopes and aspirations of tens of thousands of supporters and followers, would be sold down the river in a shocking act of betrayal in less than a few hours.

Today’s breaking news that Tommy Robinson and Kev Carroll are leaving the English Defence League and taking up new positions with a Muslim ‘anti-hate’ organisation, funded by the government and hard-line Islamic sources in the Middle East, has left the country’s patriotic, counter-jihad movement stunned with disbelief.

They are not throwing in the towel. That’s just where I decided to cut the quote. They will regroup and move forward.

From the outside looking in, this certainly does not look good. I had sent a Facebook friend request to Tommy Robinson some time ago. I checked tonight and he did not accept.

There are two sides to every story but it would appear very much like Tommy Robinson just sold the Brits out for his 30 pieces of silver. My hope is that he really is blind to the fact that he is working for an organization with terrorist roots.