Tuesday, Barack HUSSEIN Obama’s lips were moving and as usual more lies spewed forth during his blame game of a statement and Q&A session from the White House.

As expected, his words were NOTHING but a rehash of his favorite rhetoric…place blame on everyone but himself for the mess we’re in right now. And he did so by zeroing in that blame on Speaker of the House John Boehner, House Republicans, and of course the TEA Party…and you just know what’s coming next…it’s all Bush’s fault.

And by refusing to mention that he and his fellow Democratic cohorts are the true bearers of that blame because they have NOT allowed a budget to be approved and passed in years, Obama was able to spew out his words of blame and stack lie upon lie, while the leaning to left media that made up the bulk of the audience lapped up his every word. 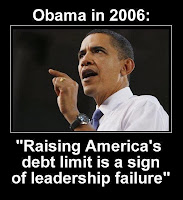 Blames and LIES…and the main lie was his vastly overstated comments about the danger our country faces if the debt ceiling is NOT raised before the October 17th ‘doomsday’ deadline. Saying NOT raising the debt ceiling will send our county into default is beyond a mere lie and crosses over into the absurd as we are in possession of over five and a half times the monies needed to meet the interest on our loans…and the paying of the interest alone keeps the country out of default…and as president Obama should know that. As he should also know that monies to do so come from the 2012 fiscal debt service to the tune of around $420 billion, and from the 2012 IRS revenues collected totaling around $2.3 trillion. So he either has NO clue whatsoever as to what default really is or he willingly choosing to twist its definition to suit his own nefarious purposes.

And while in Obama’s case it’s probably the later, rest assured there is NOTHING to fear from the word ‘default’ because it just will NOT happen. A true default is simply NOT paying interest due to US bondholders…as in the ones who finance our bills…and as I pointed out above we have more than enough monies on hand to cover those obligations.

So while Obama tried over and over to claim that the sky would fall if we could NOT meet our debts, adding that he cannot give priority to one bill due over the other, the fact is that having to prioritize bills in NO way means you would default on your debt as prioritizing is done within government entities every day…from the most mundane of issues to the most important of issues.

And even as Obama bloviated that he “is happy to sit down with Speaker Boehner and other Republicans anytime”…sit down and even go over ObamaCare line by line he said…he made it perfectly clear that negotiations with Republicans will only happen AFTER a vote is taken to lift the government shutdown by raising the debt ceiling so that we don’t have this country’s first time ever default. 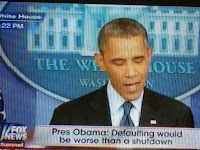 And having it happen on his watch are words his narcissistic self will NEVER say.

But…and this is basic politics 101…negotiations are done BEFORE anything is voted on because the simple fact is that there NEVER will be negotiations after a vote is taken.

And with that, Obama’s words that he ‘won’t let extortion become routine’…he’s once again made it clear that he’s only willing to negotiate as long as he gets everything he wants first, even as he called on Congress to work with him and that all sides should show some “civility, common sense, and give-and-take.” Yet over and over in words he either said outright or alluded to is the fact that he will NOT give in on his refusal to negotiate policy issues or will he negotiate on a short-term resolution to reopen the government.

“I’m not going to do it until the more extreme parts of the Republican Party stop forcing John Boehner to issues threats about our economy,” Obama said.

Guess what…those are NOT words conducive to negotiation…those are words that echo the classic definition of extortion…give me what I want or else I’ll give you NOTHING.

I will NOT do this…I won’t do that…a temper tantrum right before the cameras that those on the left will still refuse to see.

And so the blame game continued as Obama basically called Speaker  Boehner a liar because Boehner claims…and rightly so…that there aren’t enough votes in the House to pass a clean continuing resolution to fund the government.

“Put in on the floor and see what happens,” Obama croaked as his once again infamous smirk crossed his lips.

And herein lies the sum total of all the problems…problems of Obama’s and the Democrats doing…as a clean continuing resolution would NOT link funding the government to funding ObamaCare, and thus would allow ObamaCare to be funded as is, case closed. Boehner knows this and as of now he…in his capacity as Speaker of the House…is standing strong against what Obama wants…standing strong as he should.

In his rebuttal to Obama’s bloviations, Boehner actually showed some backbone when he said, “What the president said today was, if there’s unconditional surrender by Republicans, he’ll sit down and talk with us. That’s not the way our government works.”

But sadly, unless ALL House Republicans stand strong…and I do mean ALL…that will be exactly how our government will work as long as Barack HUSSEIN Obama is at the helm of our country.