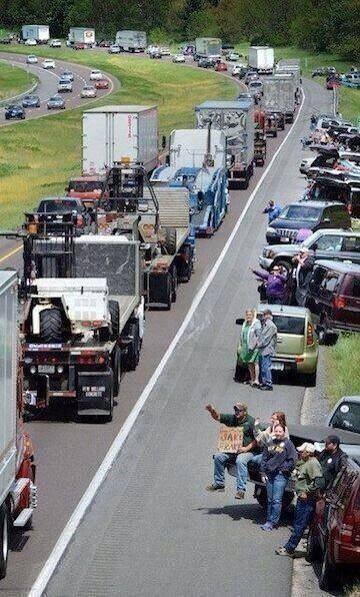 Today is the big day as a second round of thunder rolls into our nation’s capitol.

If you believe in any kind of higher power then you might also believe in a lower power. Chaos is a product of evil and if you see lots of chaos it is probably a good sign that you are doing something right. I sat down to write a “feel good” motivational article about the “Ride for the Constitution” and I ran into a little bit of that chaos today.

There are reports that national guard units are moving in to secure I-495 to thwart the trucker’s Ride for the Constitution protests. I also just checked the official website 5 minutes ago (1 AM Friday Morning) and it has apparently been taken down. www.ridefortheconstitution.org is coming up with Blue Host information for people who might want to start their own website. When my site goes down people get error messages and not advertisements. Who knows?

It would not be a surprise if it is dirty politics considering that Facebook and Twitter have both shut down the organization’s accounts in the weeks leading up to the event. But the truckers keep bouncing back and showing the resolve that is common to a special breed of people that we call Americans. As I write this article we have a couple of discussions going on The D.C. Clothesline Facebook page. If you see nothing below it is because those status updates have been purged by Facebook.

This is insane. Earlier we posted a picture on Facebook with people on the side of the road cheering on the truckers….

The discussions were about why the Ride for the Constitution site may be down and why a photo I shared earlier was removed from my Facebook page, my timeline and the timelines of many other people. It is the picture to the right. I found someone who has it and downloaded it to my hard drive. I am sure Facebook and Blue Host will have “logical” explanations but it certainly smells like dirty politics from this perspective. As for the picture, I was told by a reader that this was not taken yesterday but was from a prior event. But the picture is not captioned, so why would Facebook remove it on those grounds? Why would they remove it at all? Are you offended by this picture? It fires me up!

At any rate, we move forward… Will the National Guard really be waiting to stop the truckers? One of the sites that was being credited as a source was Red State. It was not a Red State article but a “user diary” that made this claim. I have no idea if it is true or not but I will share what Red State Editor Erick Erickson wrote as an update to that user diary:

These are the sorts of user diaries that make me wonder why we have user diaries as all our credibility suffers. Please use your user diary responsibly. — Erick

We will find out today if Glenn Ryt really received that information from a credible source. If we see National Guard troops stand against these truckers then I would think America needs to have an honest discussion about the troops who would follow those orders. My gut feeling is that this report was totally false but you never know. We shall find out.

All of the above does not matter to me in the least. Even if there is a force waiting to stop these truckers, and this “Ride for the Constitution” doesn’t happen, it does not matter.

Why would I say that?

Because if they stop these truckers it just strengthens America’s resolve and we will be back with larger numbers. This is nothing more than a peaceful protest. U.S. News and World Report has put false spins on this story twice now. The first time they interviewed someone who was not qualified to speak for the event and he talked about making arrests and blocking traffic. This was false. Then they came back with an article that noted that the truckers had changed their minds about making arrests. Again this was false because the whole story came from one person with his own opinion and this opinion was not a reflection of the organizers’ plans.

Nelson reported yesterday that the truckers plan to “arrest” congressmen and slow down traffic for their pilgrimage to D.C. taking place on October 11-13. Earl isjustifiably outraged about the elected officials’ disregard for the Constitution, but he not reflect the group’s mission.

In an email to Nelson posted on the trucker’s official website yesterday, Santilli said in part,

“We hereby respectfully request a retraction or update on the article to indicate that Earl is in no way associated with the mission of the ride. He was merely a point of contact for drivers at a meeting place for the start of the convoy. Please immediately update the article so as not to create the false perception you have portrayed in your article.”

Despite the strongly worded email, Nelson used Conlon as a source again in a new article today titled, “Truckers Change Mind, Won’t ‘Arrest’ Congressmen.” This title is inaccurate, as the “Truckers Ride for the Constitution” never intended on “arresting” anybody.

The shocking thing about Nelson’s article is that even after the organizers clarified on Facebook, and on their official website, and in an exclusive interview with the Examiner, as well as in a personal email to Nelson, his article from today continues to use quotes by Conlon.

“News coverage of a trucker protest seeking to clog the roads in and around Washington, D.C., this weekend prompted a schism between the ride’s leaders.”

But there is no “schism.” There never was.

Did you catch all of that? Me neither. None of this stuff really matters.

I had a business mentor who told me something that has always stuck with me. He said, “Dean, dogs don’t bark at parked cars.”

Whenever you see these social networks and journalists making an all out desperate attempt to hurt the image of what is going to happen today, it is a sure fire sign that this ride is a good thing.

Only those that are there will be able to tell us what really goes on. We can’t trust the media who under reported the numbers from the bikers that rolled into D.C. last month.

Some major names in the trucking industry have come out against this ride. Of course they have. Drivers are costing them money this weekend. These are big businesses and like most big businesses, they have ties to big government.

So today we will see that all of the above is just more fuel for a fire and simply can not be extinguished.

Just as with the sea of bikers that rolled into D.C. last month, thunder will be heard again TODAY in our nation’s capitol.

One thing we know about thunder is this… When you hear it you might want to take cover because a storm is coming and it can not be stopped.

The hopes of a nation ride with you.

UPDATE… 6AM…  www.ridefortheconstitution.org is now redirecting to the organization’s Facebook page.

UPDATE… 2:20PM… If you clear your cache, cookies and browsing data the site is back with a new server and they are running live updates through the Pete Santilli show. If you still get the Facebook page through the above link, try clearing your cache and cookies.