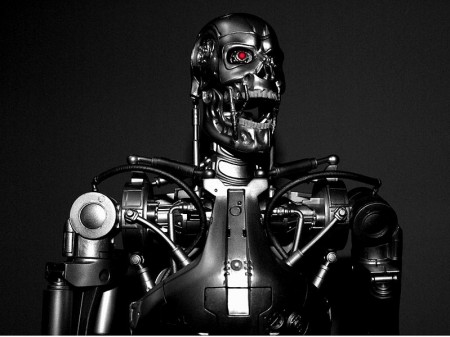 The wars of the future are very likely going to resemble many of the science fiction movies that we are watching right now.   The U.S. military is in a global race to create the “technologies of the future”, and some of the things that they are coming up with are disturbing to say the least.  Are you ready for future conflicts where “Iron Men”, “super soldiers”, “Terminator robots”, and autonomous drones do most of the killing?  Are you ready for American soldiers that have been genetically modified to perform superhuman feats of strength, run at superhuman speeds and even regrow limbs?  The truth is that all of this stuff is being developed right now and most Americans have no idea that it is happening.

Have you enjoyed watching the “Iron Man” movies that have come out in recent years?  Tens of millions of Americans have flocked to see those films, and now they are being used as inspiration to create a new generation of “exoskeletons” for U.S. soldiers.  In fact, it is being reported that this revolutionary new “smart armor” was specifically “inspired by Tony Stark’s legendary nano suit used in the Iron Man movie series“.  This armor is currently being developed at MIT, and according to the BBC this armor will give U.S. troops “superhuman strength”…

The US Army is working to develop “revolutionary” smart armour that would give its troops “superhuman strength”.

It is calling on the technology industry, government labs and academia to help build the Iron Man-style suit.

Other exoskeletons that allow soldiers to carry large loads much further have already been tested by the army.

The Tactical Assault Light Operator Suit (Talos) would have such a frame but would also have layers of smart materials fitted with sensors.

The suit would also need to have wide-area networking and a wearable computer similar to Google Glass, the US Army said.

Most people would not object to high tech armor for the military, but what about genetically modifying soldiers themselves?

That is an entirely different thing altogether.

In a previous article, I included a quote from a Daily Mail article that discussed how DARPA is now working on ways to create “super soldiers” that will be able to run at Olympic speeds and regrow limbs that have been blown off…

Tomorrow’s soldiers could be able to run at Olympic speeds and will be able to go for days without food or sleep, if new research into gene manipulation is successful.

According to the U.S. Army’s plans for the future, their soldiers will be able to carry huge weights, live off their fat stores for extended periods and even regrow limbs blown apart by bombs.

The plans were revealed by novelist Simon Conway, who was granted behind-the-scenes access to the Pentagon’s high-tech Defence Advanced Research Projects Agency.

How in the world could those things possibly be accomplished?

Through genetic modification of course.

A different Daily Mail article explained how this might work…

But should we really be using viruses to modify the DNA of our soldiers?

Should we really be modifying the DNA of anyone?

This is very dangerous territory.  Just because we now have the ability to “play God” and alter human DNA does not mean that we should.  If our scientists are not careful, they could end up creating monsters far beyond what anyone could imagine right now.  And once Pandora’s Box is opened and these super soldiers start spreading their DNA around, it simply will not be possible to put the genie back into the bottle.

Another area where the U.S. military is pushing boundaries is in the field of robotics.  For example, Northrop Grumman has developed a 1 1/2-ton unmanned killing machine that is known as MADSS…

The MADSS is one mean robot. Developed by defense industry leader Northrop Grumman and currently being showcased at the Fort Benning, Ga. “Robotics Rodeo,” the MADSS is a 1 1/2-ton unmanned ground vehicle designed to provide soldiers with covering fire while cutting down targets.

Make no mistake, it’s an automatic shooting machine, But it requires people to operate it and set targets. The MADSS — Mobile Armed Dismount Support System — tracks and fires on targets only once it gets the green light. It won’t shoot unless a soldier is directing it.

It’s half killer robot, half killer giant remote-control car. While its top speed hasn’t been stated, Northrop Grumman has said that it can follow troops on foot at about five miles an hour over rough terrain that conventional combat vehicles would find impassable.

But a remote control vehicle is one thing.

A “Terminator-like Atlas robot” is another.

Right now, Boston Dynamics is working on a 330 pound humanoid robot that looks like something out of a bad science fiction movie…

Finally, there’s fresh footage of Boston Dynamics’ Terminator-like Atlas robot, which was unveiled earlier this year. The 6-foot, 330-pound humanoid, which may or may not be a future robot infantryman, is designed to use tools and walk over rough terrain.

Check it out stomping over several boxes of rocks like nobody’s business, and then standing on one foot while being hit with a swinging weight.

Of course, it laughs on the inside at these pathetic human challenges.

You can view Atlas in action right here…

And personally, I think that the very human-looking robot known as “Petman” is even creepier.

You can see “Petman” in action right here…

As long as humans are controlling this kind of technology, at least there are some safety checks.

But what if we started creating killing machines that made their own decisions?

That sounds crazy, but according to a recent National Journal article that is exactly what is being developed.  As you read this, scientists are working on ways to enable drones “to make even lethal decisions autonomously”…

Scientists, engineers and policymakers are all figuring out ways drones can be used better and more smartly, more precise and less damaging to civilians, with longer range and better staying power. One method under development is by increasing autonomy on the drone itself.

Eventually, drones may have the technical ability to make even lethal decisions autonomously: to respond to a programmed set of inputs, select a target and fire their weapons without a human reviewing or checking the result. Yet the idea of the U.S. military deploying a lethal autonomous robot, or LAR, is sparking controversy. Though autonomy might address some of the current downsides of how drones are used, they introduce new downsides policymakers are only just learning to grapple with.

The basic conceit behind a LAR is that it can outperform and outthink a human operator. “If a drone’s system is sophisticated enough, it could be less emotional, more selective and able to provide force in a way that achieves a tactical objective with the least harm,” said Purdue University Professor Samuel Liles. “A lethal autonomous robot can aim better, target better, select better, and in general be a better asset with the linked ISR [intelligence, surveillance, and reconnaissance] packages it can run.”

Would you be comfortable with unmanned drones flying over your neighborhood that are able to decide on their own whether to kill you or not?

I certainly would not be.

This kind of reminds me of the killer drones in the new movie “Oblivion” that Tom Cruise starred in.  I certainly would never want such technology being used to patrol the streets of America.

And what if we lose control over this kind of technology once it becomes widespread someday?

In the past, such notions where laughable.  They were used as plots for bad science fiction movies and that was about it.

But now we are moving into a time when science fiction is becoming science reality.

Are you ready for that?

Not The Onion: TSA Accepts Arrest Warrants As Proof Of ID For Illegal Aliens Boarding US Flights
January 22nd, 2022 Sons of Liberty Media