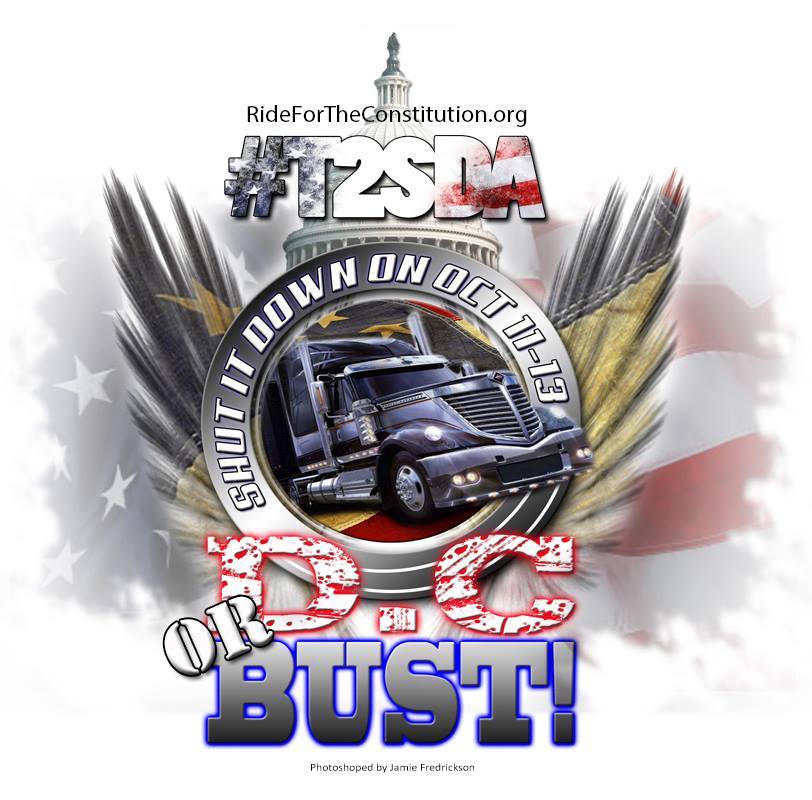 I’m trying to figure out what to write about this morning and I had a bit of an epiphany. My unhealthy man crush on Steve Stockman is waning. Ted Cruz and Rand Paul no longer excite me as much as they once did. We won’t even start on the bad guys. These are the good guys.

So I did a little soul searching and I figured out why I am starting to become disheartened with ALL of them. We have this wonderful exhibition of American Patriotism going on this weekend with the Truckers, and the Veterans on Sunday, but where are our supporters from D.C.? Really, where are they?

The truckers who are either already in D.C. or en route are putting a lot on the line to be there. They are jeopardizing their jobs and missing out on income. We did some math at The D.C. Clothesline Friday Night and determined that many of these truckers are spending $1500 or more out of their own pockets just to stand for you and I.

Something to consider. The current average fuel price for diesel in America is $3.90 according to a site I just looked…

By the way I just noticed the typos and I was obviously talking about mpg and not mph. I don’t tend to proofread my Facebook posts. I just rant. 🙂

My math may not be perfect but it really blew me away when I did those calculations.

That my friends is a commitment.

These truckers and the vets seem to be standing for all of the things that our favorite elected servants talk about, so where are they?

Issues like Obamacare, smaller government and the NDAA are popular with most of the politicians that we put on pedestals but they don’t seem to care when we attempt to make a stand.

Have you, or maybe someone you have known, ever experienced the disappointment of a parent who doesn’t get involved in your life? That is what this reminds me of. To me a guy who risks his job and takes $1500, that he can’t afford, out of savings to stand for America is much more of a hero than a guy who talks for 21 hours straight. Anyone who has ever been the parent of a newborn will understand that 21 hours is an average day and you know what it’s like to do it 7 days a week.

This is the problem with our elected officials. They are not willing to get involved with the people they represent. They look at us as though we are fish in an aquarium. Ted Cruz pointed this out on Twitter recently.

The fundamental problem in Washington is Washington is not listening to America #MakeDCListen #DefundObamacare #VVS13 http://t.co/Mk9z0AvHZ0

Amen Senator Cruz. So might I ask you? Why have you not said a word about the truckers that are risking their livelihoods this weekend? Why have you not pointed out the heroics of them taking a stand against government corruption?

Many of these same men and women were glued to their televisions while they watched your epic 21 hour “filibuster” but you can’t give them an “attaboy?”

America needs those who are willing to roll up their sleeves and get in the trenches. We are sick of those who tell us what we want to hear and look down on us. If the election were held today and Ted Cruz was on the ballot I would vote for him, but it’s not because I don’t long for something better.

America needs more than someone who grandstands in order to try to win our hearts. We need someone that acts like they care about what we are doing.

Congress is a massive failure. So how is it that when Americans start trying to take matters into their own hands we can not even get an acknowledgement from our elected servants?

These people work for us.

I understand this post will make some people angry but I had to get this off my chest. Even the good guys in D.C. don’t impress me that much. They are great promoters of themselves, but at a time when the American people chose to stand up and make a statement, they didn’t bother trying to promote what we cared about.

I remember these things just like I remember votes against The Constitution.

Give me a person who is not afraid to get egg on their face and will actually interact with the American people and I will kill myself to try to get them elected. But as of right now I can’t see myself making a strong endorsement for anyone in 2016.

That’s just how I feel. Stop telling me what I want to hear and start acting like you respect the things that regular Americans are trying to do to save this country.

A simple “#T2SDA” on a tweet would do wonders for the morale of your constituents. People really don’t care what you know until they know how much you care.

Does Ted Cruz care? I think he does. But I think he and 534 other people could do a much better job of relating to real Americans and supporting our interests. I’d love to see one of our Senators throw on a pair of jeans and ride shotgun in one of those trucks. That would mean something to me.

Wouldn’t you get fired up to see Mike Lee riding shotgun with some 350 lb. behemoth who has tattoos from head to toe? Some people might call someone like that a freak show but Patriots come in all shapes, colors, sizes and even have some really interesting body art. Being a Patriot has nothing to do with your look. It is what is in your heart.

So come on Washington.

We are begging you to show us some heart.

I suppose that most politicians only support their own ideas and don’t think that regular people have much to contribute.

Actions speak louder than words. If they cared, they would be involved.

I picked on Ted because he is one of my favorites. Once again, you don’t want me to work my way down the list.

Roll on Truckers. The media may not support you and the politicians act like you don’t exist but there are millions behind you. You are heroes in my book.

UPDATE: 9 PM SATURDAY… Texas Representative (1st District) Louie Gohmert took the time to speak to the truckers in D.C. and spend lunch with them today. Hats off to Mr. Gohmert. This is what I want to see. Give me something to believe in.