Another legacy of the Obama administration: the nuclear race among Islamic nations in the Middle East. Generations to come will remember well Obama’s contribution to their safety and security when they are held hostage by nuclear Islamic regimes whose objective is to install the universal caliphate living under the sharia.

Obama is making an enemy of Egypt, a once reliable ally. This week he suspended hundred of millions in military and other aid to punish the people of Egypt for throwing off the yoke of Islamic tyranny by the Muslim Brotherhood.

Egypt recently announced the renewal of its plan to establish a nuclear power plant. This intention was expressed in statements made by the Egyptian minister of electricity and energy in mid-September 2013 during meetings he held with International Atomic Energy Agency (IAEA) officials, and in a speech given by Egyptian President ‘Adly Mansour on the 40th anniversary of the 1973 war last week.

The Egyptian nuclear program began in the 1950s with the intent to establish a nuclear power plant in a dedicated site in the city of Al-Dab’a in the Matrouh governorate in Northwest Egypt, on the shore of the Mediterranean. This plan was suspended in 1986 following the Chernobyl disaster, but was revived in the early 21st century under President Hosni Mubarak, possibly due to the leniency of the U.S. and the West towards the nuclear programs of India, Pakistan, and North Korea, as well as the perception that a nuclear program would help strengthen Egypt’s position as a regional power. Under Mubarak, the project ran into difficulties, and after his regime was ousted in February 2011 it was halted completely. After the anti-Mubarak revolution, the residents of Al-Dab’a, who had objected for years to the establishment of a nuclear site in the city – citing health and safety concerns, and claiming that they had rights to the land – invaded the site and wreaked havoc there.

During his brief term in office, ousted president Muhammad Mursi also considered the possibility of renewing the nuclear project. While on a visit Russia in April 2013, Mursi called on Russia to develop Egypt’s peaceful nuclear program and to construct nuclear power plants in the country.  However, no significant developments occurred during Mursi’s term, and the residents of Al-Dab’a continued to object to the project.

According to reports in the last two weeks, the Egyptian army has reached an understanding with the Al-Dab’a residents on restoring its control over the site, which enables the project to move forward. It seems that the renewal of the nuclear project is motivated by the current regime’s desire to win internal legitimacy and portray itself as being able to restore Egypt’s status as a regional power.

It should be mentioned that Egypt is a signatory to the Nuclear Nonproliferation Treaty (NPT) since 1981 and has made efforts in international circles to disarm the Middle East, and especially Israel, of weapons of mass destruction. Egypt repeatedly stresses that its nuclear program is for civilian purposes and is meant to meet its energy needs, and that it would operate in full coordination with the IAEA. However, Egypt’s decision to renew its nuclear program may also be a signal from it and its gulf allies to the U.S., in light of the recent signs of an Iran-U.S. rapprochement and the possibility that the U.S will recognize a nuclear Iran.  Accordingly, there have been increased fears of a possible nuclear arms race in the Middle East.

It should also be mentioned that, alongside Egypt’s declaration of the renewal of its nuclear program, and, on the other hand, the beginning of the disarmament of Syria’s nuclear weapons arsenal, official Egyptian media published several articles calling on Arab countries to preserve their weapons of mass destruction as a deterrent.

This report will review the recent developments in the Egyptian nuclear program.

As stated, the issue of renewing the Egyptian nuclear program was raised in mid-September 2013. Egyptian Electricity and Energy Minister Ahmad Imam discuss the Egyptian nuclear program with IAEA officials on the margins of the IAEA conference in Vienna, adding that its execution depends on the approval of the Egyptian parliament, which is to be elected in a few months’ time after a new constitution is approved. Imam stressed that the program would be conducted in full coordination with the IAEA.

Some three weeks later, in a speech commemorating the 40th anniversary of the 1973 war, Egyptian President ‘Adly Mansour officially announced the renewal of the nuclear project in Al-Dab’a and the commencement of the first steps towards establishing peaceful nuclear power plants. He said: “In light of the challenges we face in the field of energy, I declare the start of a project to establish peaceful nuclear power plants. Al-Dab’a will be the first site to be examined. This is a national project that, over the coming decades, will help meet one of the most important development demands for the next generations – a demand [whose fulfillment] Egypt yearns for and deserves. In this context, let me praise the patriotic [commitment] of the Egyptian [citizens] in Al-Dab’a towards realizing this promising project.”

President Mansour’s science advisor, ‘Essam Heggy, also stressed the importance of renewing the Egyptian nuclear program. In an interview with the daily Al-Masri Al-Yawm, which was published the day after Mansour’s speech, he said: “Being that 90% of Egyptian energy relies on fossil fuels, there is no alternative but to renew the Egyptian nuclear energy program so that nuclear energy will become the primary source of energy and electricity[-production] in Egypt.”

After President Mansour’s declaration of the re-launching of the nuclear program, reports indicated that a series of meetings had been held at the ministry of electricity and energy, attended by the heads of Egypt’s three bodies in charge of nuclear energy – The Nuclear Power Plant Authority (NPPA), the Nuclear Materials Authority and the Atomc Energy Authority – in order to jump-start the program and lay down the necessary infrastructure for it. Among other things, they discussed the transfer of the Al-Dab’a site to the responsibility of the NPPA, and the question of whether to accept public bids for the project from around the world or assign it in advance to a specific company. 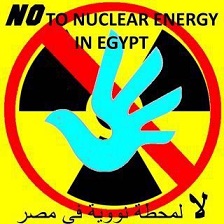 After the January 25, 2011 revolution, the residents of Al-Dab’a took over the site intended for the nuclear power plant and damaged it, while demanding compensation for damages they claim to have suffered as a result of the project and presenting this as a condition for handing the site over to authorities. 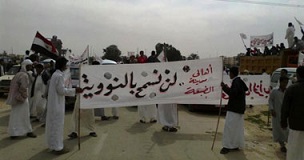 Al-Dab’a residents protest in January 2013: “No to nuclear power”

However, September 2013 saw a significant development: after two weeks of negotiations the residents of Al-Dab’a reached an agreement with the army and handed over control of the site. The sides agreed that, upon the approval of the nuclear program by the future parliament, which is to be elected in a few months after the approval of a new constitution, the residents harmed by the project would be compensated, and all lawsuits and legal proceedings against residents who invaded the site would be dropped. This development was presumably one of the factors that enabled the declaration of the renewal of the nuclear program.