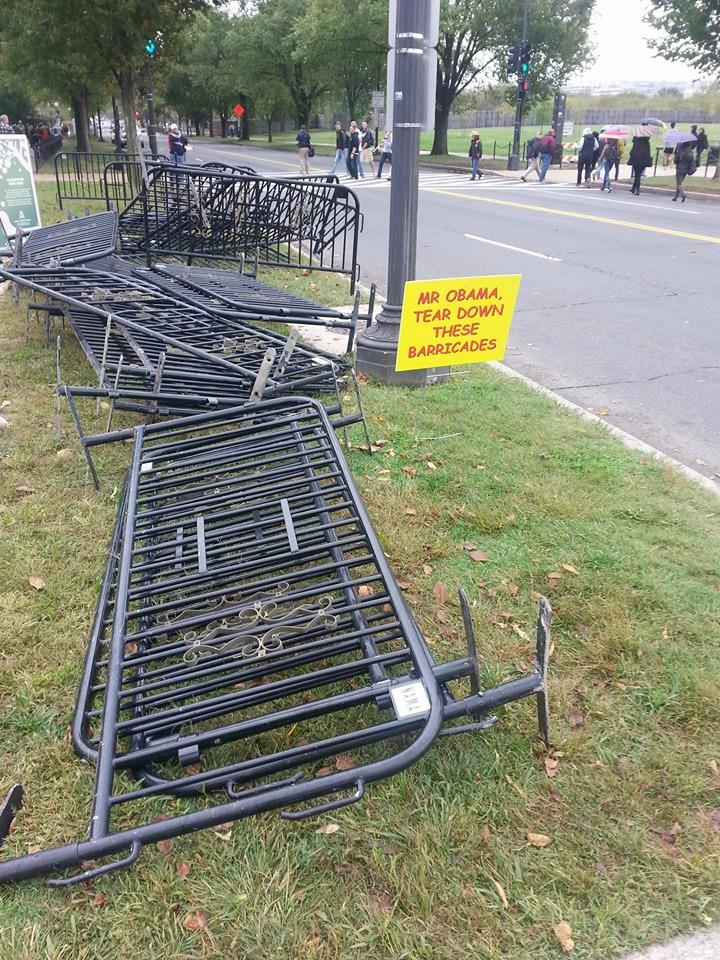 There’s a classic childhood tale of “leverage” known to all parents and kids alike as “The Three Little Pigs.” Early in the battle the wolf has leverage and he successfully blows down a straw house and a house made of twigs. But in the end the pigs gain leverage by retreating to their brick house and the wolf can’t touch them. The wolf is dejected and soon gives up. Think about that silly story as I talk to you today.

A few things I say might hit a nerve and you might be angry with me. Just please remember that in the end I am on your side.

I’ve had enough. We all have. Less than 24 hours after a large group of peaceful protesters removed the barricades and neatly stacked them in front of the White House, they were put back by National Park Service workers. This is not how it works. Evidently at some point in time Barry Soetoro, a.k.a. Barack Obama, has forgotten how this whole system is set up. He works for us.

Larry Klayman will be leading a group to D.C. on November 19th and I am going to see if can figure out a way to go. I haven’t been able to verify this officially but I have heard some rumors that the truckers may be returning that same weekend. I admire Larry Klayman very much, in fact he fired me up this weekend when he made the comment about Obama putting his Quran down and coming outside with his hands up.

That was classic. And I love what all of the vets and truckers did this weekend. It took some real guts to do what they did, but the American people need to have a serious talk.

Are we going to keep knocking down dominoes and making Obama’s henchmen pick them up? Is that how this is going to work?

OK, well let me tell you something. Ghandi and Lek Walensa would have been dead if they pulled that peaceful revolution stuff on a group of jihadists. I can’t believe for a minute that a President who has been labeled as a member of the Muslim Brotherhood is going to respect that. Has anyone been paying attention to what is happening with Muslims worldwide? They don’t respond to peaceful people. They kill them.

They cut their heads off to be more specific. You do not negotiate peacefully with Islam. I’m sorry but you don’t. I have seen no evidence that it works and I am not about holding hands and singing Kumbaya to try to gain what the American people want.

So, again, do you want to keep knocking down the dominoes and watch the government pick them back up?

Now, please do not take this rant the wrong way because I have much respect for my fellow Patriots and I will not ever attempt to disrespect a veteran. That is a line I do not cross. I believe their heart is in the right place but let me put myself in Obama’s shoes and play a little devil’s advocate.

What leverage do these vets have? What are they going to do to effect Barack Obama in the least? How can they force congress to end the shutdown? Barry will sit in the comfort of his secure location, as will key members of congress, just like the little pigs in their brick house, and probably not worry about much other than political spins. Obama might come out and make a statement later in the day about how the republicans are dishonoring the veterans who are demanding an end to the shutdown, but he doesn’t feel threatened in the least and we need to understand that. The congressional leaders feel a bit more pressure because many are up for re-election but I don’t think this protest will do a lot to hasten congress.

Throwing the barricades in front of the White House made a lot of people proud but it’s not like Obama had to come out in his boxers and clean it up. The president is insulated. Congress is insulated. We can yell at all of them to put down their Qurans and come out with their hands up, or else... but…

We can demand a government shut down be ended, or else…

America, I am calling for nothing today but I do know what works in negotiations. What will work is gaining leverage. The first rule of negotiations is that you have to be able to hurt the guy across the table if he does not choose to meet your demands. That is how it’s done.

Peaceful can be done in theory but not if we keep showing up and begging them to do the right thing. You have to be able to deliver real and lasting consequences if they do not.

Now we have to understand that we can’t hurt Obama when ballots are cast and he knows that. That may be a good thing for us because with all of the voter fraud going on in this country he’d probably not take that seriously either. Elections are shaky ground at best.

So how else can you hurt a man who is so well insulated? Without going to the obvious we only have things like impeachment. Do you really believe that the republicans are going to seek impeachment after 2014 elections? I am not sure I do. But even if they are sincere in those intentions, they still have to gain the majority. Are you absolutely certain that will happen? And even if you are, are you sure that you can count on fair elections? Look at what happened in Minnesota with Al Franken. If the democrats need 1 or 2 seats to swing or stalemate a majority do you really doubt that it could happen again?

America, I may very well be one of those people who stand with Larry Klayman on November 19th and yell at the top of my lungs. “Come out with your hands up or else…”

I might feel really good about myself and my chest may swell up with pride, just like it did Sunday to see so many Patriotic Americans answering the call. But come Monday it doesn’t take long for it all to come crashing down. We found that out this week. We learned a lesson but will we apply what we have learned?

What I am telling you is that at some point in time we have to be willing to go there.

Egypt went there and they succeeded. But they didn’t get anywhere by asking Morsi to step down. They had to forcibly remove him.

Do you understand what I am saying?

Dictators do not step down voluntarily.

Dictators are not impeached.

If you have any doubt that Obama and his congressional lapdogs consider him to be a dictator just look at their actions.

Actions speak much louder than words.

I am with you and whether I get to actually go to D.C. this time or end up following from the sidelines, I will support my Patriotic brothers and sisters.

But at some point we might have to think about escalating and putting more pressure on. I am not saying that we have to immediately reach for our guns if a protest fails to incite change, but I will say this…

If you aren’t eventually willing to go there then we are already destined for failure.

Unless a government truly fears us and feels that we have some kind of leverage then they have no reason to accept our demands.

We aren’t really demanding anything to be honest. At this point we are begging.

When we start raising the stakes and letting them know that we can and will remove them with force they will begin to take us a lot more seriously.

In other words, our “or else” statements can’t be followed by nothing but air. We have to find a way to raise the stakes on November 19th so they take us more seriously than before. I’m not talking about guns, at least not yet. That may have to happen in the future but hopefully not.

For starters, if we can’t double or triple our numbers from the last time then we don’t deserve a positive outcome. The truckers have a great concept but if people are going to sit home and spend money it won’t work. If we don’t get more trucks to shut down or attend it won’t work. We need numbers. We must appear stronger and more united and we must make them start to think. We have to make them believe that things could be headed south for them if they do not comply and we must be prepared to back it up.

I will never likely be that guy that calls for a violent revolt. I am not military. I don’t have a large cache of weapons. I know nothing about strategy or logistics. I am not a leader in that regard. I am a follower.

But if someone calls for it I will be there and the most important decision you can make is if you are willing to go there yourself if and when the time comes.

Do you want to win or are you satisfied with being an occasional weekend warrior that protests for entertainment purposes only?

This is our country and these people work for us. But, just so you know… Most of them are laughing at us at this point. Most of them think we are few and we are crazy. They don’t think we will ever “go Egypt” and if we are not willing to eventually go there then all of our threats are empty.

Don’t think for a minute that they do not know that.

Organizers, if any of you are reading this, please… Start thinking about gaining leverage. Leverage always wins in negotiations. To win a negotiation you have to make the other guy suffer loss if he does not accept. That’s how it works in business and that’s how it works in war. Leaders surrender because they can not accept any more losses. If we gain leverage then we will win.

They won’t even pay attention to us until they start to feel some kind of real loss whether it be money, reputation or something much more.

Again, I am with you. I am here to serve my brothers and sisters. We can do this peaceful thing for as long as everyone wants and I will continue to do everything I can to raise awareness and keep people informed.

For now we have a good thing going. We are causing people to wake up and as long as we can increase our numbers we are doing it right. However, there will come a time when people want results and if peaceful protests do not gain those results, which is very possible, then we must be prepared to take it to the next level.

Just please tell me when it’s time to start shooting. 🙂