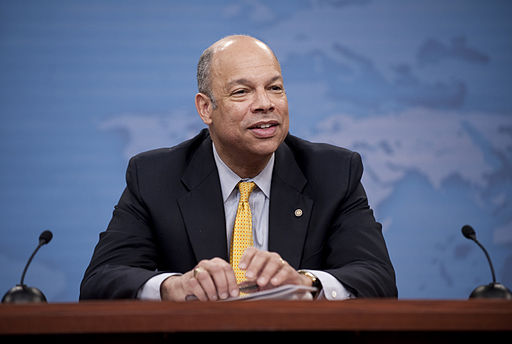 Following the departure of former Homeland Security Secretary Janet Napolitano to take over her duties as the president of the University of California, Barack Obama has nominated a major donor to his campaign (can you say ‘quid pro quo’?) Jeh Johnson to succeed her. Many breathed a sigh of relief that it wasn’t Sheila Jackson Lee. However, there have been many who have expressed concern over the nomination of Johnson by Obama in his announcement on Friday afternoon.

Federal campaign finance records show that over the past decade, Johnson has contributed more than $100,000 to Democratic candidates and groups.

He was also a supporter of Hillary Clinton, having contributed $2,300 to her presidential primary campaign in July 2008.

The list of recipients of Johnson’s largesse reads like a who’s who of Congress — Sen. Chuck Schumer, D-N.Y.; Sen. Dick Durbin, D-Ill.; Rep. James Clyburn, D-S.C.; among others.

“I love this country, I care about the safety of our people, I believe in public service and I remain loyal to you Mr. President,” Jeh Johnson said at the White House Rose Garden announcement Friday.

Johnson, a former general counsel for the Defense Department, aided in the changing of the policy on military commissions at Guantanamo Bay. He also pushed for abandoning “Don’t ask, don’t tell,” which allowed for practicing homosexuals to serve openly in the military, an action that would have gotten them drummed out in humiliation from our very first Commander-in-chief.

Fred Lucas points out one of the most disturbing aspects of Jeh Johnson. He writes:

During a March speech at Fordham University, months after leaving the Defense Department post, he supported the use of drones and dismissed the notion of a “drone court” to provide additional oversight for strikes. Advocates for such a court said the court would be similar to the FISA court.

“In my view targeted lethal force is at its least controversial when it is on its strongest, most traditional legal foundation,” Johnson said. “The essential mission of the U.S. military is to capture or kill an enemy. Armies have been doing this for thousands of years. As part of a congressionally-authorized armed conflict, the foundation is even stronger.”

He said that FISA oversight is an extension of Fourth Amendment protections, which is not applicable in war.

“The idea of judicial authorization of lethal force against an enemy combatant, particularly during armed conflict, has no similar roots in an activity typically performed by the judiciary,” Johnson said. “To the contrary, the idea is motivated by a desire to rein in the president’s constitutional authority to engage in armed conflict and protect the nation, which is the very reason it has constitutional problems.”

“It would appear that the president plans to nominate a loyalist and fundraiser to this post,” Sen. Jeff Sessions, (R-AL), senior member of the Senate Judiciary Committee, said in a statement. “This is deeply concerning. This huge department must have a proven manager with strong relevant law enforcement experience, recognized independence and integrity, who can restore this department to its full capability.”

Sessions said that DHS “is the most mismanaged department in the federal government. Department policies have collapsed enforcement and destroyed the morale of our officers. Immigration officers have been forced not to perform their duties. ICE officers even filed a federal lawsuit against DHS in an effort to regain their ability to enforce the law. It would appear that the President plans to nominate a loyalist and fundraiser to this post.”

According to Sessions, Mr. Johnson will have to demonstrate the following to the Senate:

Sessions was not the only Senator to express concern.

Texas Senator John Cornyn (R) bashed Johnson as someone who does not have the experience to secure the border and claimed that the nomination was nothing more than payback for his campaign contributions.

“Rather than selecting someone who knows the unique dynamics of our Southern border, the President has tapped one of his former New York fundraisers,” Cornyn said.

He then added “After this administration’s mismanagement of DHS, in particular its failure to secure the border, Texans expect a nominee with serious management and law enforcement experience.”

The nomination comes as Obama is set to push once again for immigration reform.