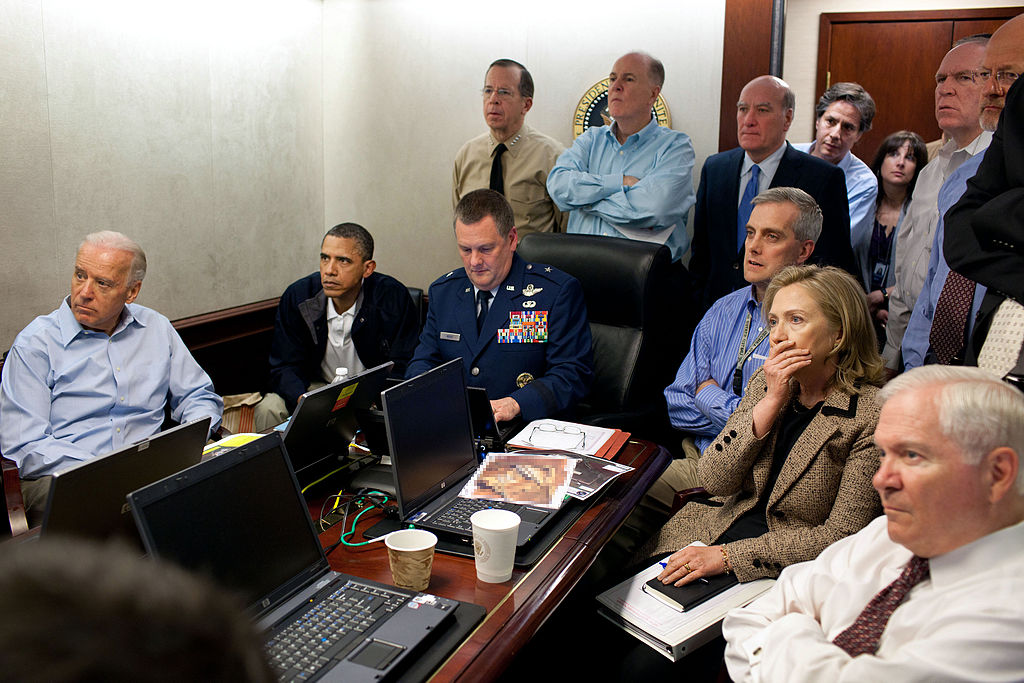 In a moment I am going to show you an interview that happened in the wake of the the alleged killing of Osama Bin Laden on May 2, 2011. It is not new information but these things are not reported heavily by the mainstream media, or any media for that matter, so it should be news to some of our readers.

The witness has a much different narrative of Operation Neptune Spear than we have heard in the media. You need to take this interview with a grain of salt because it could have been total propaganda. Nevertheless, we still await answers for a lot of inconsistencies and this man’s story could explain a few things if it turns out to be true.

Let’s explore one very big question, in particular, behind the operation to kill Bin Laden.

Why was no body produced?

The claim is that Bin Laden was buried at sea.

A lot of people feel that this treatment would make no sense. After all, if you have successfully killed Osama Bin Laden, wouldn’t you want to be able to prove it?

Many have used this single inconsistency to further the idea that Bin Laden had died many years earlier and that this raid never happened. That is entirely possible but this interview brings another possibility into the mix.

Muhammad Bashir in an interview with Sama TV claims to have witnessed the operation. He claims that the American helicopter exploded, before it could take off, leaving dead bodies everywhere with no survivors. He brings about an interesting question. What if Bin Laden’s body, dead or alive, was aboard that helicopter? Is it possible that the operation was really carried out but the narrative we have been given is inaccurate?

Before you totally discount this possibility, please consider that it has been admitted that one of the helicopters involved experienced problems and had to make a “soft crash landing.” It is said that none on board were seriously injured but, nonetheless, there has been an admission that we lost one bird that night. Wikipedia reports:

Since the helicopter that had made the emergency landing was damaged and unable to fly the team out, it was destroyed to safeguard its classified equipment, including an apparent stealth capability.[77] The pilot smashed “the instrument panel, the radio, and the other classified fixtures inside the cockpit,” and the SEALs “[packed] the helicopter with explosives and [blew] it up”. Since the SEAL team was reduced to one operational helicopter, one of the two Chinooks held in reserve was dispatched to carry part of the team and bin Laden’s body out of Pakistan.[35][54][56][103]

Newt Gingrich actually stated on “Meet the Press” on May 15th, 2011 that a helicopter was shot down. Was it an honest mistake or a slip of the tongue?

Does anybody — and notice, by the way, what the intelligence chief has apologized for. He’s apologized for the Americans getting bin Laden. He didn’t apologize for nine and a half years of failing to find him. He didn’t apologize for Pakistan having failed to do its duty. And who did the — who did the Pakistanis call the minute the American covert helicopter was shot down? They called the Chinese. Now, I would just suggest to you, we need to rethink carefully what do we mean by the word, ‘ally.’

Here is the interview which gives Muhammad Bashir’s account of what happened at the Abbottabad compound that night:

If you prefer to read a transcript of this interview, you can get one from Paul Craig Roberts here. The interview is very much real and did appear on Pakistani television. The accuracy of the account is anyone’s guess. Only high ranking government officials and those that were there really know what happened.

Let’s say that Muhammad Bashir is telling the truth just for the sake of exploration. Could this also have something to do with the SEAL Team 6 Chinook crash that happened just 3 months later? Could the Extortion 17 accident have been an attempt to cover up what really happened with the Bin Laden raid?

A lot of people have theorized as much, and if that helicopter really exploded at the Bin Laden compound that might give a little more credence to such a theory.

I present the interview above just for you to develop your own ideas about what may have happened. We can not overlook the multiple breaks in the story line that have been discovered. Many have alleged that the situation room photo, which appears at the very top of this article, is nothing more than a photoshopped image. Reggie Love revealed recently that Obama was not in the situation room for the duration and was actually playing spades.

Well known conspiracy theorist Alex Jones was actually on record with a prediction that something would happen to SEAL Team 6 members before the Chinook accident ever happened.

Among others, Michael Savage has asked a question that deserves an answer. Why were so many SEALs gathered together in such an archaic, “Vietnam era” helicopter?

Do we trust the testimony of a Pakistani man who claims to have been a neighbor to the compound?

Was Bin Laden dead years before this raid ever happened?

The biggest question on my mind is why we have so many inaccuracies in the story line. Though I don’t know that I would bet on the word of Muhammad Bashir, I certainly would not bank on anything that comes from the Obama Administration either.

We have seen this administration lie about many things, so why would this be any different?

I’d love to hear your thoughts.