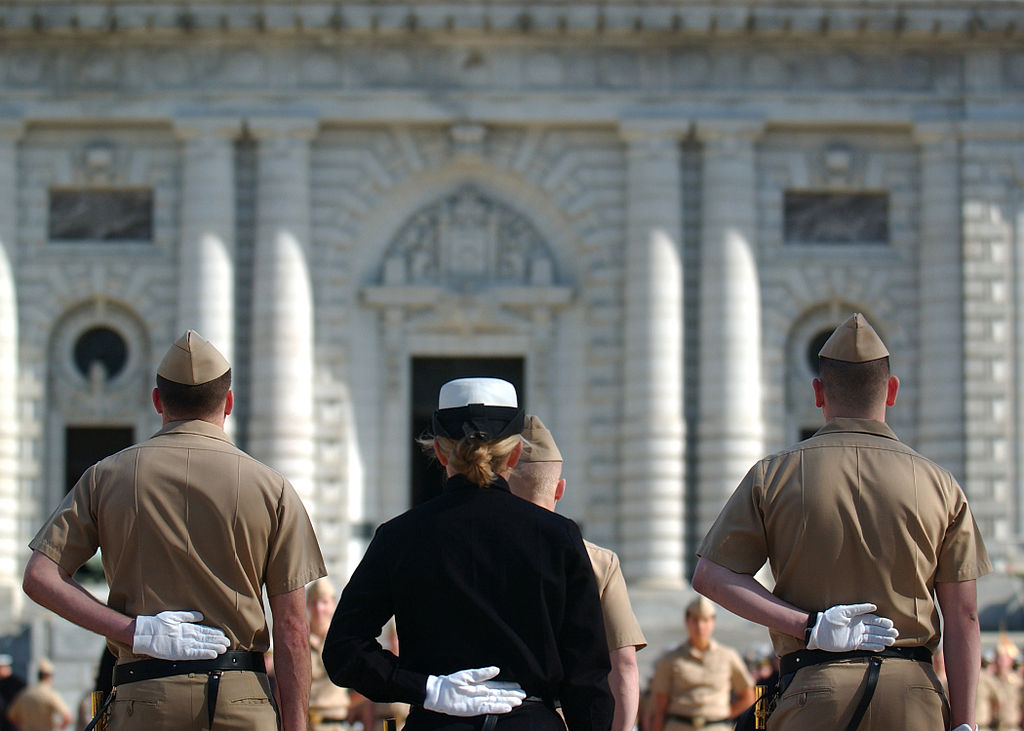 IIIT is a hardcore Islamic supremacist organization. The infiltration is so deep that operatives move seamlessly between government and jihad groups:

(DTN): IIIT was named in a May 1991 Muslim Brotherhood document — titled “An Explanatory Memorandum on the General Strategic Goal for the Group in North America” — as one of the Brotherhood’s 29 likeminded “organizations of our friends” that shared the common goal of destroying America and turning it into a Muslim nation. These “friends” were identified by the Brotherhood as groups that could help teach Muslims “that their work in America is a kind of grand Jihad in eliminating and destroying the Western civilization from within and ‘sabotaging’ its miserable house by their hands … so that … God’s religion [Islam] is made victorious over all other religions.”

In the early 1990s, IIIT invented and promoted the term “Islamophobia,” a term which implies that any societal fear associated with Islam is necessarily irrational, even if that fear stems from the fact that Islam’s prophet and its modern-day imams call on believers to kill infidels, or from the fact that the 9/11 attacks were carried out to implement those calls. Moreover, the term suggests that any negative societal reaction to such exhortations to violence reflects a bigotry that itself should be feared.

Former IIIT member Abdur-Rahman Muhammad — who was with that organization when the word was formally created, and who has since rejected IIIT’s ideology and terminated his membership in disgust — now reveals the original intent behind the concept of Islamophobia: “This loathsome term is nothing more than a thought-terminating cliche conceived in the bowels of Muslim think tanks for the purpose of beating down critics.” In short, in its very origins, “Islamophobia” was a term designed as a weapon to advance a totalitarian cause by stigmatizing critics and silencing them.

This plan was an outgrowth of the Muslim Brotherhood’s deceptive “General Strategic Goal for North America.”

Although the term was coined in the early 1990s, “Islamophobia” did not become the focus of an active Brotherhood campaign until after 9/11.

Promotional material issued by the International Institute of Islamic Thought (IIIT) indicates that US Naval Academy instructor Ermin Sinanovic is now serving as the IIIT Research Director. According to an IIIT announcement: September 12, 2013 The 2nd MACCPAC – TFI Youth Leadership Program was held at the IIIT headquarters during the week of August 12-16, 2013. MACCPAC’s mission is to promote mutual understanding and engagement in national security, human rights, justice, peace and democracy in the public squares all across the United States, and in other Muslim countries around the world. The purpose of the Youth Leadership Program is to create opportunities for Muslim American college and high school senior students interested in civic engagement and quality career development to meet Muslims who are leaders in those fields. Students represented colleges from Yale to George Mason, as well as metro area high schools.

Students heard from many speakers on a broad range of topics. These sessions included:  ‘Responsibility of Muslim Youth in America,’ ‘Political Education in America,’ ‘Information about the Media,’ ‘College education and career development,’ and many others.

As the week went on, student feedback was overwhelmingly positive. Nouran Ghanem, an aspiring doctor, said she walked away with a firm belief on the values of mentorship, ‘If I can reach an exceptional level in my career, then it’s my obligation to help those younger than me, and especially young Muslims just as this program has done for me’.

The program also included visits to local Muslim communities at Dar al-Hijrah, ADAMS, as well as a day trip to Washington, DC, and visits to Capitol Hill, the State Department, and the White House. The program successfully concluded on August 16 with a graduation ceremony which included a graduation speech by Dr. Yaqub Mirza, and certificates award to participating students.

Both Aktar Hossein and Sulayman Nyang are both close to the US Muslim Brotherhood and Abrar Omeish is the daughter of Esam Omeish, a former leader of the Muslim American Society (MAS), a US Muslim Brotherhood organization close to the Egyptian Muslim Brotherhood. In 2007, he resigned from the Virginia State Commission on Immigration following the pubic release of videos showing him condemning Israel and advocating “the jihad way.” In October 2012, US Secretary of State Hillary Rodham Clinton presented Abrar Omeish with a Girl Scout “100th Anniversary” pin during the State Department’s observance of the first International Day of the Girl Child.

According to his IIIT bio, Ermin Sinanovic is:

…an Assistant Professor in the Department of Political Science at the United States Naval Academy in Annapolis, Maryland, USA. He studied for an MA and a PhD in Political Science at the Maxwell School of Syracuse University. Prof. Sinanovic obtained two BAs (one in Qur’an and Sunnah Studies, the other in Political Science) and an MA (Islamic Civilization) from the International Islamic University Malaysia. His research interests include transnational Islamic revival, Southeast Asian politics, Islamic movements, Middle East politics, Islamic political thought, and Islam and politics in general. At the Naval Academy, Prof. Sinanovic teaches courses on Southeast Asian politics, Middle East politics, and Islam and politics. He speaks Bosnian, English, Arabic, and Malay. “

Dr. Sinanovic is also one of the founding members of the Bosniak Academy of Sciences and Arts, closely associated with Mustafa Ceric, the former Grand Mufti of Bosnia and an associate of  Global Muslim Brotherhood leader Youssef Qaradawi. In September 2008, IIIT met with Dr. Ceric to discuss a proposal to a new University in Bosnia with IIIT acting as a consultant.

Dr.  Sinanovic has also been featured at other IIIT events and as reported by the GMBDW in May, the  IIITannounced that he would be teaching at a summer school from 24 August – 7 September 2013 in Sarajevo, Bosnia & Herzegovina.  A flyer about the program indicated that the major speaker at the IIIT Bosnian summer school would be Global Muslim Brotherhood figure Tariq Ramadan. Our report also noted that one of the other instructors at the IIIT summer program would be US Muslim Brotherhood leader Louay Safi who was the subject of a pending criminal inquiry following the shooting at Fort Hood near Killeen, Texas on November 5, 2009 in the worst shooting ever to take place on an American military base. The inquiry followed revelations  that the US Defense Department had brought Dr. Safi to Fort Hood as an instructor and that he had been lecturing on Islam to troops in Fort Hood who were about to deploy to Afghanistan. Another instructor at the summer program was to be Jasser Aouda (aka Jasser Auda), a member of the IIIT Academic Council and a close associate of Youssef Qaradawi as well as Tariq Ramadan.

The International Institute of Islamic Thought (IIIT) describes itself as “a private, non-profit, academic, cultural and educational institution, concerned with general issues of Islamic thought and education” and using the slogan “Towards Islamization of Knowledge and Reform of Islamic Thought.”  The concept for IIIT was developed at a meeting held in Lugano, Switzerland that was attended by many luminaries of the Global Muslim Brotherhood including Youssef Qaradawi. IIIIT was founded in the U.S. in 1980 by U.S. Muslim Brotherhood leaders including Iraqi-born Jamal Barzinji and Hisham Altalib who wished to promote the Islamization of Knowledge as conceived by Ismail Al-Faruqi and who were also early leaders of the Islamic Society of North America (ISNA). A1991 internal document of the US Muslim Brotherhood, introduced as evidence in the holy Land Foundation trial, included IIIT in “a list of our organizations and organizations of our friends.” IIIT was associated with the now defunct SAAR Foundation, a network of Islamic organizations located in Northern Virginia that was raided by the Federal government in March 2002 in connection with the financing of terrorism and both organizations had been under investigation at that time by the U.S. Justice Department until at least mid 2007. The organization appeared to have withdrawn from public view following the 2002 raids but seems to be enjoying a renaissance of late. The IIIT Council of Scholars includes a number of important individuals from the U.S. Muslim Brotherhood such as Ingrid Mattson, the former President of ISNA. IIIT has a network of affiliates located in Europe, Africa, the MIddle East, and Asia and is heavily involved with publishing and promoting publications by Global Muslim Brotherhood leaders including Youssef Qaradawi who, according to one source, serves as an IIIT trustee.

As noted when we first reported Dr. Sinanovic’s relationship with IIIT:

While there is no evidence to date suggesting any improper behavior on the part of Professor Sinanovic, the GMBDW wonders about the propriety of an instructor for the US military being so closely associated with an organization that is intimately tied to the Global Muslim Brotherhood and to its putative global leader Youssef Qaradawi, a virulent anti-Semite and the head of an organization declared a terrorist entity by the US government who has called for attacks on US troops and civilians in Iraq and for the collapse of the US itself. Teaching alongside Louay Safi, depending on the state of the criminal inquiry into his activities, may also be a serious issue.