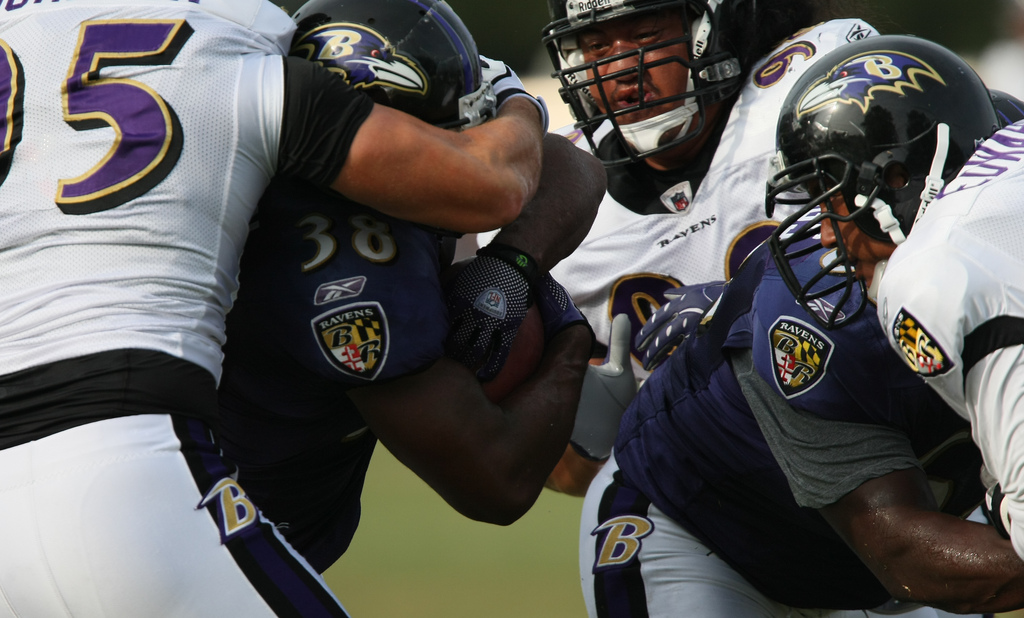 I have just lost all respect for the Baltimore Ravens front office. Not only have the defending Super Bowl champs decided to put their endorsement on Obamacare, they did it for a lousy $130,000.

Back in June the National Football League (NFL) decided not to get involved in the politics of Obamacare.

The National Football League appears to be bucking the Obama administration’s request to help promote the health care overhaul, as Republican lawmakers pressure all the major sports leagues not to get involved in the effort.

In a statement obtained by Fox News, an NFL spokesman said the league has “no plans to engage in this area and (has) had no substantive contact with the administration” about the implementation.

Earlier in the week, Health and Human Services Department officials said they were talking to the NFL, NBA and others about possible advertising campaigns, in the run-up to the launch of a key part of the health care law.

Going against the wishes of the league Baltimore decided to take a different route. Judicial Watch released this statement yesterday:

The professional football team that won this year’s Super Bowl is getting $130,000 from American taxpayers to promote Obamacare, according to documents obtained by Judicial Watch this week.

The deal was secured on September 9 between the Baltimore Ravens of the National Football League (NFL) and Maryland health officials. The White House has tried recruiting professional sports leagues — especially the NFL and the National Basketball Association (NBA) — to help promote the president’s healthcare law but they have declined.

In fact, the NFL confirmed months ago that it would not participate in the Obamacare public relations campaign, offering the media this written statement: “We have responded to the letters we received from members of Congress to inform them we currently have no plans to engage in this area and have had no substantive contact with the administration about [the health-care law’s] implementation.” Washington D.C.’s mainstream newspaper called it a “blow to the administration.”

But Maryland officials evidently appealed directly to the home team, announcing in early September that the Ravens would help market the state’s Obamacare exchange known as Maryland Health Connection. Both parties refused to offer specifics when the deal was initiated and Judicial Watch filed a Maryland Public Information Act request for details.

In a “Sponsorship Agreement” between the Maryland Health Connection and the Ravens, the state will pay the Super Bowl champs $130,000 to push Obamacare on television, radio, the team’s official website, its newsletter and in social media. This includes the Ravens Report Show on cable TV and a number of pre and post-game radio segments as well as Facebook and Twitter plugs.

While I respect the fact that the Baltimore Ravens franchise should have the freedom to make their own decision in this matter, it would appear that they sold out their fans for virtually nothing. As of August 2013 Forbes estimated the value of the franchise to be $1.227 Billion. $130,000 is nothing to owner Stephen Bisciotti. The current minimum player salary is $405,000 per year. Even a “practice squad” player earns $6,000 per week and these players may never play in an NFL game. This would barely cover 1 practice squad member for an entire season.

However, this endorsement should come as no surprise because Bisciotti’s political contributions tend to be earmarked for the Democrats.

Calling for a boycott of the Baltimore Ravens is not likely to work and not likely to make a difference. If they are like most NFL teams their tickets are sold out, or nearly sold out, for the season. An empty seat won’t hurt them if it is already paid for.

Besides, NFL fans don’t tend to let much get in the way of their favorite team.

So what can you do? You can flood them with calls and emails. Here is the contact information listed on their site:

Email Address
Contact us with any questions, comments, suggestions or concerns at [email protected].

I feel for the fans and the players who have to live with the shame of being Barack Obama’s lapdog team in the NFL. Don’t be surprised if more follow. NFL owners are generally GOP supporters by a margin of roughly 3-to-2 but the republicans do not have a monopoly on the league and there could be other teams that come out of the woodwork.

That is why we must do what we can to give the Ravens bad publicity over this decision. If they do not feel the bad PR then other teams will feel there is no consequence in following their lead.