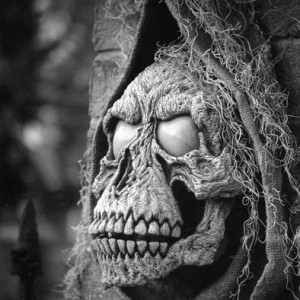 Do you want your kids to be taught that the earth has too many people and that they should have no more than two children for the good of the planet?  Yes, I know that this sounds absolutely crazy, but this is actually the kind of propaganda that is being forced upon our young people all over America.  The population control agenda is being relentlessly pushed in high school textbooks, in classroom instruction and by outside organizations that are given constant access to our high school students.  As you will see below, the number one population control organization in the United States, Planned Parenthood, conducts nearly 900 presentations in high schools in the Los Angeles area every single year.  And the population control propaganda gets even worse once our kids go off to college.  I know – I spent eight years in the classroom at U.S. public universities and most parents would be absolutely horrified to learn what their children are being taught.

These days, the population control propaganda is becoming more blatant than ever.  Recently, Father John Hollowell was walking down the halls of an Indiana high school when he came across the following banner hanging above some lockers… 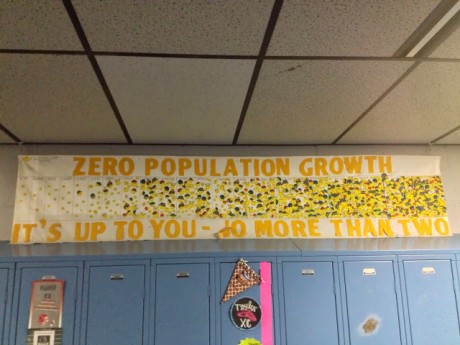 At first when I walked past the sign I thought to myself – “Oh, cool, they’re starting to catch on that our population levels are at a critical phase and that we’re heading for a demographic winter because no one is having kids anymore; they’re trying to get the word out that our population growth is trending towards a crisis….”

Then I literally had a sick feeling in my stomach when I realized I had the sign completely wrong.

My jaw hit the floor.  Margaret Sanger and Planned Parenthood’s “Theology” on full display in our public schools.

You can’t probably read the sign but it has one smiley face representing 10 million people…and I mean look at the sign…if people keep having kids the smiley faces won’t fit in the box anymore!  Look how scientific it is (sarcasm).

Sadly, this was not an isolated incident.  The truth is that this type of philosophy is being relentlessly pounded into the heads of our teens.

Planned Parenthood Los Angeles’ high school sexuality education program focuses on the important decisions that young people have to make about their sexuality and offers information and resources that enable teens to take responsibility and make healthy choices, including abstinence. Educational sessions are presented to ninth grade students, with an effort to provide a comfortable and informative learning experience. Topics include: Sexuality, Teen Pregnancy, Healthy Bodies, Sexually Transmitted Infections (STI’s), and Birth Control. Sessions are facilitated by trained speakers credentialed by Planned Parenthood who have undergone a rigorous 40-hour training course. The High School program conducts almost 900 presentations each year by invitation to over 30 schools, and serves Metropolitan Los Angeles, the San Fernando Valley, and other areas, based on availability.

Is that what you want your kids to be taught?

They specifically target poor people, and this is an organization that actually believes in post-birth abortion…

Florida legislators considering a bill to require abortionists to provide medical care to an infant who survives an abortion were shocked during a committee hearing this week when a Planned Parenthood official endorsed a right to post-birth abortion.

Alisa LaPolt Snow, the lobbyist representing the Florida Alliance of Planned Parenthood Affiliates, testified that her organization believes the decision to kill an infant who survives a failed abortion should be left up to the woman seeking an abortion and her abortion doctor.

“So, um, it is just really hard for me to even ask you this question because I’m almost in disbelief,” said Rep. Jim Boyd. “If a baby is born on a table as a result of a botched abortion, what would Planned Parenthood want to have happen to that child that is struggling for life?”

“We believe that any decision that’s made should be left up to the woman, her family, and the physician,” said Planned Parenthood lobbyist Snow.

Overall, more than 55 million abortions have been performed since Roe v. Wade was decided in 1973 and there is no indication that this is going to stop any time soon.

In fact, progressives are always seeking to do even more to push the population control envelope.

In a recent Slate article entitled “Canada Has Death Panels (And that’s a good thing)“, one liberal blogger suggested that the United States should consider copying Canadian death panels…

Last week Canada’s Supreme Court ruled that doctors could not unilaterally ignore a Toronto family’s decision to keep their near-dead husband and father on life support. In the same breath, however, the court also confirmed that, under the laws of Ontario, Canada’s most populous province, a group of government-appointed adjudicators could yet overrule the family’s choice. That tribunal, not the family or the doctors, has the ultimate power to pull the plug.

In other words: Canada has death panels.

And in Europe things are even worse.

In the Netherlands, mobile euthanasia teams are now going door to door to help elderly patients end their lives in the comfort of their own homes.  And the European Parliament has been considering a proposal that would officially make abortion a “human right”…

The Progressive Alliance of Socialists and Democrats in the European Union passed a draft report last month declaring that abortion is a “human right”.

This week, the European Parliament will vote on that measure, and if passed, could have devastating effects throughout Europe. It also shows the lengths abortion advocates will go to in order to not only make abortion legal, but widespread… even if it means trampling on individual rights.

In many of my previous articles, I have discussed how the global elite love population control, but they are not alone.  Over the past several decades they have convinced most people living in the western world to willingly get on board with the population control agenda.

At this point, even most Americans are “sheeple” that go along with whatever their televisions tell them to think.  This was illustrated beautifully by Mark Dice recently.  He asked random people to sign a petition supporting a “Nazi-style Orwellian police state” and many signed the petition without even thinking about it…

So is there any hope for us?