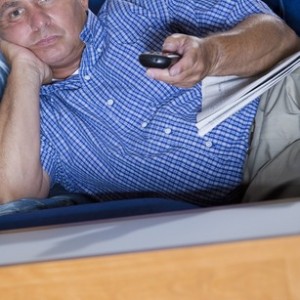 The Obama administration and the mainstream media continue to insist that we are in the midst of an “economic recovery”, but that is a total joke.  Does the chart posted below look like a recovery to you?… 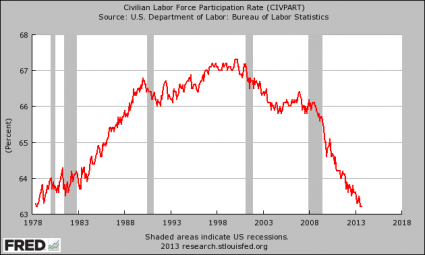 Americans are leaving the labor force in droves.  If the labor force participation rate was at the same level that it was when Obama first became president, the official unemployment rate would be up around 10 percent and everyone would be wondering when the “economic depression” would finally end.

It is funny how our perceptions of reality are so greatly shaped by what our televisions tell us to think.

Below I have posted a chart of the “inactivity rate” of U.S. men in the 25 to 54-year-old age group.  As you can see, the percentage of men in their prime working years that are not employed and not considered to be unemployed either has been rising steadily… 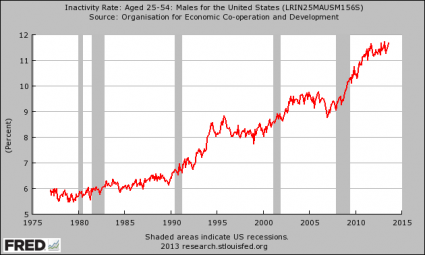 We have millions upon millions of men just sitting around and doing essentially nothing.  Not that women are doing so much better.  In fact, the labor force participation rate for women is at a 24 year low.

Some people may be tempted to think that all of this is happening because more Americans are choosing to stay home and raise children.  But that is not the case at all.  In fact, in a previous article I showed that the marriage rate in the U.S. is at an all-time low and the birth rate for young women in this country is also at an all-time low.

And when Americans that are actually employed do lose their jobs, it is taking them a very, very long time to find another one.  Just check out the following chart… 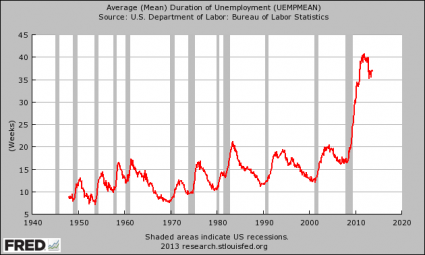 Once again, I must ask – does that look like a “recovery” to you?

Obama can say the word “recovery” as much as he would like, but that does not make it a reality.

So is anyone out there actually doing well?

Yes, as I have talked about frequently, some pockets of the country are doing quite nicely.  In fact, government workers (think Washington D.C.) and finance workers (Wall Street, etc.) are tied for the lowest rates of unemployment in the nation (3.9 percent).

But for almost everyone else, things are very hard right now and poverty continues to grow.

Just today, I came across a recent study that discovered that nearly half of all public students in the United States come from low income homes.

That is an incredible number.

But this is just the beginning of our problems.  Our debt continues to grow by leaps and bounds and our big banks are engaging inextraordinarily reckless behavior.  As Richard Russell recently discussed, it is only a matter of time before this entire house of cards comes tumbling down…

In this whole process, debt has been created to an extent never seen before in history.  So far, the debt has been managed with super-low interest rates and borrowing.  But the compounding process goes on, and the debt mountain continues to grow.  So, to be brief, I see the theme of today as the “haves” doing whatever they have to — to remain in power.

The dangers in the background for the haves are the possibilities that (1) interest rates will begin to advance, and (2) inflation will rise and be so visible that even the common man will recognize it, and begin to protest, or even revolt and (3) the whole debt structure will rise so high that it will topple over of its own weight and take down the entire world economy with it.

So as bad as things are today, the truth is that they are far, far better than what is eventually coming.

If you want to get a glimpse of the future of the U.S. economy, just check out what has happened to Greece…

Greeks are on average almost 40 percent poorer than they were in 2008, data indicated, laying bare the impact of a brutal recession and austerity measures the government may be forced to extend into next year.

Gross disposable incomes fell 29.5 percent between the second quarters of 2008 and 2013, statistics service ELSTAT said on Tuesday. Adding in cumulative consumer price inflation over the same period takes the decline close to 40 percent.

As you can see from the charts posted above, our economy has never even come close to getting back to the level that we were at before the last financial crisis.

And now the next wave of the economic collapse is approaching.

We will eventually be heading up toward those levels.

As millions of good paying jobs continue to be shipped overseas, and as technology continues to eliminate millions of our jobs, the unemployment situation in this country will continue to grow even worse.

And whenever the next great financial crisis inevitably strikes, that will greatly accelerate our employment problems.

If you can move toward becoming more independent of the “system”, now would be a good time to do so.  The job that you have today may not be there next month or next year.

We are moving into the greatest period of economic instability in U.S. history.

Get ready for it while you still can.