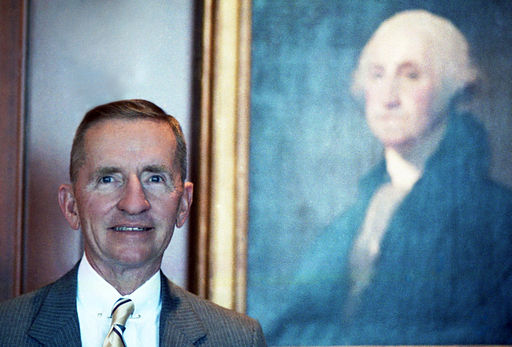 I remember the 1992 presidential campaign and election very well. At the time I was a young man who was only starting to explore the political process. Back then I was already somewhat of the “anti-establishment” type and though I liked George Bush, I could not get enough of Ross Perot. I was not the only one who felt this way.

I was sold on Ross Perot. I was hanging on his every word. Any candidate who was unwilling to accept political donations and run for the presidency, with entirely his own money, had my attention. But then something amazing happened.

Perot dropped out and blamed it on the republicans.

Perot eventually stated the reason was that he received threats that digitally altered photographs would be released by the Bush campaign to sabotage his daughter’s wedding.[30] Regardless of the reasons for withdrawing, his reputation was badly damaged. Many of his supporters felt betrayed and public opinion polls would subsequently show a large negative view of Perot that was absent prior to his decision to end the campaign.[31]

Perot would eventually re-enter the campaign but was no longer a threat to win. The result was that Bill Clinton had vaulted from 3rd in the polls to becoming President of the United States. Perot received a respectable 19% of the popular vote, which was less than half of his earlier poll numbers.

Though political historians will tell you that exit polls showed that he took away from Clinton and Bush somewhat equally, I would challenge that notion. His allegations toward the Bush camp certainly didn’t help the republicans and those people may have voted for Clinton while avoiding both Bush and Perot entirely. Not all polls tell the whole story. He dropped from 39% to 19% so those votes went somewhere. Polling the 19% tells us nothing. We need to know where the 20% went.

A few weeks ago a serious allegation was made by Larry Nichols in an interview with Jeff Rense. Nichols was a Clinton confidant for many years and he would be one to know what was going on back then. The only question is whether or not Nichols is telling the truth. He went from being a strong Clinton supporter to later being a key witness for the prosecution during his impeachment.

So this is here say and please do not confuse it as fact. These are the words of Larry Nichols in his interview with Jeff Rense:

“Everybody thought Ross Perot was trying to win. As a matter of fact he got close to winning. Now all of the sudden he went crazy and kind of backed out and got back in. What people didn’t know is that he was put in as a ringer. Hillary was leading the charge for the health care program and Ross Perot had the computer contract, his company, for the health care program. Fortunately it didn’t get passed.”

If you are to dig deep into your core values and search the inner depths of your soul, do you believe that any man that is worth this much money could have really had America at heart in 1992? My opinions have changed over the years and what I once saw as the heroic candidate that was about real change, I now see as just another guy who had some really good PR people. I don’t believe that Perot is the man I thought he was and it has little to do with this interview.

But, if this were the truth, it begs the question of how far these people will go to win. If they will go so far as to find a “ringer” candidate for president and control that candidate then how far will they go?

All the recent allegations of democrats funding libertarian campaigns to take votes away from republicans is small potatoes compared to these allegations.

Anyone who would contract a “ringer” 3rd party candidate in order to guarantee their own victory will stop at nothing to win. Does it really matter who the republicans put up against Hillary Clinton in 2016? Her own party has all but given her the nomination already. That is disturbing in and of itself.

We may never know the whole story of Ross Perot. He ran again in 1996 and received about 8% of the vote. He was such a non-factor by 1996 that I had honestly forgotten that he ran a second time.

Before you totally dismiss the allegations of Larry Nichols just consider the facts. Did he hurt President Bush’s chances for re-election? Without a doubt. You can’t throw out a story like he did without hurting the credibility of the candidate who was accused of such dirty politics.

Whether they had faith in Perot is another issue but he certainly had to drive a number of votes from Bush to Clinton because they obviously did not flock to him. Add to that the fact that to this day Ross Perot has provided no proof of his allegations against the Bush Administration.

Was the real giant sucking sound the money that Perot was planning on fleecing from unsuspecting Americans as a loyalty kick back for his dirty deeds? He would not be the first billionaire to put money above people.

Or was he sincere? For what it’s worth, I hope he was but I wouldn’t bet on it. This is one of the only presidential candidates that I have ever truly believed in. In the end I simply chalk him up as another man who knew how to play the game and was part of the problem and not part of the solution.

Note: For the sake of reference, here is the Nichols interview. To hear his comments about Perot please pick up part 1 at the 12:15 mark. I am also including part 2 of the interview for those who want to listen to it fully. I have yet to listen to part 2, so if he dropped more bombshells please let me know. -Dean