It seems to NEVER end for this administration…for this president…and yet he remains in office NO matter what improprieties come to light. Everything Obama does seems to roll off him…to roll of him as his cohorts and minions circle their wagons around the man the media anointed as the great black ‘savior’ of us all.

And let’s NOT forget all the ObamaCare lies NOT only about the ACA itself, but the lies surrounding the nightmare of a government sign-up website that simply does NOT work…a website federal officials failed to fully test even after one small test crashed the site.

In fact yesterday, Senior Vice President Cheryl Campbell of contractor CGI Federal, in testifying before the House Energy and Commerce Committee…the committee investigating the website’s failures…said the HealthCare.gov site should have been tested for months before it went live, and that her company informed the White House there were operational problems with the website BEFORE it debuted on October 1st, and yet the White House did NOTHING about it.

And so the Obama White House chose NOT to delay its rollout because that would have delayed Obama’s causing ‘We the People’ pain…something he so likes to do.

Obama’s namesake healthcare bill is his hallmark piece of legislation…that’s what he keeps telling us…the highlight of his legacy…and he is protecting it like a mother lion protects her cubs…yet his legacy now seems to be tarnished…maybe even beyond repair…and rightly so.

So is Obama fainting yet from all the lies…from all the cover-ups…from all the shame that is HealthCare.gov…phony fainting for the camera like his Rose Garden prop did a few short days ago. NO of course NOT as his narcissistic self would NEVER allow that, yet true to form in the midst of this political circus of horrors and hyped-up on his self-perceived victory in raising the debt ceiling, the ‘anointed one’ is hightailing it out of DC to hit the campaign trail for eight fundraising events over the next few weeks for House and Senate Democrats running in 2014.

Leaving the fallout in DC behind…running away like the coward he is…leaving others to shoulder the blame and to clean up his mess…yet maybe this ObamaCare mess just got a bit too big for even his cronies to clean for right on cue enter center stage yet another diversion to try and force us to look away. But this diversion can have major ramifications as it’s a major breach of trust x 35…for it seems Barack HUSSEIN Obama has been a bad boy again as the NSA has been monitoring…and the final orders to do so could only have come from the top…the personal phone calls of at least 35 world leaders.

NOT good…NOT good at all.

And who exposed this yet another scandal in the making…none other than whistle-blower Edward Snowden who in a classified document revealed that after being given phone numbers by an official in another government department, senior officials in ‘customer’ departments such the White House and the Pentagon were “encouraged” to share their contact list details with the NSA…the infamous spying on ‘We the People’ National Security Agency…who then added the phone numbers of world leaders to their surveillance lists and then started to ‘spy’ on them…to ‘spy’…to listen in on…to bug their personal phone calls…a breach of recognized diplomatic protocol.

And wouldn’t it be quite interesting to see Vladimir Putin’s name on that list. 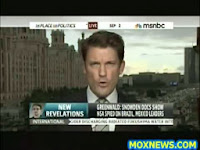 200 phone numbers to 35 world leaders…many allies and friends including the leaders of Brazil, Mexico, and France…and Germany’s Chancellor Angela Merkel who was the first of the 35 to come forward and who is anything but happy about this…as I’m sure the others will NOT be as their names come to light. Yet the Obama White House denied listening in on Merkel’s phone calls saying that the US government “is not monitoring and will not monitor” her phone calls.

So then why did Obama mouthpiece Jay Carney issue a statement saying, ‘The [NSA] revelations have clearly caused tension in our relationships with some countries, and we are dealing with that through diplomatic channels. These are very important relations both economically and for our security, and we will work to maintain the closest possible ties.”

Hmmm…Obama denies monitoring has been going on yet Carney admits it has been. I wonder if Carney will now be called to task for contradicting the ‘anointed one’…called to task just like the low-level government worker with the Twitter account criticizing Obama was…as in he was fired. We just might be getting a new press secretary pretty soon with the excuse that he is moving on to a private sector position.

And rest assured all this will surely be the albatross around the neck of the upcoming EU summit in Brussels as beyond furious European leaders have threatened to delay or outright cancel important trade negotiations with us, and have even hinted that this could very well disrupt the joint counter-terrorism collaborations currently in place.

And once again Barack HUSSEIN Obama built it and owns it all.