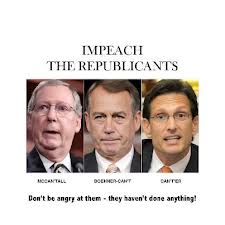 The capitulation of the leadership of the Republican Party in the showdown over the what was sold as a “government shutdown”, should not surprise anyone.

What is surprising is that, in light of the track record of the conservative party, so many people would expect any other result.

Isn’t this the conservative party that always folds its cards when the liberals/progressives/socialists go “all in”?

In fact, what has this party ever conserved, other than the liberal victories of it’s supposed adversary?

And is this anything new under the sun?

It might be instructive to examine what Robert Lewis Dabney wrote about these folks way back in 1897:

This is a party which never conserves anything. Its history has been that it demurs to each aggression of the progressive party, and aims to save its credit by a respectable amount of growling, but always acquiesces at last in the innovation. What was the resisted novelty of yesterday is today one of the accepted principles of conservatism; it is now conservative only in affecting to resist the next innovation, which will tomorrow be forced upon its timidity and will be succeeded by some third revolution; to be denounced and then adopted in its turn. American conservatism is merely the shadow that follows Radicalism as it moves forward towards perdition. It remains behind it, but never retards it, and always advances near its leader. …Its impotency is not hard, indeed, to explain. It is worthless because it is the conservatism of expediency only, and not of sturdy principle. It intends to risk nothing serious for the sake of the truth.

Anyone, including those who identify with the “Tea Party”, who loves America and desires real reform, would do well to disengage themselves from the Republican Party and their brand of worthless, Godless, unprincipled conservatism.

Because with these folks, failure is never a surprise.

Video Commentary on this topic: