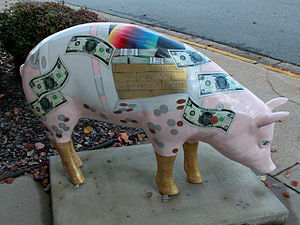 Little was ever reported on some indefensible sections in the health care law. Remember, no Republican voted for this monstrosity. A few media organizations, Fox, Newsweek and a few financial/insurance websites, exposed this: Section 1102 Reinsurance for Early Retirees, more commonly known as ERRP.

I condensed the section to isolate specific terms and to show proof of appropriated funding totaling $5 Billion dollars:

(1) IN GENERAL.—Not later than 90 days after the date of enactment of this Act, the Secretary shall establish a temporary reinsurance program to provide reimbursement to participating employment-based plans for a portion of the cost of providing health insurance coverage to early retirees (and to the eligible spouses, surviving spouses, and dependents of such retirees) during the period beginning on the date on which such program is established and ending on January 1, 2014.

(A) HEALTH BENEFITS.—The term ”health benefits” means medical, surgical, hospital, prescription drug, and such other benefits as shall be determined by the Secretary, of insurance or otherwise.

(I) maintained by one or more current or former employers (including without limitation any State or local government or political subdivision thereof), employee organization, a voluntary employees’ beneficiary association, or a committee or board of individuals appointed to administer such plan; or

(C) EARLY RETIREES.—The term ”early retirees” means individuals who are age 55 and older but are not eligible for (MEDICARE) coverage under title XVIII of the Social Security Act, and who are not active employees of an employer maintaining, or currently contributing to, the employment based plan or of any employer that has made substantial contributions to fund such plan.

(e) FUNDING.—There is appropriated to the Secretary, out of any moneys in the Treasury not otherwise appropriated, $5,000,000,000 to carry out the program under this section. Such funds shall be available without fiscal year limitation.

The $5 billion program (bailout) provided “financial assistance” for “employers” – businesses, unions, state and local governments and a few nonprofit organizations that offer health care benefits to their employees. Money for this program was supposed to be a “bridge” for businesses and individuals until all the “tax credits” and subsidies went into effect once competitive insurance markets became available once the law was fully implemented. The benefits referred to in the law cover “early retirees,” their spouses and dependents as part of their union and some non-union negotiated “benefits” packages, which basically shifted the cost of these benefits for government and other union employees onto taxpayers.

Unknown to many of our representatives, the Democrats were not only passing a new healthcare law, they were also “appropriating” money to fund this law as well as allocating funding for “grants” to “reward/repay all those financial supporters” and there continues to be preferential treatment given to large corporations and unions in the form of waivers and exemptions since the law passed – crony capitalism at its finest. Remember the Senate introduced their version via a questionable “amendment” process. Troubling, since all bills raising “revenue” “shall originate in the House.” Like other such deals that this administration has been involved in, “big name” companies, unions and organizations receive the bulk of any money appropriated in legislation – indefensible, dishonest, and reprehensible.

The following websites provided some of the statistics and information available and presented below: PewStates.org, Heritage.org and NationalReview.com.

A complete list of all the recipients can be found at www.gao.gov and www.errp.gov. A partial list is posted at the end. Encouraging people and businesses to apply for all this free money wasn’t exactly difficult, so it’s not surprising that Obama’s Health and Human Services is boasting that it “has received applications from more than 50 percent of Fortune 500 companies, all major unions, and government entities in all 50 States and the District of Columbia.” Some interesting facts:

In case some have forgotten, GE had a $14.2 Billion profit in one year and paid nothing in federal taxes. “How can you justify giving out so much of taxpayers’ hard earned money to these profitable corporations?” Florida Rep. Cliff Stearns said at a legislative committee hearing in questioning Steve Larsen, a senior director at the Centers for Medicare & Medicaid Services (CMS), which runs the program. Larsen replied that the program enabled those companies to continue to offer retirement benefits.

Republican lawmakers said that profitable corporations should be responsible for providing retiree health coverage without help from the government. “You think this health care system that Democrats passed is so successful, why in the flip are you giving out so much money of taxpayers so freely and overwhelming to companies that are profitable?” Stearns asked Larsen. Also, see this documentation.

The Obama administration “has lavished millions in taxpayer dollars on politically savvy corporations and unions” and is a harbinger of more things to come. “This raises the question of how high the federal government’s tab for the nation’s healthcare costs is likely to run and how much it could add to the national debt. Like everything else our government and this administration has done the money always ends up in the pockets of financial institutions, large corporations, unions and benefactors who all want favorable policies in exchange for campaign donations each election cycle leaving us “common folks” picking up the tab. When politicians talk about cutting the deficit, programs that dole out goodies to favored constituencies should be the first to go.”

Another fact about the New Health Care Law is that $500 billion was taken from Medicare to implement all the new “entitlement” programs – proof in follow-up article. Taxpayers have funded bankrupt companies like Solyndra and other green energy corporations, owned by campaign bundlers. Bankruptcy Law requires that investors be paid first, but this administration “changed the rules” to fit their political agenda and to appease their base. In Solyndra, investors were paid first; in GM bankruptcy, unions were first in line. Changing the bankruptcy laws to favor “unions” is a prime example of how this administration utilizes its executive power enforcing those laws that further either their ideology or political agenda. After all is said and done the one stuck with the bill – the taxpayer. These are just a few examples that epitomize the wasteful spending of our “hard earned money;” yet no one is ever charged much less prosecuted.

Currently, public employee sponsored healthcare plans throughout the country are unsustainable, underfunded just like their pension plans. The Pew Foundation reported that 20 states have only paid in about 7.1% to fund their healthcare plans, plans that are supposed to cover the healthcare expenses of their retirees.

The law required CMS develop a mechanism to monitor the “appropriate use” of all the money received by all these entities. Comforting considering there’s been very little accountability thus far. CMS also paid for the development of the “website” being touted by Obama. The funds for this debacle came from CMS utilizing Medicare Trust Fund accounts.

TARP, Omnibus package, and other legislation was supposed to “save us from the brink of destruction.” Research done through the years has caused me to question the intentions and purpose of all the legislation, policies and treaties signed over the years. Interesting how uninformed Americans are and how accountability along with transparency went out the window decades ago. There is so much they are not being told. Unions and retirees are currently lobbying Congress to change existing bankruptcy laws along with other policies beneficial to them, costly for all taxpayers. How to expose what’s been going on over the past century involve well entrenched organizations and elitists and is unforgiveable. Sounds a bit machination, but information exists that that our Constitution and Republic has and is being undermined by those who want to destroy this country.

List of those receiving money came from the following websites:

http://www.buckconsultants.com/portals/0/publications/fyi/2012/fyi-2012-0224-Early-Retiree-Rein-Prgm-Funds-Exhausted.pdf and more can be found at:

Compilation of entities that received money under this program:

Department of Finance and Administration—Mississippi $19,890,691

Pension, Hospitalization and Benefit Plan of the Electrical Industry $4,920,494

President and Fellows of Harvard College $929,113

Community Hospital of the Monterey Peninsula $463,760