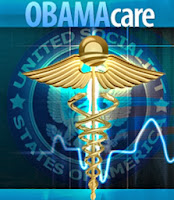 Fact: to date in just 3 states alone…California, Florida, and Pennsylvania… Obamacare has caused 750,000+ Americans to be dumped from their current insurance plans…plans they were happy with…for NO other reason than because the ObamaCare exchanges have opened…even though its namesake said that “if you like your doctor you can keep them…if you like your current health care plan you can keep it…period.”

Also to date, in all 50 states only about 476,000 applications have been registered with an exchange…meaning Obamacare has caused more people to lose their health insurance than gain health insurance…and the losses are now spreading to other states as well.

So now the real truth about ObamaCare must be told…the one truth Obama does NOT want spoken of…the truth that ObamaCare was conceived and born to fail so that on its death Obama could expand Medicaid and initiate a single-payer system for health care….so that Obama could reach his true objective to redistribute ‘We the People’s’ wealth and use ObamaCare as the means to help fund his entitlement programs for the ‘sponges’ of our society in exchange for their unwavering loyalty to the Democratic party.

Bottom line…ObamaCare is the harbinger of a total socialist takeover of America’s health care system.

Brutal words I know but remember, calculatingly and with malice, the Democrats in Congress shoved the Affordable Care Act …otherwise known as ObamaCare… down ‘We the People’s’ throats in a middle of the night partisan vote. Trying to tell us that ObamaCare would benefit America’s hardworking middle class, the reality remains that ObamaCare was deliberately designed and executed to hurt the very people it claimed it wanted to help. 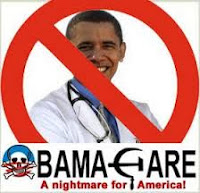 And the only way to rid ourselves of the monstrosity that is ObamaCare is for Republicans… preferably TEA Party Republicans…to retake the Senate and keep the House in the 2014 midterms…and then defund this abomination…doing it with enough votes to override what would surely be Obama’s veto.

The 2014 midterms are our last chance…NO ifs ands, or buts…and the infighting amongst the Republicans must stop…and stop now if we are to do just that for if we don’t, as bleak as the future of America’s health care system currently is under ObamaCare, the harsh reality is that the pain we currently are feeling because of this monstrosity will only get worse…much worse as soon every single American will feel the pain in their pocketbooks. And never mind the rhetoric that ObamaCare’s rah-rah section keeps spewing out that 30 million Americans who previously did NOT have health insurance will now have it because that is simply an out-and-out lie.

And truth be told I really do NOT care about the majority of those NOT insured (and don’t go calling me to task as I am NOT talking about the truly needy), because for the most part that number is comprised of the ‘sponges’ of our society whose hands are always out and who can already walk into any emergency room in this country and NOT be turned away.

An out-and-out lie proven by figures recently released in a non-partisan Congressional Budget Office (CBO) report which stated that when all is said and done more that 30 million ‘non-elderly’ Americans will still be without health insurance in 2022…as in ‘non-elderly’ Americans are smart enough to say a resounding NO to ObamaCare…to say NO because they know you cannot build a successful health care system on the backs of and based upon the pocketbooks of America’s young adults maintaining it.

And these folks are smart enough to know the truth…the real truths about ObamaCare…the truths Obama does NOT want you to know…including (among other things) that Medicaid will be expanded as Medicare payments and services will be cut (to a tune of $700 billion in service rollbacks) to allow for the more than 15 million who will be added to the Medicaid rolls. Another truth is that employers who do NOT comply with ObamaCare will be fined to a tune of $2,000 per employee with this being the death knell for countless small businesses. And still another truth is that the Individual Mandate Tax…otherwise known as ‘the fine’…for those who chose NOT to have insurance will soon exceed $2,000 per person per violation.

Now add in that the government…meaning Obama and his cronies…will decide what the ‘essential must-have benefits’ of every insurance policy…even those NOT in the ObamaCare exchanges…are to be. Plus, ObamaCare will actually add monumental costs to the burden ‘We the People’ are already carrying as there are subsidies for low-income households…as in Obama’s future Democratic voters.

And when all is said and done it will be we taxpayers who will foot the bill for about half of ObamaCare’s funding and it will come in the form of new taxes and fees.

ObamaCare…a monstrosity whose cost estimates…according to the CBO…for both implementation and sustainability have already tripled and will continue to rise unchecked from the original quoted numbers.

Talk about the screwing of the American middle class…