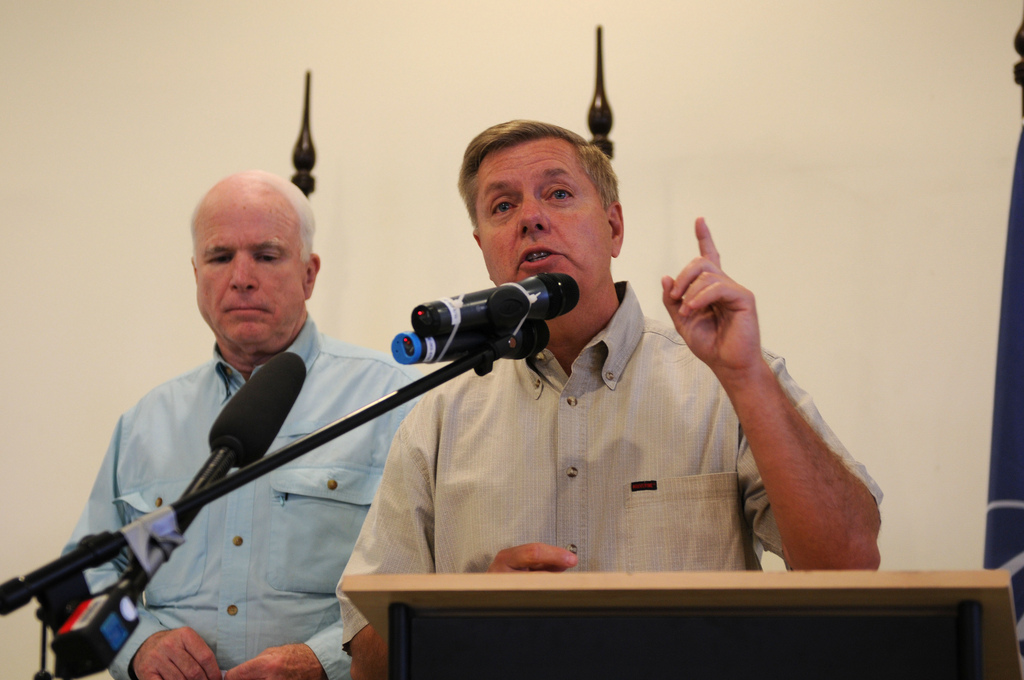 There are few names in the Conservative world that invoke as much negativity as “Lindsey Graham.” Other than his Liberalese twin, John McCain, Graham has consistently been the most prominent RINO (Republican In Name Only) in the United States Senate.

Senator Lindsey Graham has represented the state of South Carolina since 2003. South Carolina is typically considered to be a Conservative stronghold, sending people like Jim DeMint, Trey Gowdy and Jeff Duncan to Washington to represent them. Somehow, Lindsey Graham has managed to repeatedly dupe the people of SC into thinking that he is a Constitutional Conservative, even though his voting record and his statements say otherwise. He has managed to hoodwink South Carolinians… until now.

During his time in the Senate, Lindsey Graham has been little more than a puppet for the Obama regime, constantly touting their progressive talking points as “compromise” and “bi-partisanship.” Most recently, Senator Graham supported The Affordable Train Wreck by voting in favor of cloture, while his fellow SC Senator, Tim Scott, listened to the voices of his constituents and voted against it. He then proceeded send out an email to his constituents, and proudly bragged on Facebook about how he had voted against funding Obamacare.

Senator Graham constantly hypes himself as a fiscal conservative… but I’m not really sure he knows what that means. Yes, he has voted for some cuts, but he also supported a massive internet sales tax and repeatedly advocated giving away money to foreign nations and private companies, even when the United States was trillions of dollars in debt. He opposed making the Bush Tax Cuts permanent, he supported the TARP bailout, he supported the Fannie Mae and Freddie Mac bailout, and he opposed Senator Rand Pauls’ attempt to end foreign aid to Egypt. I don’t consider these actions to be worthy of the title “fiscal conservative.”

Senator Graham also claims to be a supporter of the Bill of Rights and a defender of the Constitution, but once again, his voting record disagrees with his claims. Senator Graham not only supported the NSA spying on American citizens, he went on to say “I don’t mind Verizon turning over records to the government,” and “I’m sure we should be doing this.” Well Senator Graham, a lot of your constituents aren’t sure. We consider it to be a violation of our privacy. Senator Graham also supported further infringements on gun rights, supported the PATRIOT Act and he attended a dinner with Barack Hussein Obama while Senator Rand Paul was filibustering on the floor of the Senate about the use of drones on American citizens. For now, I won’t even get into his stance on war in Syria or his comments about invading Iran. All in all, his record isn’t what I’d call stellar.

For too long the people of South Carolina watched Lindsey Graham repeatedly lie, pay homage to the regime, and assault our God given, Constitutionally guaranteed rights. As his bid for re-election approaches in 2014, three different “Tea Party” (or as Lindsey’s buddy John McCain would call them, “wacko bird”) candidates have emerged. Richard Cash and Nancy Mace have both identified themselves as conservative candidates, but neither have a voting record to back it up.

Which brings us to State Senator Lee Bright. Lee Bright has a stellar record in the state senate. He has been an outspoken critic of the current regime, a champion for Constitutional rights, and a true Conservative. Paul Conner from The Daily Caller referred to Bright as a “libertarian leaning Republican in the mold of former Texas Rep. Ron Paul.” Glenn Beck said that Bright reminds him of Ted Cruz. Of course since Harry Reid has inferred that Ted Cruz is a “Tea Party anarchist,” some people may not consider that a compliment.

Lee Bright has a voting record that proves he is a true Conservative. Despite constant opposition from Democrat and RINO alike in the SC state senate, he has stuck to his principles and consistently been a resonating voice for liberty. He has stood strong on the value of the Constitution and its relevance today.

While Lindsey Graham was ready to further infringe on the 2nd Amendment rights of his constituents, Lee Bright was the primary sponsor of the Constitutional Carry Bill in SC. He also sponsored legislation for term limits, sponsored the Freedom of Choice in Healthcare Act, was the sole sponsor of the Religious Freedom Act, was the primary sponsor of a bill that would allow permit holders to carry on college campuses, and was the sole sponsor of a bill that would protect SC from the enforcement of foreign laws. Many people call these efforts the result of paranoia, I call them diligent defense of our liberty.

And all of this is just the beginning;  Lee Bright also co-sponsored legislation to require drug testing for anyone seeking public assistance, co-sponsored the Fair Tax Act, co-sponsored the Agenda 21 Protection Act, and was the primary sponsor of the Second Amendment Protection Act. I could list more bills, but I think I’ve made my point. This voting record speaks volumes and demonstrates a commitment to the Constitution.

I’ve said many times, that I believe “Republicans” like John McCain and Lindsey Graham are a bigger threat to liberty than any Democrat in office. Lindsey Graham has repeatedly demonstrated his commitment to bigger government and less liberty, while all the while proclaiming that he stands for the exact opposite.

Samuel Adams once said, “If ye love wealth better than liberty, the tranquility of servitude better than the animating contest of freedom, go home from us in peace. We ask not your counsels or arms. Crouch down and lick the hands which feed you. May your chains set lightly upon you, and may posterity forget that ye were our countrymen.” Lindsey Graham has shown his willingness to “crouch down and lick the hands” of the current regime, but Lee Bright has shown a passion for the “animating contest of freedom.” I think the choice is clear for patriots in South Carolina.

Benjamin Bracewell is a graduate of Clearwater Christian College and a veteran of two tours in Afghanistan. Currently Benjamin is working with the Sons of Liberty. You can visit their Facebook page at https://www.facebook.com/pages/The-Sons-Of-Liberty/316962018415902