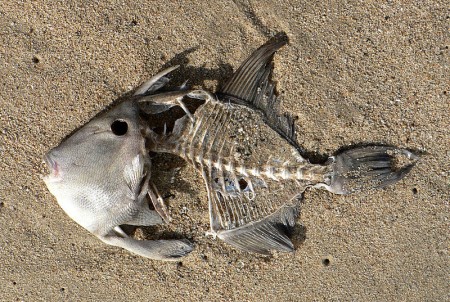 Why is there so much death and disease among sea life living near the west coast of North America right now?  Could the hundreds of tons of highly radioactive water that are being released into the Pacific Ocean from Fukushima every single day have anything to do with it?  When I wrote my last article about Fukushima, I got a lot of heat for being “alarmist” and for supposedly “scaring” people unnecessarily.  I didn’t think that an article about Fukushima would touch such a nerve, but apparently there are some people out there that really do not want anyone writing about this stuff.  Right now, massive numbers of fish and sea creatures are dying in the Pacific Ocean.  In addition, independent tests have shown that significant levels of cesium-137 are in a very high percentage of the fish that are being caught in the Pacific and sold in North America.  Could this have anything to do with the fact that the largest nuclear disaster in the history of mankind has been constantly releasing enormous amounts of radioactive material into the Pacific Ocean for more than two years?  I don’t know about you, but to me this seems to be a question that is worth asking.

Since I wrote my last article, major news outlets have reported that large numbers of sea stars living off of the west coast of North America appear to be “melting“…

Divers were out in Puget Sound waters Saturday to see if they can help solve a mystery. Scientists are trying to figure out what’s causing one species of starfish to die in parts of Puget Sound and the waters off of Canada.

Seattle Aquarium biologists Jeff Christiansen and Joel Hollander suited up in scuba gear in their search for answers.  “We’re going to look for both healthy and potentially diseased sea stars,” Christiansen explained. “We’ve got some sea stars that look like they’re melting on the bottom.”

The same thing is happening in the waters near Canada and nobody’s sure why.

If scientists don’t know why this is happening, perhaps there is an unusual explanation for this phenomenon.

“[The starfish] seem to waste away, ‘deflate’ a little, and then just … disintegrate. The arms just detach, and the central disc falls apart. It seems to happen rapidly, and not just dead animals undergoing decomposition, as I observed single arms clinging to the rock faces, tube feet still moving, with the skin split, gills flapping in the current. I’ve seen single animals in the past looking like this, and the first dive this morning I thought it might be crabbers chopping them up and tossing them off the rocks. Then we did our second dive in an area closed to fishing, and in absolutely amazing numbers. The bottom from about 20 to 50 feet [6 to 15 meters] was absolutely littered with arms, oral discs, tube feet, gonads and gills … it was kind of creepy.”

That certainly does not sound normal to me.

Shouldn’t we be trying to figure out why this is happening?

A Vancouver Aquarium researcher is sounding the alarm over “puzzling” changes he’s observed in the killer whale pods that live off the southern British Columbia coast.

Barrett-Lennard says the southern resident orca pod, which is found in the Salish Sea between Vancouver Island and the B.C. mainland, has lost seven matriarchs over the past two years, and he’s noticed a lack of vocalizations from the normally chatty mammals.

I am just asking the question.

Clearly something unusual is happening to the Pacific.  The following is what one Australian discovered as he journeyed across the Pacific Ocean recently…

What would cause the Pacific Ocean to be “dead”?

When you consider the evidence presented above along with all of the other things that we have learned in recent months, it becomes more than just a little bit alarming.

–Polar bears, seals and walruses along the Alaska coastline are suffering from fur loss and open sores…

At island rookeries off the Southern California coast, 45 percent of the pups born in June have died, said Sharon Melin, a wildlife biologist for the National Marine Fisheries Service based in Seattle. Normally, less than one-third of the pups would die.   It’s gotten so bad in the past two weeks that the National Oceanic and Atmospheric Administration declared an “unusual mortality event.”

–Along the Pacific coast of Canada and the Alaska coastline, the population of sockeye salmon is at a historic low.  Many are blaming Fukushima.

–Something is causing fish all along the west coast of Canada to bleed from their gills, bellies and eyeballs.

–Experts have found very high levels of cesium-137 in plankton living in the waters of the Pacific Ocean between Hawaii and the west coast.

–One test in California found that 15 out of 15 bluefin tuna were contaminated with radiation from Fukushima.

–Back in 2012, the Vancouver Sun reported that cesium-137 was being found in a very high percentage of the fish that Japan was selling to Canada…

Is it really so unreasonable to wonder if Fukushima could be causing all of this?

And the total amount of nuclear material in the Pacific Ocean is constantly increasing.  According to the New York Times, the latest releases from Fukushima contain “much more contaminated water than before”, and the flow of contaminated water will not stop until 2015 at the earliest…

The latest releases appear to be carrying much more contaminated water than before into the Pacific. And that flow may not slow until at least 2015, when an ice wall around the damaged reactors is supposed to be completed.

The magnitude of the recent spike in radiation, and the amounts of groundwater involved, have led Michio Aoyama, an oceanographer at a government research institute who is considered an authority on radiation in the sea, to conclude that radioactive cesium 137 may now be leaking into the Pacific at a rate of about 30 billion becquerels per year, or about three times as high as last year. He estimates that strontium 90 may be entering the Pacific at a similar rate.

Right now, approximately 300 tons of contaminated water is pouring into the Pacific Ocean from Fukushima every 24 hours.

But apparently we are not supposed to ask any questions about this and we are just supposed to blindly accept that this is not having any significant impact on our environment even though sea life in the Pacific appears to be dying in unprecedented numbers.

I don’t know about you, but I really think that the people of the world deserve to know the truth about what is happening out there.