“Don’t do this to me,” said Kathleen Sebelius when she thought she was off-mike…how about ‘don’t do this (ObamaCare) to ‘We the People.’

And so the hearings on the in-trouble ObamaCare website began, as noticeably nervous, fidgety, and obviously NOT wanting to be there, HHS Secretary Kathleen Sebelius yesterday testified before the House Energy and Commerce Committee…the very Committee holding hearings as to the cause and effect of the troubled debut of ObamaCare’s official health care website, Healthcare.gov.

In a carefully orchestrated cacophony of lies, innuendos, and evasiveness fed into by the Democratic party loyalists in attendance…loyalists whose job was to heap praise on this monstrosity of a health care act NO matter what…Sebelius took an oath to tell the truth…the whole truth…and NOTHING but the truth…which of course we all know she did NOT do as she must cover herself (and of course cover for Obama) and her ineptitude as calls for her resignation continue to grow.

Starting off with being asked for the exact numbers of enrollment in the marketplace, Sebelius insisted accurate numbers would not be available until mid-November.

“The numbers that we have now just aren’t reliable. We want to be able to present accurate data,” she croaked…more like we need time to fix and adjust the numbers to meet our agenda…and down it went from there.

Trying to deflect blame off Barack HUSSEIN Obama…actually being his human shield of the kind all good muslims use…and his outright LYING to the American people about their being able to keep their current health plans…“If you like your doctor, you will be able to keep your doctor, period. If you like your health care plan, you’ll be able to keep your health care plan, period. No one will take it away, no matter what”…and despite the 2 million cancellation notices that have already been sent out…with more on the way…Sebelius had the audacity to claim that the Obama White House has kept its promises to the American people.

I don’t think this woman is living on the same planet as the rest of us because what doesn’t she get about 2 million policies to date being cancelled solely because of ObamaCare. And Sebelius even had the gall to claim that it was the insurance companies altering their ‘inadequate’ plans in order to conform with Obamacare as the reason for the cancellations, that insurance companies routinely alter coverage in the individual marketplace, and that people on these plans often hold them for less than a year.

NO…I do NOT think so as the insurance companies are being forced to cancel both long and short-term policy holders because they CANNOT afford to alter their ‘adequate’ plans…plans people are happy with…to add on all the lunacy that is part and parcel of ObamaCare. And it is ObamaCare that drove these cancellations because ObamaCare’s very goal is to drive people into the exchanges, for that is the only way possible for Obama to monetarily sustain the health care system…a system that would collapse under its own weight if private insurance was allowed to stay.

Reading off a prepared statement…and showing NO visible signs of remorse at all…Sebelius said that she regretted that perusing HealthCare.gov has been a “miserably frustrating experience” for many, yet she still continued to bloviate that Obamacare and its website have been working well for millions of Americans, albeit slower than she would have liked. What I’d like to know is who those millions of Americans are as the reality is that most of the few who have been able to sign onto the website have NOT signed up for the ObamaCare exchanges but have signed up for Medicaid… further taxing the already overloaded health care system for poorer and disabled Americans.

And the blame game continued on as Kathleen Sebelius placed blame on everybody for the website’s failures but on its rightful owner…as in her boss Barack HUSSEIN Obama….and doing so with the same smug look on her face that we see time and again on Obama’s face as he blames everybody but himself when anything goes wrong. Trying to dump the website’s problems in the lap of contractor Verizon…blaming Verizon for the server failures while at the same time claiming the server and the site have NEVER crashed…yet another LIE was exposed for early yesterday morning the site went down again and stayed down the entire time she was testifying …in fact it went down for the third time in as many days…showing just how incompetent Kathleen Sebelius is in doing the job she was appointed to do. 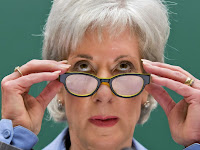 And in Sebelius’ defending of ObamaCare…her own law per se…a law she obviously does NOT understand because when asked if she would sign on to one of the ObamaCare exchanges her reply was that it would be illegal for her to do so. And we could see her nose visibly growing as she took off and put on her glasses for the umpteenth time…for that’s one big LIE…a LIE on the same scope as Obama’s ‘you can keep your health insurance’ LIE. And while it’s NOT illegal for her to sign on her NOT signing on borders on the criminal…to me at least…because what’s good for us common folks should damn well be just as good for those like her who sit in their ivory towers dictating to the rest of us what we can and cannot do.

Bottom line…while this hearing was really just a ‘dog and pony show’ done solely for the cameras, Sebelius and her Democratic cohorts continue to try and herald ObamaCare’s supposed pluses…but truth be told ObamaCare is actually worse than any form of socialized medicine in existence today, because ObamaCare was designing right from the get-go to be a total and complete dismantling our America’s medical system. ObamaCare is NOT about better medicine…is NOT about better medical care…reducing insurance costs…or even about covering the previously uninsured…but is about ObamaCare and its so-called ‘glitches’ being just a diversion so that when it dies after a very theatrical played for maximum affect death…Barack HUSSEIN Obama can then implement what was his always wanted goal…to implement a single payer system of health care…meaning Medicaid for everyone…and he could care less that it will be we taxpayers who will shoulder the burden of its cost.

And while Kathleen Sebelius told the Committee, “Let me say directly to these Americans: You deserve better. I apologize. I’m accountable to you for fixing these problems…Hold me accountable for the debacle. I’m responsible,” the truth is that as president the blame is the ultimate responsibility of Barack HUSSEIN Obama to take and no one else…and a real man and real president would do just that.