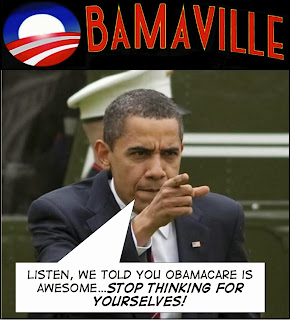 SIX…the number of people who signed onto ObamaCare on October 1…the first day the ObamaCare website was up and running…the day the White House said that by the end of the month 500,000 would sign up.

SIX… For a month now Obama and his mouthpieces have been bloviating that Americans by the droves are visiting, shopping, and purchasing health insurance through the exchanges on Healthcare.gov in spite of all its problems…visiting a website that does NOTHING but expound the highest tax increase in the history of this country.

But truth be told…the Obama administration out-and-out LIED…so what else is new…saying there were 4.7 million visits in the first 24 hours of operation.  But in response to a document request to HHS from the House Oversight Committee (the Obama administration to date had refused to provide information on how many people had actually enrolled) notes secured from the twice-a-day ‘war room’ meetings within the Centers for Medicare and Medicaid Services  showed that only “six enrollments have occurred so far.”

A laughable SIX people signed up for Barack HUSSEIN Obama’s hallmark piece of legislation on day one…by the afternoon of day two enrollments reached 100…and by the end of day three, the ‘war room’ notes show 248 enrollments nationwide. A mere 248 enrollments when ObamaCare needs an average of 39,000 enrollments per day to meet the goal of seven million by March 1st.  And the majority of that 248…in fact 9 out of 10…did NOT purchase private insurance the exchanges offered but instead applied for Medicaid.  And why Medicaid…because the federal government foots the entire bill for those newly eligible individuals under the expanded Medicaid law…and that translates into ‘We the People’ getting shafted once again as it’s our taxpayer dollars that foots the bill for the federal government.

And so ObamaCare allows the ‘sponges’ of our society to win yet again for the bottom line is that ObamaCare exists simply to lock-in oh so grateful current and future Democratic voters. Remember, the ‘sponges’ already had free access to the ER as their primary source of health care, and now under ObamaCare the few that do NOT go into the expanded Medicaid program will get subsidies to pay for ObamaCare…again giving them free health care at the expense of we taxpayers.

In other words…redistribution of wealth has now become a reality under this miserable excuse of a president and his equally miserable namesake health care law.

And it gets worse for ‘We the People’ for NOT only are we taxpayers having our wealth redistributed but millions of us are getting a ‘very special gift’ because of ObamaCare… higher policy costs if NOT outright policy cancellations of our ‘very happy with’ health insurance…you know the insurance Obama has been saying all this time that “if you’re happy with your insurance you can keep it, period” insurance.

And as 2+ million Americans have already lost their current insurance with that number growing daily (Obama alone owns that), Obama does what he does best…he hightails it out of DC and goes into full ‘campaign mode’ to do damage control.

Saying in Boston that the insurance plans being cancelled were inferior to the exchange plans in ObamaCare, the reality is that those plans did NOT make everyone pay for things like pregnancy, mental health, and/or drug and alcohol abuse. Remember, in a private plan you have a choice as to whether or NOT you want those benefits…you get to say NO thank you…but under ObamaCare you must have them whether you want them or NOT.  I guess men will thank Obama for that the next time one of them goes into labor.

But karma does have a way of coming full circle as now adding to Obama’s ‘number 6’ woes, Quality Software Services, Inc. (QSSI)…the contractor who is supposed to fix the joke of a website…was labeled ‘high’ risk in a recent federal investigation, having been previously charged with endangering the personal data of more than six million government beneficiaries through insufficient security controls that failed to stop its employees from connecting unauthorized USB devices to highly sensitive Medicare systems.

And yet they are the ones chosen to ‘fix’ the hopefully unfixable website…probably more classmates of Michelle’s are on their board I would guess.

So as Barack HUSSEIN Obama paces the floor over the number 6 …as he tries to dream up even more ways to blame the Republicans for the ObamaCare failures…all I can say is that it could NOT have happened to a nicer guy…insert sarcasm and a hearty laugh here.