This is coming to a mosque near you if it has not arrived already. Women are not equal in Islam and it’s not even debatable. They answer to their husband.

Maulana Zaki Baqri is not just an Imam at a local mosque. He has written a book on marriage and is considered an expert in the field.

Maulana Zaki Baqri is the resident Alim of the Council Of Islamic Guidance located in Pickering Ontario. His status mandates that he provide guidance to the Shia community. 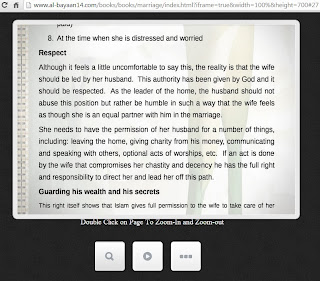 From his web site, he offers the following advice on the role of women in marriage from his handy guide – “Marriage is a gift of God” by Maulana Mohammad Syed Zaki Baqri:

“She needs to have the permission of her husband for a number of things, including, leaving the home…communicating and speaking with others…”

No need for the feminists to despair however, Zaki states that though it s a little uncomfortable to say these things it’s important to do it in such a way that your wife is conned into thinking she is an equal partner.

I think we need to look at some of the reasons that Islam is the fastest growing religion on the planet. My belief is that it is entirely about the breakdown of the moral code throughout humanity. If a man wants to live immorally then he simply converts to a religion that allows him to have his way with children, treat his wife as private property and kill his enemies — all with a clear conscience.

Open your eyes. Our prisons are full of Muslim converts.