The forensic tests on samples taken from Yasser Arafat’s corpse by a team of Swiss scientists exhibit high levels of radioactive polonium-210.  The exhumation of his body was implemented in November 2012. The samples revealed “levels of polonium at least 18 times higher than usual in Arafat’s ribs, pelvis and in soil that absorbed his bodily fluids.”

These developments raise the broader issue which the media has failed to address: Who was behind the assassination of Yasser Arafat? The Answer to that question was provided by the Israeli government in 2003, a year prior to his death.

“We will choose the right way and the right time to kill Arafat.”

In September 2003, Israel’s government passed a law to get rid of Arafat. Israel’s cabinet for political security affairs declared it “a decision to remove Arafat as an obstacle to peace.” 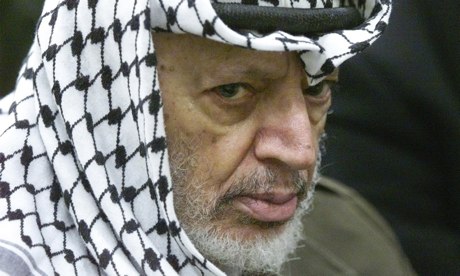 The 2004 assassination of  Yasser Arafat was part of a broader military and intelligence agenda to destroy the Palestinian Authority.

What recent news reports fail to mention is that the extra-judicial assassination had been ordered by the Israeli cabinet in 2003. It was subsequently approved by the US which vetoed a United Nations Security Resolution condemning the 2003 Israeli Cabinet decision to “get rid of Arafat”.

The assassination of Yasser Arafat had been on the drawing board since 1996 under “Operation Fields of Thorns”.

According to an October 2000 document “prepared by the [Israeli] security services, at the request of then Prime Minister Ehud Barak, stated that ‘Arafat, the person, is a severe threat to the security of the state [of Israel] and the damage which will result from his disappearance is less than the damage caused by his existence’”. (quoted in Tanya Reinhart, Evil Unleashed, Israel’s move to destroy the Palestinian Authority is a calculated plan, long in the making, Global Research, December 2001. Details of the document were published in Ma’ariv, July 6, 2001.).

In August 2003, Israeli Defense Minister Shaul Mofaz declared “all out war” on the militants whom he vowed “marked for death.”

“In mid September, Israel’s government passed a law to get rid of Arafat.Israel’s cabinet for political security affairs declared it “a decision to remove Arafat as an obstacle to peace.” Mofaz threatened; “we will choose the right way and the right time to kill Arafat.” Palestinian Minister Saeb Erekat told CNN he thought Arafat was the next target. CNN asked Sharon spokesman Ra’anan Gissan if the vote meant expulsion of Arafat. Gissan clarified; “It doesn’t mean that. The Cabinet has today resolved to remove this obstacle. The time, the method, the ways by which this will take place will be decided separately, and the security services will monitor the situation and make the recommendation about proper action.” (See Trish Shuh, Road Map for a Decease Plan,  www.mehrnews.com November 9 2005)

The assassination of Arafat was part of the 2001 Dagan Plan.

In all likelihood, it was carried out by Israeli Intelligence.

The above text was written in January 2009 as part of the following article: