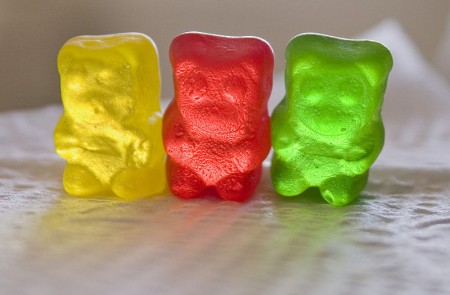 That is a really crazy headline, right?  Unfortunately, it is not a joke.  Right now, gelatin made with human DNA fragments is already being used in pharmaceutical drugs and vaccines, and scientists believe that recent breakthroughs will soon make it economically feasible to use such gelatin in consumer products such as gummy bears and marshmallows on a massive scale.  So are you ready for gummy bears made out of people?  They are coming.  And this is just the tip of the iceberg.  As you will read about below, scientists have also combined human DNA with mice, rabbits, goats, pigs, sheep and cows.  We have arrived at a time in human history when advances in technology have opened the door to a lot of things that were once considered to be impossible, and scientists are having a field day.  But in the end, where will all of this technology end up taking us?

Most people would never even imagine that the gummy bears that they are eating could potentially contain human DNA.

Well, from now on you might want to check, particularly if those gummy bears come from China.  The following is an excerpt from a recent io9 article…

In 2011, scientists in Beijing reported on a method of creating large amounts of gelatin by inserting human DNA fragments into yeast. Human DNA-derived gelatin has actually been in use for a while, in vaccine preparation and the gel caps that many over the counter drugs come in. This method created such large quantities of gelatin that it would be practical to use it for more common consumer goods like candy and baking supplies.

This is actually a brilliant breakthrough, because it avoids a whole lot of problems inherent in “natural” gelatin production. It’s incredibly difficult to get consistent results when manufacturing gelatin, and consistency is very important with vaccines. Because gelatin is derived from animal by-products, it can cause allergic reactions or be off limits to people with ethical or religious reasons for avoiding animal products.

Who wants to eat human DNA?

Certainly not me.  I have no plans to be a cannibal.

Unfortunately, millions of Americans are already getting human DNA in their pharmaceutical drugs and their vaccines…

In fact, human-derived gelatin is already in use by the pharmaceutical industry in the manufacture of certain pills and vaccines. The highly controlled production techniques of the laboratory offer a more consistent product than “traditional” gelatin, which is made from the bones and skin of pigs and cows.

Do you know what is in the pills that you are taking?

You might be eating people right now without even knowing it.

And guess what?  Some genetically-modified crops contain human DNA as well.  The following comes from a recent Natural News article…

Unless the rice you buy is certified organic, or comes specifically from a farm that tests its rice crops for genetically modified (GM) traits, you could be eating rice tainted with actual human genes. The only known GMO with inbred human traits in cultivation today, a GM rice product made by biotechnology company Ventria Bioscience is currently being grown on 3,200 acres in Junction City, Kansas — and possibly elsewhere — and most people have no idea about it.

Since about 2006, Ventria has been quietly cultivating rice that has been genetically modified (GM) with genes from the human liver for the purpose of taking the artificial proteins produced by this “Frankenrice” and using them in pharmaceuticals.

Are you sickened by that?

Not only is it becoming more common for scientists to use human DNA in very bizarre ways, thanks to a recent breakthrough it will now be much easier for them to modify and change human DNA.  The Independent is reporting that a technique known as “Crispr” will now allow scientists to very accurately rewrite the DNA of specific individuals without danger of flaws and mistakes…

For the first time, scientists are able to engineer any part of the human genome with extreme precision using a revolutionary new technique called Crispr, which has been likened to editing the individual letters on any chosen page of an encyclopedia without creating spelling mistakes. The landmark development means it is now possible to make the most accurate and detailed alterations to any specific position on the DNA of the 23 pairs of human chromosomes without introducing unintended mutations or flaws, scientists said.

The technique is so accurate that scientists believe it will soon be used in gene-therapy trials on humans to treat incurable viruses such as HIV or currently untreatable genetic disorders such as Huntington’s disease. It might also be used controversially to correct gene defects in human IVF embryos, scientists said.

Of course this technology will be heralded as a way to cure diseases, but there are countless other applications for this technology and scientists are absolutely giddy about what they could potentially do with this new tool…

“The efficiency and ease of use is completely unprecedented. I’m jumping out of my skin with excitement,” said George Church, a geneticist at Harvard University who led one of the teams that used Crispr to edit the human genome for the first time.

Would you like to have “super powers” that no other human has had before?

This technology will open up the door for scientists to create entirely new races of “super humans” and human/animal hybrids.  And once the genie is out of the bottle, it will be nearly impossible to get it back again.

And of course scientists all over the world have already been creating bizarre human/animal hybrids for quite some time now.  The following is an excerpt from one of my previous articles…

Are you disgusted by those examples?

And these are just the things that we know about.

So what is coming next?

Well, according to a new exhibition entitled “GROW YOUR OWN” at Science Gallery in Dublin, Ireland we could see some extremely bizarre things in the years ahead…

Cheese made with bacteria from a human armpit? An ‘Elvis mouse’ with DNA from the king of rock and roll? Humans giving birth to dolphins? GROW YOUR OWN at Science Gallery has plenty to leave you scratching your head (and possibly holding your nose). The exhibition, which opened last week, explores the weird and often wonderful world of synthetic biology (or synbio), an emerging field that looks to apply engineering to biology to come up with ‘parts’ that can be used to design solutions, much like you would engineer a circuit or programme software.

Perhaps the most shocking part of the exhibition is a display named “I Wanna Deliver a Dolphin“.  The following is how this display is described…

I Wanna Deliver a Dolphin… imagines a point in the future, where humans will help this species by the advanced technology of synthetic biology. A ‘dolp-human placenta’ that allows a human female to deliver a dolphin is created, and thus humans can become a surrogate mother to endangered species. Furthermore, gourmets would be able to enjoy the luxury of eating a rare animal: an animal made by their own body, raising questions of the ownership of rare animal life, and life itself.

If you want to check this sickening display out, you can find it right here.

So what do you think about all of this technology?  Please feel free to share your feelings by posting a comment below…