Hindu beauty Karishma Dhanak was alive when her throat was slit and her body was set alight. Her father suffered 29 stab wounds to his body. Her mother was stabbed in the stomach and had her throat slashed,  but made it out alive and lived to testify.

Muslim killer Iftekhar Murtaza yelled out while she testified about how he and another man grabbed her and slit her throat, said prosecutor Howard Gundy. The jihad doesn’t stop, not even in the courtroom.

‘I still hear him screaming’: Mother testifies about terrifying final moments when she saw her husband and child slaughtered ‘by her daughter’s ex-boyfriend who they disapproved of because he was Muslim Daily Mail, November 7 (thanks to CGW)

A sobbing mother recounted for California jurors Thursday the final horror-filled moments before her husband and elder daughter were murdered in their home at the hands of an acquaintance six years ago.

Leela Dhanak broke down on the stand as she talked about still hearing her spouse’s screams of terror in her sleep years later.

Under cross-examination, Mrs Dhanak told the Orange County courtroom that she was attacked when she came home in May 2007 and fell unconscious. 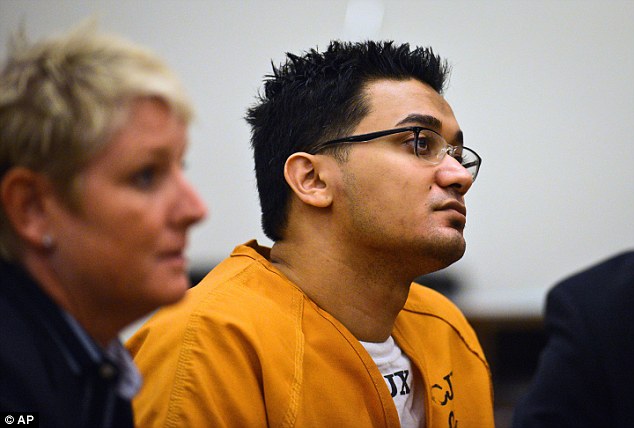 Alleged killer: Leela Dhanak testified how Iftekhar Murtaza, seen in this August photo, murdered her husband and elder daughter in a failed attempt to win over her younger daughter

The woman woke up from a coma three weeks later to discover the family’s Anaheim Hills mansion had been burned, and her husband, 56-year-old Jaypraykash Dhanak, and elder daughter, Karishma Dhanak, 20, killed.

Last month, a pathologist testified that Karishma Dhanak was alive when  her throat was slit and her body was doused with gasoline and set on fire.

Autopsy results showed Jayprakash Dhanak suffered 29 stab wounds to his body. He also had his skull fractured, resulting in a fatal brain injury, according to Orange County Register.

The man was dead by the time his was set alight, according to the medical examiner’s testimony.

His wife, Leela Dhanak, was stabbed in the stomach and had her throat slashed, but she survived after police found her lying unconscious on her neighbor’s lawn.

‘I do hear him screaming, crying. In my sleep I do hear,’ Dhanak testified during the trial of her younger daughter’s ex-boyfriend Iftekhar Murtaza on charges of carrying out the fatal attack. 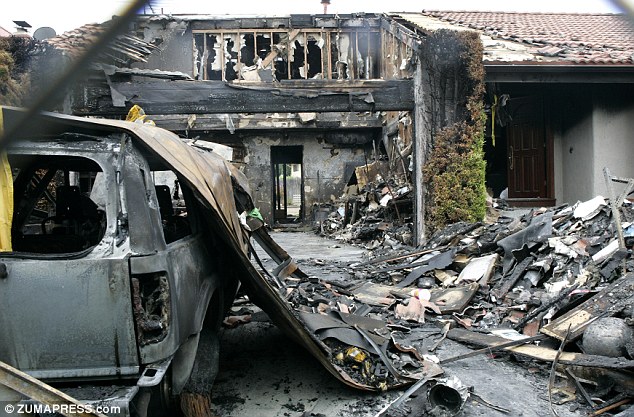 Inferno: This is all that was left of the Dhanka family’s mansion in Anaheim Hills, California, which was burned down after becoming the scene of a double homicide Bloodbath: Autopsy showed Jayprakash Dhanak (left) suffered 29 stab wounds to his body, while a pathologist testified that Karishma Dhanak (right) was alive when her throat was slit and her body was set alight 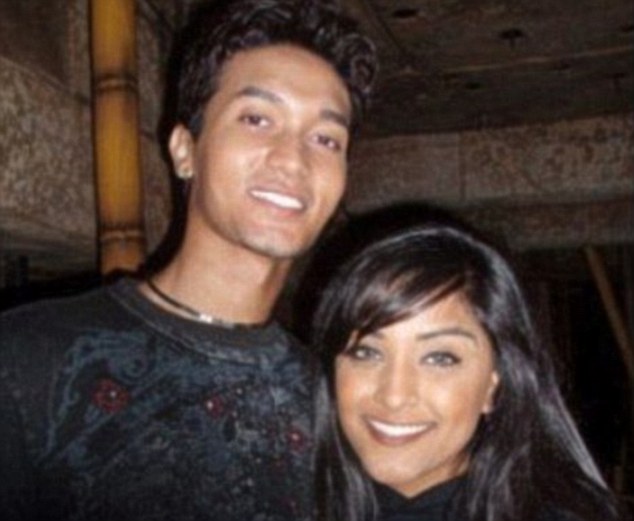 Delusional: Prosecutors said urtaza was hoping that after the attack, his ex-girlfriend would see him as a “white knight” and come back to him

She then lost her composure, reached for a tissue, and the court took an early recess for lunch.

[….]Shayona blamed their breakup on differences between her Hindu family and his Muslim faith.

Murtaza is charged with two counts of murder with special circumstances of burglary and kidnapping, attempted murder and conspiracy. If convicted, he could face the death penalty.

Two of Murtaza’s friends have been convicted in the killings and one of them has been sentenced to life in prison.

Orange County Superior Court Judge Thomas M. Goethals on Thursday reprimanded Murtaza for speaking out during Dhanak’s testimony and warned he might be removed from the courtroom if it happened again.

Murtaza had refuted Dhanak’s account, yelling out ‘that’s not what happened!’ while she testified about how he and another man grabbed her and slit her throat, said prosecutor Howard Gundy.

Dhanak later conceded her memory of exactly what happened during the attack has varied since the incident.

The widow told the court her younger daughter had dated Murtaza but told her she didn’t have deep feelings for him.

As a mother, she said she wished her daughter had dated someone of Indian heritage, like her family, but above all wanted her to concentrate on her studies at University of California at Irvine.

Dhanak said she didn’t particularly like Murtaza, but had her daughter truly loved him, she would have supported the young couple.

‘She was too young to fall in love with any guys,’ she told the court.