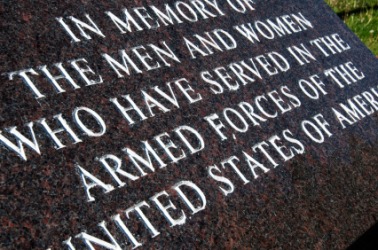 I had a casual acquaintance who answered the call of his country for Operation Desert Storm. He and I took different paths at that time. While he was preparing to give all to defend my right to do it, I was busy making my first million dollars. I barely knew this young man at the time, but I admired his conviction. I was selfish in my pursuits. I chased the “American Dream” while he fought to defend it.

Many years later we were both arguably on the losing end. I did make my first million but quickly lost it and everything I owned due to a business failure but he lost so much more.

No, he was not killed. Though he often times wishes he was. Those are his words, not mine. What happened to this young man was likely worse than death on the battlefield. He lost his very mind.

After he got back from Iraq things seemed to be going well for him. He got a really good job, got married and started a family. But it didn’t last.

A few years after he returned I learned of his story through my wife. Her friend was married to Bob (not his real name) and she could not deal with the horror of things that Bob was confiding in her. My wife couldn’t deal with it either so she told me. I can’t give you the specifics because it is highly likely that I would be leaking some sort of classified information. I do not want trouble for Bob or anyone else who has selflessly served this country.

What I will say is this. We have printed stories on The D.C. Clothesline that ended up being fairly big stories that would not touch the story of what Bob saw and did in Iraq.

You see, the things he was ordered to do would be enough to scar anyone. Some would call these unconstitutional orders or even war crimes.

Many would say that it was his fault for following those orders but he was like most 19 year old kids in the military. He followed orders. I think we tend to forget that a lot of our vets are like Bob. They did things in the heat of battle that they may come to regret many years later. I can not judge him or anyone else because I don’t know what it’s like to be in that situation. Anyone can say what they would have done but until you are there you really don’t know.

I doubt there is a person on this earth that would have come out of his situation with a clear head. The guilt and the memories may haunt him for the rest of his life. It seems like the farther he got from Iraq, the more Iraq followed him. It has been a downward spiral.

At first he was flying high with a beautiful wife, wonderful job and a nice home. He seemed to have it all.

Many years later he has lost more than just his mind. He lost his loving wife and children through a divorce because they simply could not live with a man who spent so much of his life buried in a past that would haunt anyone.

He did not lose his life on those battlefields, but then again he did.

Bob gave all and has nothing to show for his sacrifice. He is now a chronic alcoholic who lives between psychotic episodes due to severe mental issues. He has flashbacks. He doesn’t understand where he is on some days. He has more than once talked about ending his own life and he has done things totally out of character in regard to his own family. He loves his ex-wife and children. He simply can no longer function as most of us do. He is that far gone.

I tried to help him at one point by taking him to a few AA meetings but it simply didn’t take. There are some things in this world that I believe are too big for me. Those things are best left up to God. Bob didn’t respond to AA. I guess when he heard people complaining about losing jobs and arguing with girlfriends he could not relate. In Bob’s mind there are few people who can relate to him.

These people were complaining about how they had to drink to avoid back pain and Bob has seen the horror of DEATH and not just at the end of his rifle but beside him as well. He may never recover from the guilt and if I get a call someday telling me that he decided to end it, it would not surprise me.

Usually on these holidays (Memorial Day, Independence Day and Veteran’s Day) I tend to write a tribute that is meant to be a bit of a pump up. The thing is that “Tribute to Veteran’s Day” tends to get about as many readers as a small town local newspaper so today I am just going to write what I want. It is still a tribute but in a different sort of way.

There is no doubt that many give their lives for this country on the field of battle.

Others come home without limbs, with horrific burns or any other variety of physical trauma that they will live with for a lifetime.

But we sometimes forget about those who have given all in a different way.

When the mind is gone it is very hard to get back and that can cause a variety of other dominoes to fall in one’s life. Bob still has his job though many around him wonder how he does. Maybe there is someone looking out for him that understands what he has been through. If that is the case then I can live with it. He deserves something and needs something to give him a reason to get out of bed each day. But that job is about all he has left.

He now lives from bottle to bottle and rarely sees his kids due to some outbursts he has had in the past.

He goes to a local church but it is my understanding that he has caused disruptions there as well. My biggest prayer is that he sees his reward in the next world because I honestly don’t see him being happy in this world.

We don’t give up on people and he has not given up entirely on himself.

But again… If the mind is no longer functioning correctly then how much can really be done? He may be in counseling for years and never have any breakthroughs.

It’s easy for me or anyone else to tell him to pick himself up or to say it’s his fault, or whatever. I don’t want to go there. It is not mine to judge. I don’t know what it is like to walk in his shoes and very few do.

What I want to tell you is that I owe everything I have to guys like Bob. While I was selfishly making and losing my first, and only, million dollars he risked everything for people like ME.

He gave all so that people like ME would have a chance.

I like to say that I owe everything I have to God and the American Veteran and I mean it.

But saying we are grateful is not gratitude. Gratitude is an action word. I can say that I am grateful for my car, but an act of gratitude is to wash and wax that car or get new tires for it.

We only show how grateful we are when we take action. Today I’d like to ask you to say a prayer for people like “Bob” because there are many like him. We have a Vietnam Vet that lives about a block away that screams violently at all hours of the day and night. People dismiss him as crazy but I am sure he has a story as well.

Beyond that I would ask you to give a little if you can to help a veteran. If you don’t have money or time then simply do something small. Shake their hands and say “thank you” whenever the opportunity arises. There is no one that deserves my respect more than someone who put their life on the line for me.

I know how hectic things can be and I know that even $5 or five minutes can be tough to spare.

But imagine what we could do if we all gave some for those who gave all.

Today I’d challenge you to take that “attitude of gratitude” and be proud to be an American. Never forget where your freedoms came from.

Try to remember that it’s not just those who are remembered with flags and headstones that gave all to make this country great. Some of them, like my friend Bob are still walking among us.

I’d love to write someday about how I asked a lot of people to pray for him and a miracle happened in his life. I believe that it’s possible. But if he never comes out of it he is not a sub-human who should be looked at as the crazy guy in the neighborhood.

Bob is an American hero and deserves our gratitude and respect.