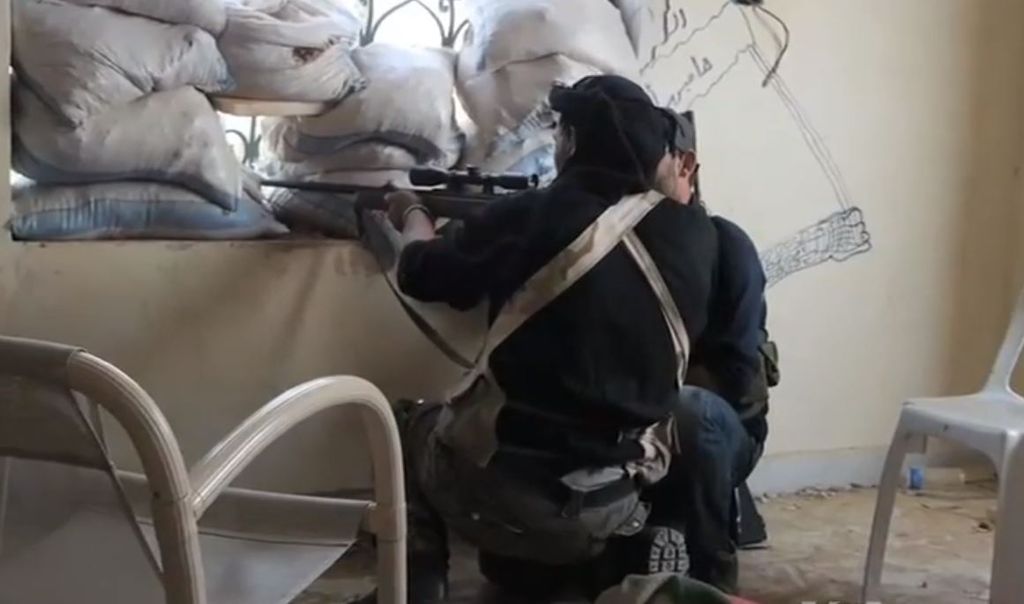 Islamic Jihad demands fighting for the cause. With Islam converts rising at levels never seen before in the United Kingdom and across Europe, the next step is jihad. In direct proof that there is no moderate Islam, British nationals posted a video of British al-Qaeda jihadis in Syria, fighting alongside Al-Qaeda rebels. With their faces covered, the identities of the men are not known. More likely than not, they are young university educated Muslims, and they’re Al-Qaeda Islamic terrorists now, threatening Americans. When a Muslims says, “We Will Bleed You To Death,” they will surely follow through.

British Al Qaeda Jihadis in Syria just made the ultimate threat against Americans: The promise to bleed, to hack, and to kill the infidels. These are commandments in the Quran. They are waging war with their fellow Islamic jihadists in arms. Conversion to Islam knows no boundaries. British nationals, Americans, and other Europeans are converting to Islam in record numbers. The Islamization of the UK is especially troubling, as the UK aims to become the center for Islamic finance. Soon, Britain will be the capital in an Islamic dominated world.

The word Muslim is not a title or identity of a community, nation or country. It is not nationalistic or political philosophy. In Arabic language, it only means “who or what is natural and truthful, honest, realistic, consciously aware, enlightened with knowledge and that is Islam”.

This is precisely accurate. The word Muslim does not dictate one community, nationality, or ethnic identity. It is an adherence to the Quran, the war manual for all followers of Islam. This is the enlightened knowledge of Islam. The same goes for the Bible and Christianity. You cannot separate one without the other.

That is why moderate Islam is a myth. One is either practicing Islam or not, and practicing British jihadists have taken their cause to Syria to fight alongside their Al-Qaeda counterparts. After the mission in Syria is complete, the next war is with the United States. This is a cleansing of those who do not adhere to Islam.

Vice News posted video with interviews of British men who traveled to the combat zone to pair up with the jihadi groups Jabhat al-Nusra (Nusra Front) and the Islamic State of Iraq and Syria (ISIS).

“I say to United States that your time will come and we will bleed you to death and, inshallah [Allah willing], will raise the flag in the White House,” a 26-year-old Briton told the Vice News interviewer.

“My feeling is great, hamdullallah (thank Allah), I’m happy I’m here. And I’m here to please Allah… and I’m not here to please anyone else but Allah,” he added, describing his aim as contributing to jihad on behalf of Muslims.

Kill the infidels. It’s a command. Those who believe in the cause of “Allah” must fight, and die if necessary. It’s not a suggestion, it’s a commandment.

The Quran contains 109 verses for believers to wage war against nonbelievers. That would include Jews, Christians, and Americans. Anyone who does not adhere to Islam is an enemy and must be destroyed. Thus, the British fighters in Syria are extracting revenge. One fighter cited crimes against Muslims in the UK and for UK forces serving in the Middle East as reason for jihad. The irony is that the British government is turning to Sharia, and all the while British fighters in Syria are in a death battle against the UK government and the U.S. This is an ideological war with no end in sight.

After Syria, the aim is “to bring back the honor of Islam from Filastine [Palestine] to Al Aqsa to all over the Muslim world, and Britain will be next,” said one of the British jihadis.

“From this land we will march toward the Al Aqsa mosque [in Jerusalem] in the name of Allah. Allahu Akbar! [Allah is the greatest],” said another.

“Allau Akbar!” is what is shouted before waging jihad. Islamic jihadists Nidal Malik Hasan shouted this proclamation at Ft. Hood Texas before his murder spree on November 5, 2009. This is just one example of hundreds, if not thousands of others. This is a declaration of war against all who do not adhere to Islam. The war is crossing all borders. The British Al Qaeda jihadis fighting in Syria are but one example of this phenomenon.

The head of domestic intelligence for Britain’s MI5 intelligence agency, Andrew Parker, last week estimated that the number of British Al Qaeda sympathizers in Syria at in the “low hundreds.”

“We’ve seen low hundreds of people from this country go to Syria for periods and come back – some large numbers are still there – and get involved in fighting,” Parker said.

This is true, but Britain has submitted to Islam. Why was this not expected? With Islam virtually taking over the country, it is only natural that those who adhere to Islam would join the jihad. It is too late for the UK. They’ve already submitted to Sharia. However, this isn’t enough. In their ignorance to the truth about Islam, they’ll be met with slaughter, and so will the United States. The aim is to kill. “We Will Bleed You To Death” is no idle threat. It is a call to convert or die, and those who do not adhere to Islam will die or war against it.

My name is Janna Brock and I’m a a staunch Christian conservative. I am interested in the infiltration of Islam, the homosexual agenda, and the general eroding of civil liberties that are occurring in America today. All freedom loving Americans have to stand up for truth.