Tsk, tsk…the media anointed ‘savior’ of us all is nervous…very very nervous as the fallout from NOT only the disaster of the ObamaCare website roll-out hits home, but also because he’s now facing the ire of millions upon millions of Americans getting their ‘once happy with’ health insurance policies cancelled after being promised that they would be able to keep them. And add in that now infamous apology that was anything but…I mean an apology for getting caught does NOT equate to an apology for one of the worst laws…one of the highest taxes…ever to be imposed on ‘We the People’…and you have one very nervous and very unhappy man.

And now…and rightfully so…the credibility, competence, and above all else the honesty of the Obama presidency is being called into question all across America, with the oh so deserved fallout being that his job approval ratings are tanking fast…tanking as his numbers hit an all time low…falling into the mid to upper 30% range depending on whose poll you use. 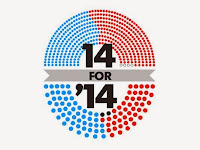 But NOTHING makes our supposed ‘savior’ more nervous than the fact that come November 2014 all 435 House seats and 33 of the 100 Senate seats…including 21 now held by Democrats (with 5 incumbent Democrats retiring)…are up for grabs. Up for grabs while Barack HUSSEIN Obama’s own Democratic Party is starting to turn on him and distance themselves from both him and his namesake of a health care law.

So with Republicans doing the proverbial ‘happy dance’ as they’re coming out on top after the ObamaCare fiasco…a fiasco they have been warning the public about for years…and even after having been erroneously blamed for the recent government shutdown and for failing to defund ObamaCare outright during the last session of Congress…they now have a great chance of…if they play their cards right and continue to keep the issue of ObamaCare’s failures and Obama’s big LIE in the forefront of the news…NOT only keeping the House but taking back the Senate as well…thus rendering Barack HUSSEIN Obama politically impotent as his ‘lame duck’ presidency becomes his well deserved dreaded reality. And as an added bonus the Republicans could finally send ‘Prince’ Harry Reid, his Botox Queen Nancy Pelosi, and Obama’s Congressional little lapdog Debby Wasserman Schultz packing.

The Democrats know this even though they’re NOT actually admitting it…at least NOT in the media. But above all else they know ObamaCare is their political death knell so much so that some of their own…like Mary Landrieu of Louisiana who this week will introduce legislation calling for Obama to make good on his promise that those who like their policies can keep their policies and Senator Joe Manchin of West Virginia who is working on a measure to put off the requirement for everyone to obtain insurance for a year by delaying the fine for non-compliance…are now jumping off the ObamaCare sinking ship and joining with Republicans in calling for its delay, especially of the individual mandate section which to date Obama seems NOT willing to compromise on.

However, being caught in the mother of all LIES…a LIE he cannot LIE his way out of…just might give Obama pause to reconsider his stubbornness in that matter…that is if he can put his narcissism and political posturing aside for a bit and stop his mouthpiece Jay Carney from saying ridiculous statements such as, “Every one of the Democrats who voted for this and believed in it and fought for it, and with the president, defended it against the constant assault by Republicans and outside opponents, continue to believe in it, and believe it’s the right thing to do”…maybe then he can see that ObamaCare needs some major overhauls if it is to succeed at all, otherwise it will surely implode from within.

And why…because even reconsidering the individual mandate does NOT alleviate the fact that ObamaCare’s main premise is fundamentally flawed and monetarily unsustainable for ObamaCare’s success relies solely on the participation of young people carrying the load for older Americans. Healthy young people do NOT have ‘throw away’ money to buy health insurance they most likely will NOT use strictly to support NOT only said older Americans…the ones who actually need insurance…but also to carry the burden ‘the sponges’ of our society place on our current health care system. 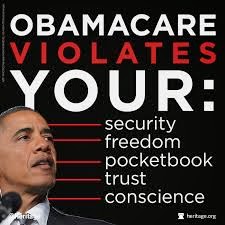 Most young working people are smart enough to know that ObamaCare is the straw that will break their financial backs.

And they’re NOT only smart enough to know the financial pitfalls of ObamaCare and how it affects their wallets, but they’re also techno-savvy enough to know that a website costing six-figure millions+ of our taxpayer dollars to create that fails on day one signals further problems down the road with the concept and the program itself…problems that can and most likely will implode ObamaCare from within in a matter of time.

Problems like what happens when only the sickest Americans go into the ObamaCare exchanges (remember they cannot be turned down), with the cause and effect being that the number of claims and the cost of each claim will rise, and in turn premiums will have to be raised on the healthy young people who are funding the program to begin with.

NOT good…NOT good at all for the young healthy Americans who might have once considered signing onto ObamaCare will NO longer do so for as those who buy into the exchanges become older, sicker, and more expensive to carry, many carriers will leave ObamaCare altogether…leave because only the sickest who cannot afford to go elsewhere and those who get subsidies will sign on, and that scenario CANNOT monetarily sustain ObamaCare for very long.

So as we lead up to the 2014 mid-terms…the sad reality of facts and numbers that tell the truth about ObamaCare might just be the thing that turns the Senate back red…that is as long as the Republicans do NOT let Obama’s BIG LIE go to waste. And while folks continue to be nervous that they’ll be the next one to get an insurance cancellation notice in their mailboxes, guess what our miserable excuse of a president has been doing…jetting off to Florida for a weekend of golf when he should have been working on a way to get those cancelled back their policies…after all he said he was going to work on it during his apology ‘song and dance’ routine.

But then again that was a LIE too.