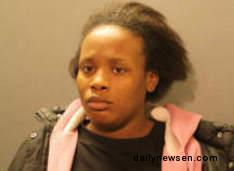 In Chicago, 82 year old Isaac Tucker was trying to be a good Samaritan and help a stranded passenger in need. But what he got instead was a brutal beating. And not just a beating. Isaac Tucker was attacked by the motorist, 28-year-old Sophia Body, and another unidentified woman for accidentally bumping her with his car when he pulled over to help. And for this accidental tapping, he got attacked with a screwdriver. She simply said, “Yeah, I pulled his a– out of the car and beat the f— out of him

82 year old Isaac Tucker was just trying to do the right thing. Who knew that the woman he was trying to help would beat him within an inch of his life.

A 28-year-old Chicago woman is being held on $2 million bail after being accused of dragging an 82-year-old man out of his car and beating him after a traffic accident Thursday night on the South Side, police said.

Sophia Body, of the 8100 block of South Maryland Avenue, was charged with attempted murder and aggravated battery of a senior citizen, police said.

How did this happen when the man in question was trying to help a woman who was stranded after an accident? This makes no sense. But when what actually transpired was made known, there is no way that the kind man trying to lend a hand could have known the evil that is Sophia Body.

What happened to Isaac Tucker? Tucker said he was “flagged down” by two motorists in the neighborhood of Grand Crossing in Chicago after the incident. There was another woman, a 38 year old who has yet to be identified, and has not been charged.

With this alleged, and obviously accidental tapping, if it occurred at all, Mr. Tucker was ambushed. And what happened to him is nothing short of being attacked by two caged animals.

The man said after he parked to help them, he was “pulled out” of the vehicle and struck in the head and body several times by the women, police said. Some of the injuries were caused by a screwdriver.

“Next thing I know I got a punch,” Tucker said.

(Assistant State Attorney Elizabeth) Dibler said the women pulled Tucker out of his car and began to kick and punch him. She said the beating lasted about 10 minutes.

“I was stabbed several times in the back and stomped and everything else,” Tucker said.

He said he fell unconscious and woke up in the ambulance. He’d been stabbed in the head multiple times, Dibler said, and when police found him he was bleeding from the right side of his head and had lacerations on his upper and lower back.

Does it get any colder than this? An elderly gentleman trying to do the right thing gets brutalized by two women he was trying to help. Have people lost all sense of themselves, of what it means to be grateful and appreciative? They flagged him down for help, not the other way around. He was trying to come to their aid. And in their rage over something that is absolutely accidental, they flipped. But Ms. Body’s reaction to the incident is even more bone chilling.

Police recovered a yellow screwdriver they believe Tucker was stabbed with, according to the Sun-Times. The senior citizen was later listed in stable condition at a local hospital.

“Yeah, I pulled his a** out of the car and beat the f*** out of him,” 38-year-old body said of the incident, according to the police report (redacted).

This was all she said. Not an apology, no pleading for remorse. She’s could have easily killed the elderly man in an attack of this nature. This woman has the demeanor of a serial killer. This is a societal sickness. Beating, killing, and brutalizing someone for trying to just trying to help. Was this attack on purpose? It’s impossible to know what Ms. Body was thinking, but her lack of emotion is horrifying. And if Mr. Tucker had died, she probably would still be stone cold about the ordeal. What’s it to her? In her mind, he was the one who started it by supposedly bumping her with his car.

Mr. Tucker said it all. He was stabbed in the back for trying to help a fellow citizen. He suffered the ultimate betrayal for just trying to be helpful. This is the price one has to pay in America today for being a good Samaritan.