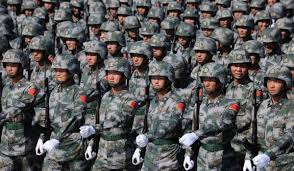 Yep, they’ve finally arrived. Chinese troops are on American soil for a joint exercise. Get your cameras out, you may be able to record living history, snapping pictures of Communist soldiers marching across American soil.

What you have to ask yourself is why the Chinese?

And why during Grid Ex II?

What kind of disaster relief could involve legions of Communist Chinese troops?

Why would the United States of America allow the country it accused of a major cyberattack on its weapons systems just a few months ago to practice disaster relief on home soil?

Why would the United States of America allow the military from a nation known for its suppression of human rights learn to assist the American people when it tramples over the rights of its own citizens?

Amnesty International has documented widespread human rights violations in China. An estimated 500,000 people are currently enduring punitive detention without charge or trial, and millions are unable to access the legal system to seek redress for their grievances. Harassment, surveillance, house arrest, and imprisonment of human rights defenders are on the rise, and censorship of the Internet and other media has grown. Repression of minority groups, including Tibetans, Uighurs and Mongolians, and of Falun Gong practitioners and Christians who practice their religion outside state-sanctioned churches continues. While the recent reinstatement of Supreme People’s Court review of death penalty cases may result in lower numbers of executions, China remains the leading executioner in the world. (emphasis added)

There is more to this than meets the eye…far more.