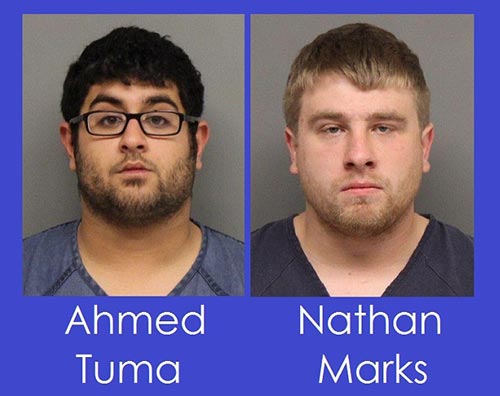 Islam does not permit homosexuality. But in today’s politically correct world of “tolerant” Islam, this statement would be deemed “Islamophobic.” Muslims aren’t bigots, Christians are for taking a stand against homosexuality. In a story that is completely sanitized  by the mainstream media because it makes Muslims look every bit as bigoted as Christians, 20-year-old Nebraska Muslim Ahmed Mohammed Tuma attacked his sister with a crowbar for disgracing their Muslim family. What was her crime? She is a homosexual. Though he did not kill her, he is facing hate crime charges. So now, what about tolerant Islam?

Moderate, tolerant Islam is the biggest cultural myth of the 21st century. It’s as much a fantasy as a fully functioning healthcare.gov website. Interestingly, the story of Ahmed Mohammed Tuma appeared in the Huffington Post, but in the Huffington Post Gay Voices, so as to not attract much attention. But it did have “Muslim” in the title. However, it certainly didn’t make the Islam section of Huff lite, since that is reserved for all the amazing stories about how wonderful Islam is and how “Marvel Muslim Superhero Girl is AWESOME!” And in the Christianity section the first title is “Bill Maher Rages At Christian Hypocrites.” So there’s a slight conflict of interest.

It’s easy to see that the mainstream media, especially leftist propaganda sites like the Huff Post have to keep up appearances that Islam is the greatest and Christians are evil bigots. But there is no getting around the story of Ahmed Mohammed Tuma and his attack on his sister. For it shows that Islam is NOT tolerant of homosexuality.

According to reports, Tuma attacked his sister last Thursday night in Lincoln, NE.

Police say 20-yr-old Ahmed Tuma was angry with his sister because she is in a relationship with a woman. Police say Tuma said it is shameful to their family and against Muslim beliefs.

Police say Tuma’s sister and her fiancee arrived at home near 27th & M when  he  and a friend, 20-year-old Nathan Marks ran up to them.  Police say Tuma tried to hit her with a crow bar.  The couple escaped into their car, but police say Tuma repeatedly hit the car with the crowbar.

Tuma was arrested on November 8th on suspicion of attempted assault, criminal mischief, and making terroristic threats. He is also facing hate crime charges, and his friend and accomplice, Nathan Marks, facing charges of aiding and abetting Tuma.

Tuma’s  sister, whose name hasn’t been released said, “At first I didn’t know who it was. Then I finally realized it was my brother … he had a crowbar in his hand, he tried to hit me with it.”

She was able to get away from her angry, intolerant Muslim brother and get to her car with her companion. They locked the doors, but Tuma, in his rage, tried to push the car into oncoming traffic.

“They were in fear for their lives, he had made some verbal threats to kill the sister,” Officer Katie Flood with the Lincoln Police Dept. said.

Police say the couple drove off, but Marks and Tuma got into Marks’ pickup and followed, ramming them from behind nearly into oncoming traffic on S. 27th Street.

Qur’an (7:80-84) – “…For ye practice your lusts on men in preference to women: ye are indeed a people transgressing beyond bounds…. And we rained down on them a shower (of brimstone)”

Qur’an (7:81) – “Will ye commit abomination such as no creature ever did before you?”

If someone is transgressing beyond bounds, they should be stoned as stated in the Quran. According to Arabic grammar, homosexuality is deemed the “worst sin.”

n the Bible, homosexuality is called an “abomination.” And yet, Christianity is called intolerant and all Bible believing Christians “bigots” for daring to call homosexuality a sin. Where’s Islam’s day of reckoning for being a religion of murderous, honor killing pedophiles? And also for Islam’s particular disdain for homosexuality, which is met with stoning and ostracizing. Even bigoted Christians don’t stone homosexuals. Heaven forbid this is mentioned.

Where is the outrage for Christians, Jews, and others, including Muslims of different sects, who have been slaughtered at the hands of intolerant Muslims? For the baby’s who have been gang raped by Islamic sadists? Islam is the least tolerant religion of any in the world bar none. It’s the only religion where killing the ‘infidels” is a cause for celebration. And the “infidels” are all persons who do not adhere to Islam.

And yet the story of Ahmed Mohammed Tuma’s intolerance toward his sister’s homosexuality is whitewashed, completely sanitized. The headlines read, “Two Suspects Appear In Court” in a Lincoln, NE outlet. The Advocate appropriately titled their story “Neb. Man Charged With Hate Crime Against Lesbian Sister.” The Omaha World Herald titled their story, “Man attacked relative for being gay, Lincoln Police Say.”

Surprisingly, one of the few outlets to make mention of the fact that this crime was perpetrated by a Muslim was the UK’s Daily Mail.

These headlines lie. And in this case telling a half truth is worse because the myth of Islam most tolerant is propagated amongst the masses who don’t know any better. And what’s worse they don’t care. But for the record, Islam and homosexuality do not mix. Now who’s a bigot?