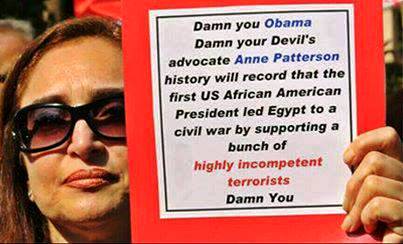 If you haven’t had enough evidence that Senators John McCain and Lindsey Graham need to be removed from office, along with their dance partner Barack Obama, this should be enough to convince you. United States Ambassador to Egypt Anne Patterson is now being considered as Obama’s pick for Assistant Secretary of State for Near Eastern Affairs.

According to Walid Shoebat, “One day after the now infamous CBS 60 Minutes piece about Benghazi, Senator Lindsey Graham (RINO-SC) threatened to put a hold on Obama administration nominees until he was granted access to State Department survivors of the attack. Graham has now agreed to release holds on two of those nominees. If there is one nominee Graham shouldn’t let off the hook, it’s one he did – the U.S. Ambassador to Egypt who is accused of supporting the Muslim Brotherhood during her tenure there.”

Patterson most definitely was supporting the Muslim Brotherhood as we have documented at Freedom Outpost.

Since October, the South Carolina Republican has vowed to block President Obama’s nominees from being confirmed by the Senate unless the administration makes more eyewitnesses of the September 2012 attack in Benghazi available to Congress. But a Graham spokesperson says her boss has made an exception for Anne Patterson, Obama’s pick for Assistant Secretary of State for Near Eastern Affairs, and Gregory Starr, nominated to be Assistant Secretary of State for Diplomatic Security. Graham’s holds on all other administration nominees remain in place.

When asked if the State Department gave Graham anything in return for the lifted holds, the spokesperson said “no.” A State Department official concurred: “I don’t think there was anything — just acknowledgment of them as imp[ortant] posts.”

One must question why Ms. Patterson is being promoted.

Shoebat adds, “In August of this year, it was learned that Hisham Barakat, Egypt’s Attorney General, received multiple complaints that Muslim Brotherhood leaders were receiving bribes from the U.S. embassy in Cairo. A Qatari document which we published at the time seemed to bolster these claims as several Muslim Brotherhood leaders were identified as having received monthly “gifts” (bribes) in U.S. Dollars. As we wrote at the time, the names on the Qatari document match many of the names identified in the complaints filed with Barakat. As the U.S. Ambassador at the time, Patterson should have been made to answer questions. Instead, less than three months later, she’s up for a promotion and Graham is lifting his hold on her nomination.”

What’s not surprising was the fact that both Senator McCain and Graham traveled to Egypt following Mohamed Morsi’s removal of power and called for the release of the Muslim Brotherhood leaders. Anyone else getting the picture for whose side these guys are on? And they have the nerve to talk to us about terrorism!

As we have reported here, there is most definitely an Egyptian connection to the attacks in Benghazi, involving Morsi.

While Graham is making a blowing a lot of hot air over Benghazi (something we need to get to the bottom of, but yes, I think that is all he is going to do), I think the real motivation for his song and dance with the holdup over Patterson is his loyalties and the fact that an election year is coming up; one that many of us in South Carolina cannot wait for so that we can remove him from his senate seat.

It seems that in America what we are lacking are true statesmen who are willing to be called names and endure the ridicule of being politically incorrect to oppose this administration’s radical pro-Muslim Brotherhood foreign policy. Fortunately, we do have a few, but only a few.