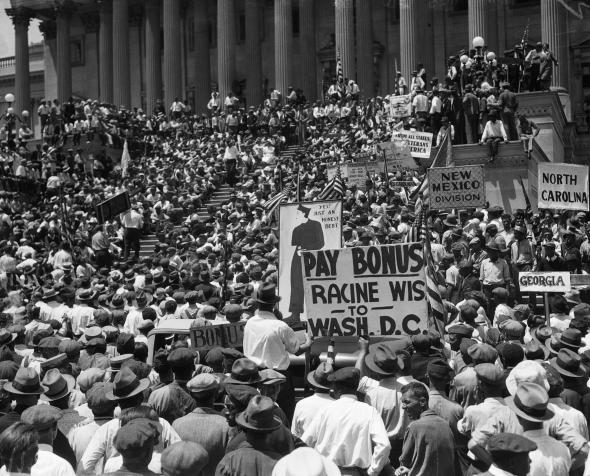 This is never taught in school. It is one of those events that has been erased, I’m assuming because it’s very embarrassing to the Washington DC politicians. It needs to be addressed, just compare this with the events in the last year, the shut down of national monuments and parks, the tossing out of people from their homes within vicinity of a DC attraction, the lock down and detaining of bus loads of tourists in DC and the hundreds of veterans and others who took down barricades in front of the public, the humiliation of the soldiers by this administration, the disrespect of the American Constitution and the American people, NSA spying on American’s with the approval and continuing support by members of the government, the IRS with programs designed to hurt and control American’s without so much as a squeak from congress –

Not so  very long ago, the American government turned on its own people, here’s the story:

A bill was passed in 1924 promising WWI veterans a payment 21 years later — dubbed a “bonus” — in 1945. When the Great Depression hit, veterans organized to demand early payment of the bonus. This was before food stamps and welfare-if you didn’t work, you didn’t eat. They organized a protest march on Washington in 1932, demanding pay for their combat, and approximately 20,000 veterans camped out in the Capitol following the march.

WWI  army veteran, Walter Waters, led 300 hungry, homeless unemployed veterans from Oregon to Washington DC in the spring/summer of 1932 during the Great Depression to attempt to get the early payment of a bonus promised for their war service. A bonus that would not be payable until 1945 when government actuaries calculated the vast majority of the veterans would conveniently be dead and never collect.

These 300 during their journey would inspire veterans from all over America to come to the capitol to set-up military style camps and peacefully march and lobby for their bonus. An estimated 15,000 made their way to the nation’s capital and dubbed themselves the “Bonus Expeditionary Force.”  Using scrap wood, iron and any other loose materials they could find, the veterans set up ramshackle camps throughout the city. The largest housed an estimated 10,000 people.

They waited in vain for Congress to act. On June 17 the Senate voted against the House-passed bill that would have given the Bonus Marchers immediate payment of their benefit.

Weeks went by until Herbert Hoover ordered General Douglas MacArthur to force the vets out. Two veterans were shot and killed, thousands were tear gassed. As MacArthur along with Dwight Eisenhower burned down make shift camps of these vets and their families during the night, Hoover slept.

We do not live in a safe country. The only thing holding us together is the grace of God. Keep the faith because your trust really lies in God and not man, and buy a little extra water/food for yourself.