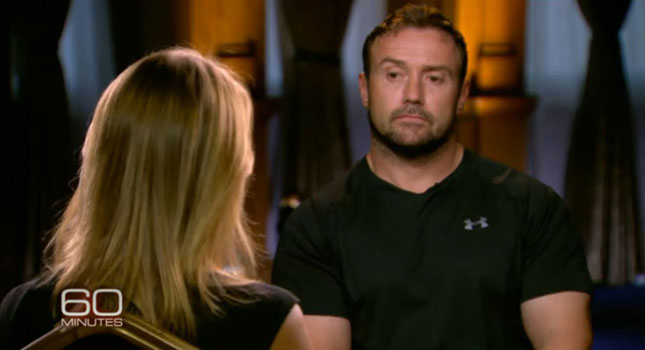 Last week, CBS’s “news” magazine program 60 Minutes issued a contrite apology and retraction for a chilling eyewitness report on the Benghazi massacre and the publishing company Simon & Schuster pulled the book The Embassy House from retailers. Dylan Davies, the author of the book and source for the report, was painted as a dishonest guy looking to make a buck off of a tragedy.

Was CBS under government pressure to retract this story? Was Simon & Schuster forced to pull the books from the shelves? It seems that there is a governmental cloak of secrecy over the attack on the embassy. Files have been sealed. Families have more questions than answers about what happened on that fateful night. (source)

There are still more questions than answers about Davies. The FBI has refused to comment on Davies because he is the subject of “an ongoing investigation.” CBS and other mainstream sources maintain the story that Davies was not a credible witness and that his report was fraudulent. We won’t be getting any answers from Davies anytime soon because he has vanished.

It is the kind of note a publisher dreads. Dylan Davies, the British contractor whose contested eyewitness account of the assault on the U.S. compound in Benghazi caused a firestorm, sent an email to the publisher of his new book telling them he was going dark.

In the message, which was sent on Friday morning to Simon & Schuster vice president Jennifer Robinson, Davies said someone had threatened to harm his family if he continued to defend his account of events in Benghazi to the media. The email was obtained by The Daily Beast.

The timing could not have been worse. Last week CBS’s 60 Minutes, which had interviewed Davies for a report on Benghazi that aired last month, apologized to its viewers and pulled the report. After 60 Minutes walked away from Davies, Simon & Schuster on Friday announced they would be pulling the book from stores.

In the midst of all of this, Davies has not spoken to the media. Friday’s email, which was sent before Simon & Schuster announced its decision to pull the book, provides some clues on his decision to stop talking.

Davies wrote that on Sunday November 3 at 4:00 a.m., he was hand-delivered a note to his home address in Wales that said, “Stop talking now or your wife and son will disappear.” In the email to Robinson, he went onto say, “Due to this threat I will not discuss the book with anyone under any circumstances for the foreseeable future, I am not prepared to put my family in danger. I stand by my story however I understand that it continues to be rubbished, which I expected.”

Davies wrote that the police took the threat to his family “very seriously” and that he had been advised to leave his home in south Wales and he did not know when he would return.

At the end of his email to Robinson, Davies said he understood why his book was being pulled. “Having spoken with Damien this morning I have no problem with the book being taken off the market, I have no way of defending myself at present,” he said. “My reputation has already been ruined in the media and I will never work in the security industry again, this was inevitable due to the sensitive nature of the book, however threatening to kill my family was not something I expected.”

Davies ended his email with these words: “I will not be in touch again for a while, I’m sorry for the trouble this book has caused.” (source)

Did the government cover-up of the Benghazi massacre just go a little bit deeper? Were CBS and Simon & Schuster pressured to retract their stories? Is Dylan Davies a fraud or has his account been silenced and discredited in order to protect people in very high places, namely the current president and the next president?

An ambitious (and some say ruthless) woman, Hillary Clinton is thought to be a frontrunner in the next presidential election, despite the fact that her fingerprints are all over the deaths of those who died at the embassy in Benghazi. Even though she has admitted “partial responsibility” she won’t allow her campaign dreams to be dashed by this scandal, so Davies would be wise to recognize some similarities to other cover-ups that she was connected to. First there was the “suicide” of Vince Foster. Jim McDougal also didn’t fare well after he was involved in a Clinton scandal.

Here’s hoping that Davies really did disappear voluntarily – otherwise he might reappear floating facedown on the Thames, another humiliated “suicide” victim.

Editor’s Update Friday November 15th 10PM: Dylan Davies resurfaced late in the day on Thursday and is OK but says he is still in hiding to protect his family. I was unaware of this development when we published this article today. Here is a link you can follow to read about Davies. -Dean Garrison