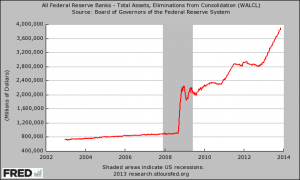 The Federal Reserve is creating hundreds of billions of dollars out of thin air and using that money to buy U.S. government debt and mortgage-backed securities and take them out of circulation.  Since the middle of 2008, these purchases have caused the Fed’s balance sheet to balloon from under a trillion dollars to nearly four trillion dollars.  This represents the greatest central bank intervention in the history ofthe planet, and Janet Yellen says that she does not anticipate that it will end any time soon because “the recovery is still fragile”.  Of course, as I showed the other day, the truth is that quantitative easing has done essentially nothing for the average person on the street.  But what QE has done is that it has sent stocks soaring to record highs.  Unfortunately, this stock market bubble is completely and totally divorced from economic reality, and when the easy money is taken away the bubble will collapse.  Just look at what happened a few months ago when Ben Bernanke suggested that the Fed may begin to “taper” the amount of quantitative easing that it was doing.  The mere suggestion that the flow of easy money would start to slow down a little bit was enough to send the market into deep convulsions.  This is why the Federal Reserve cannot stop monetizing debt.  The moment the Fed stops, it could throw our financial markets into a crisis even worse than what we saw back in 2008.

The problems that plagued our financial system back in 2008 have never been fixed.  They have just been papered over temporarily by trillions of easy dollars from the Federal Reserve.  All of this easy money is keeping stocks artificially high and interest rates artificially low.

How in the world can Fed officials possibly deny that they are monetizing the debt?

Well, because the Fed is promising that it is going to eventually sell back all of the securities that it is currently buying.

Since the Fed does not plan to keep all of this government debt on its balance sheet indefinitely, that means that they are not actually monetizing it according to their twisted logic.

Try not to laugh.

And of course that will never, ever happen.  There is no possible way that the Fed will ever be able to stop recklessly creating money and then turn around and sell off 3 trillion dollars worth of government debt and mortgage-backed securities that it has accumulated since 2008.  Just look at the chart posted below.  Does this look like something that the Federal Reserve will ever be able to “unwind”?… 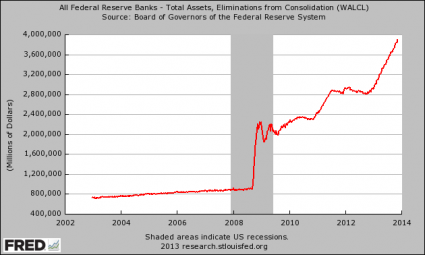 Remember, just the suggestion that the Fed would begin to slow down the pace of this buying spree a little bit was enough to send the financial markets into panic mode a few months ago.

Right now, the Fed is supplying a tremendous amount of the demand for U.S. debt securities in the marketplace.  According to Zero Hedge, Drew Brick of RBS recently made the following statement about the staggering amount of government debt that is currently being monetized by the Fed…

“On a rolling six-month average, in fact, the Fed is now responsible for monetizing a record 70% of all net supply measured in 10y equivalents. This represents a reliance on the Fed that is greater than ever before in history!“

Overall, the Federal Reserve now holds 32.47 percent of all 10 year equivalents, and that percentage is rising by about 0.3 percent each week.

If the Federal Reserve does not keep doing this, the financial markets are going to crash because they are being propped up artificially by all of this funny money.

But if the Federal Reserve keeps doing this, it is going to become increasingly obvious to the rest of the world that the Fed is simply monetizing debt and is starting to behave like the Weimar Republic.

The remainder of the planet is watching what the Federal Reserve is doing very carefully, and they are starting to ask themselves some very hard questions.

Why should they continue to use our dollars to trade with one another when the Fed is wildly creating money out of thin air and rapidly devaluing the existing dollars that they are holding?

And why should they continue to lend us trillions of dollars at ultra-low interest rates that are way below the real rate of inflation when the U.S. government is already drowning in debt and the money that will be used to pay those debts back will be steadily losing value with each passing day?

The Federal Reserve is in very dangerous territory.  If the Fed wants the current system to continue, it is going to have to stop this reckless money printing at some point or else the rest of the world will eventually decide to stop participating in it.

If the Fed wants to go ahead and make quantitative easing a permanent part of our system, then eventually it will need to go all the way and start monetizing all of our debt.

Right now, the Fed is stuck in the middle of a “no man’s land” where it is monetizing a significant amount of U.S. government debt but it is trying to sell everyone else on the idea that it is not really monetizing debt.  This is a state of affairs that cannot go on indefinitely.

At some point, the Fed is going to have to make a decision.  And for now the Fed seems to be married to the idea that eventually things will get back to “normal” and they will stop monetizing debt.

However, she also said on Thursday that it is important not to end quantitative easing too rapidly, “especially when the recovery is still fragile“.

Well, at this point quantitative easing has been going on in one form or another for about five years now.

Will it ever end?

And when it does, how bad will the financial crash be?

Meanwhile, with each passing day the faith that the rest of the world has in our dollar and in our financial system continues to erode.

If the Fed continues to behave this recklessly, it is inevitable that the rest of the globe will begin to move even more rapidly away from the U.S. dollar and will become much more hesitant to lend us money.

The consequences of decades of very foolish decisions are catching up with us, and this is all going to end very, very badly.