Have you noticed that the mainstream media has a tremendous amount of disdain for preppers?  Even though there are now approximately 3 million preppers in the United States, most of the time the media ignores us.  But once in a while an editor in New York City or Los Angeles decides that it would be fun to do a story about the “crazies” that are preparing for doomsday.  And of course it is very rare for any piece in the mainstream media about preppers to be even close to balanced reporting.  Most of the time, news stories that report on preppers portray them as mentally unstable kooks and loons that everyone else in society should be laughing at.  But perhaps there is a deeper explanation for the contempt that the mainstream media has for preppers.  After all, those in the media are representatives of the establishment, and they are probably deeply offended on some level that we don’t have the same kind of blind faith in the system that they do.  The fact that so many Americans believe that the system is on the verge of collapse doesn’t make any sense to them, and instead of really looking into the truth of what we are saying, they would much rather dismiss us by labeling all of us a bunch of uneducated nutjobs on the fringe of society.

A few days ago, I came across another example of this demonization of preppers by the mainstream media.  The following are a few lines from a recent CNN article entitled “What I saw at the doomsday prepper convention“.  For the first few paragraphs the piece actually seems fairly balanced, but by the end of the article the author can’t resist openly mocking preppers and what many of them believe.  Just check out these zingers…

-”It’s so much more fun to worry about martial law than a hurricane. People like zombies as a marketing tool.”

-”I spot more than a few zombie-themed rifle targets at the show.”

-”Still, it was impossible to completely ignore the presence of an element many would consider reactionary.”

-”After a relatively measured primer on the threats of inflation, featured economist Dr. Kirk Elliot encouraged me to look into how the Rothschild and Rockefeller families continue to own the Federal Reserve”

-”Finally, at the end of my conversation with John Egger about the rise of ‘suburban homesteading,’ a man with a white shock of hair interjected himself into the conversation. ‘You know what chemtrails are?’ he asked, referring to another conspiracist trope that sees chemical tampering in jetstream vapor trails. ‘They’re changing the weather, then selling drought tolerant seeds. George Soros and Bill Gates are behind it.’ Egger nodded politely and smiled, tolerant of a potential customer’s eccentricities.”

-”While normalcy and centrism may be the goal for businesspeople like Cindy and Jim Thompson, it seems the preparedness lifestyle hasn’t completely shaken loose its extremists and kooks.”

And of course this is hardly an isolated example of prepper bashing.  The following is an excerpt from a Los Angeles Times review of the “Doomsday Preppers” television show on the National Geographic channel…

Still, it’s hard not to feel for young Jason from tiny Plato, Mo. (pop. 109), who is awaiting worldwide financial collapse with his homemade, nail-studded “mace-ball bat,” and that his is a life on the verge of going completely wrong. “I’m not afraid to have to kill,” Jason says, in his camouflage pants and dog tag, and there seems to be no question in his mind that it will come to that. (“Jason has always been a worrywart,” says his mother.)

Or for Big Al, from Nashville, who is getting ready for old-school nuclear war by digging down into the earth and surrounding himself with steel. (“I prefer not to use the term ‘bunker’ — to me, it’s an underground house.”) He spends months at a time by himself down there, training for the inevitable — which he expects to weather alone — cooking different combinations of canned goods and, you know, spending too much time alone. One leg pumps constantly as he talks.

The preppers don’t want my pity, of course — quite the opposite, I’m sure. The joke will be on me, they would say, when I am expiring from fallout or smallpox, being carried away in a tornado or torn apart by the hungry ravaging hordes. (I am not even prepared for the Big Earthquake that might more probably get me.)

Would the Los Angeles Times mock other groups of Americans in a similar manner?

Meanwhile, as the mainstream media continues to mock us, there is a perfect example of why we should all be prepping that is unfolding right in front of our eyes.  The most destructive typhoon in the history of the Philippines is showing just how rapidly society can completely fall apart in the event of a major disaster…

The cries of the suffering carried through a small, cramped one-story clinic in typhoon-ravaged Tacloban where the medicine was all but gone Thursday, but the number of wounded in the hard-hit Philippine city continued to grow.

The clinic at the airport in the decimated capital city of Leyte province is one of the few places where those injured in Super Typhoon Haiyan and its aftermath can turn for help, what little help there is six days after the storm.

Most Americans assume that if anything like this ever happened here that the federal government would rush in and rescue them.

But what if the government didn’t come to rescue you?

Past disasters such as Hurricane Katrina have long since faded from the memories of many Americans.  How quickly we forget the lessons that we should have learned from past tragedies.

And what if there is an event such as a massive EMP blast that causes public services to go down permanently?

In the Philippines, there is widespread looting and rioting even though this natural disaster is only temporary and governments from all around the world are rushing in to offer assistance…

TV reports said security forces exchanged fire with armed men amid widespread looting of shops and warehouses for food, water and other supplies in the village of Abucay, part of worst-hit Tacloban in Leyte province.

While eight people were crushed to death when looters raided rice stockpiles in a government warehouse in the town of Alangalang, causing a wall to collapse, local authorities said.

Warehouses owned by a food and drinks company were ransacked in the storm-hit town of Palo in Leyte, along with a rice mill in Jaro, said Alfred Li, head of the Leyte Chamber of Commerce and Industry.

Tacloban city administrator Tecson John Lim said 90 percent of the coastal city of 220,000 people had been destroyed, with only 20 percent of residents receiving aid. Houses were now being looted because warehouses were empty, he said.

If you don’t think that anything like this could ever happen here, you are just being delusional.  Americans are not any better than those living in the Philippines.  When something really, really bad happens in the heart of the United States, we will see mass panic and fear here too.

–44 percent of all Americans do not have first-aid kits in their homes.

–48 percent of all Americans do not have any emergency supplies stored up at all.

–53 percent of all Americans do not have a 3 day supply of nonperishable food and water in their homes.

So instead of making fun of preppers, perhaps the mainstream media should be encouraging more people to prepare for future emergencies.

Someday major disaster will strike this nation, and what that happens it will be the preppers that will have the last laugh. 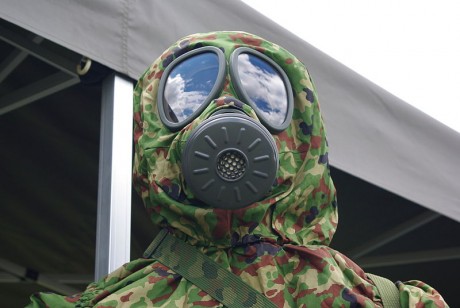 Michael Snyder is the Editor of End of The American Dream.