A recently poached elephant, part of a family of six that was killed on or about October 27, brought down by a hail of 21 shots. (Photo: CBS)

Elephants, the largest living terrestrial animal, can live up to 70 years in the wild. They communicate by touch, sight, smell and sound; and use infrasound and seismic communication over long distances. Elephant intelligence has been compared with that of primates and dolphins. They appear to have self-awareness and show empathy for dying or dead individuals of their kind.

But these noble creatures are on the verge of extinction.

The reason: Human greed and vanity that drive a $10 billion a year illicit global trade in ivory, provided by elephant poachers.

Most elephants are killed in Africa, where there are about 300,000 African elephants left, less than half the number that lived on the continent in 1979. In 2012 alone, 35,000 elephants were killed. At that rate, elephants will be extinct in Africa in less than 9 years, by the year 2022.

In Asia, there are an estimated 50,000 Asian elephants left, from India to Vietnam.

Yesterday, Nov. 14, 2013, major steps were taken in Colorado to smash the industry.

At the National Wildlife Property Repository just north of Denver, U.S. officials used rock crushers to pulverize more than 6 tons of confiscated ivory tusks, carvings and jewelry — the bulk of the U.S. “blood ivory” stockpile accumulated over 25 years which represented the killing of more than 2,000 adult elephants — to support the fight against a $10 billion global trade that slaughters tens of thousands of elephants each year.

The items had been seized from smugglers, traders and tourists at U.S. ports of entry after a global ban on the ivory trade went into effect in 1989.

“This is a way to say to people we are not putting a value on ivory. We’re putting a value on the lives of the elephants,” said Azzedine Downes, president of the International Fund for Animal Welfare, which works with U.S. agents to enforce animal protection laws.

Not everyone supported the ivory crush. Bob Weisblut, a co-founder of the Florida-based International Ivory Society, said he thought the carvings and tusks should be sold to raise money for anti-poaching efforts. “A lot of this is beautiful art,” Weisblut said. “And it’s a shame to destroy it.” 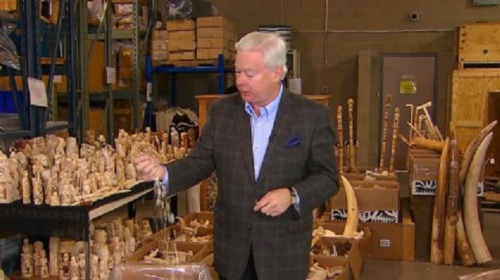 The primary destination for smuggled ivory is ever-wealthier China, where owning ivory pieces is a status symbol. Smuggled ivory can bring in more than $1,000 a pound on the streets of Beijing.

The Clinton Global Initiative recently announced an $80 million pledge to fight the increasingly sophisticated illegal ivory trade. Former Secretary of State Hillary Clinton spoke earlier this week at the premiere of a documentary about the ivory trade called “White Gold”: “The death toll keeps going up because the poachers are now so well armed. They come in on helicopters with automatic weapons, with night-vision goggles.”

Clinton said, “Armed groups like the Janjaweed from Sudan, al-Shabab, which you know is out of Somalia which staged the terrible assault on the mall in Nairobi recently — they use this illicit trade to fund their terrorist activities across America.“

And the criminals are getting smarter. Ivory exported before 1989 is still legal, so they discolor tusks by soaking them in a chemical or tea to make it look old, trying to fool inspectors.

The State Department announced Wednesday a $1 million reward for help in dismembering a criminal network that operates out of Laos that runs the ivory from Africa into the Asian markets.