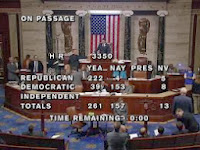 The rats deserted the sinking ship as 39 House Democrats* sided with the Republicans** in a loud and clear voice to tell Barack HUSSEIN Obama that his ObamaCare so-called ‘fix’ stinks.

And while Harry Reid, Nancy Pelosi, and their ilk are mad as hell that Obama did NOT stand strong and demand enforcement of ObamaCare in the form it was passed in…the form they voted on in the middle of the night along party lines and then forced down our throats…the truth is that Obama’s ‘fix’ is NOTHING but a political maneuver that allows people to ignore the law for one year as they fight with their insurance companies to get their cancelled policies back…

…To get their policies back for one year as Obama hopes his anything but a ‘fix’ will make the voters forget that come January 1, 2015 back into ObamaCare they all go as cancellation notices go out anew.

In other words, Obama has now shifted the blame to both the insurance companies that rushed and sent out the cancellation notices in the first place and to those who got the cancellation notices. Making those who received said notices the ‘bad guys’ because they dared to complain about losing their what Obama calls sub-standard policies that they were happy with…as punishment for them calling him to task Obama has made it so that they must now beg and plead with the what he refers to as ‘money-grabbers’ to reinstate them.

And while these 5.1 million Americans who have gotten policy cancellation notices try to do what’s best for themselves and their families, Barack HUSSEIN Obama kisses his reflection in the mirror as he smirks that he once again successfully passed the blame…that he once again secured a fall guy…that he successfully (or so he thinks) put a band-aid on his cleverly crafted manipulative LIES.  And while the loyal sheeple are buying into his anything but an apology and his supposed ‘fix’ bloviations, Americans across the country are slowly waking up to the real truths about this administration that we have long tried to tell them about.

So while the ObamaCare nightmare is still upon us, there is a glimmer of hope that in the end America will survive this most vile of laws for yesterday’s House vote proved that bi-partisanship can indeed happen, for in a vote of 261-157, the House voted to approve the bill sponsored by Michigan Rep. Fred Upton (R) called “Keep Your Health Plan Act.” This bill allows insurance companies to sell their old individual policies back to the policyholders who previously had them, as well as sell them to new people who are looking to buy individual policies but who do NOT want to go into the dreaded ObamaCare exchanges…and to do so for another year even if the policies do NOT meet ObamaCare’s mandated requirements.

But you just have to love yesterday’s House slap in the face to Obama’s so-called ‘administrative fix’…his ‘executive fiat’…a ‘fix’ he only wanted to apply to those policy holders enrolled in the plans before the cancellation notices were sent out. And this vote also slaps the faces of Obama’s loyal Democrats who did NOT want to allow new customers to purchase private policies, saying that would undermine the intent of ObamaCare…an intent they claim is about wanting minimum health coverage standards for everyone. But what they dare NOT say is that it’s we taxpayers that have to foot the bill for that minimum coverage for ‘everyone’ by having us pay higher premiums…much higher premiums…for coverage we do NOT want, need, or can actually afford.

As for intent…the true intent of ObamaCare is NOT to afford Americans better comprehensive health care policies nor is it to give Americans access to better medicine and better medical care…the true intent of ObamaCare is to redistribute hardworking, taxpaying American’s wealth…to divvy it up to give incentive to the ‘sponges’ of our society to stay loyal to the Democratic party…to assure they vote Democratic for generations to come. The ‘gimme-gimme you owe me’ crew will NEVER bite the hand that feeds them…or in this case gives them free medical care that we taxpayers pay for…and so they will do as they are told out of fear that if they don’t their free-ride will come to an end.

And while yesterday Obama mouthpiece Jay Carney said that Obama “did what he can do administratively to address this problem,” and that he “will work with Congress so that Congress will do what it can do legislatively…but what he won’t do is support policies that are essentially designed to undermine the Affordable Care Act” what he and his boss do NOT get or get but refuse to accept is that ObamaCare is dying of its own accord as it simply does NOT work…is NOT monetarily sustainable…and is NOT something the vast majority of ‘We the People’ want.

And as Obama meets with health insurance company CEOs to discuss the changes in the now new and improved (gag) ObamaCare, he is doing so AFTER he announced his supposed ‘fix’ instead of BEFORE when the insurance companies could have weighed in on whether his ‘fix’ was actually NOT only doable, but if it would even ‘fix’ the problems at hand. And how I would have loved to have been the proverbial fly on the wall when Barack HUSSEIN Obama informed those CEOsthat they had just 31 days to get the job done…to get the problems ‘fixed’…after he had three long years to get ObamaCare right in the first place.

So as it stands right now the House bill has passed with bi-partisan support which one would think is a harbinger of good news, but its passing comes with one big caveat…Obama has said he will veto it.