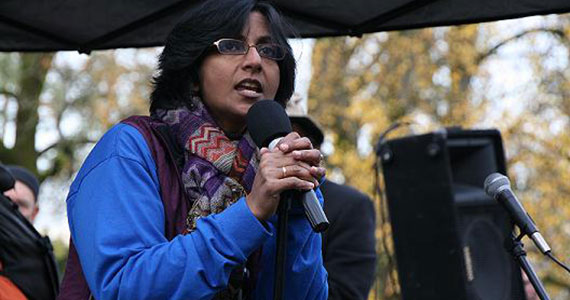 Richard Conlin was a four-term (16 year) veteran of the Seattle City Council. He twice served as council president, in 2007 and 2009. In the end he was a liberal who was no longer liberal enough. Richard Conlin conceded on Friday after it was clear that he would not win. He will be replaced in January by an openly socialist candidate named Kshama Sawant.

Sawant, a 41-year-old activist, will join the council in January.

“These exciting results show a majority of voters are fed up with the corporate politicians who have presided over the widening chasm between the superrich and the rest of us,” she said in a statement.

And Conlin, the 65-year-old two-time council president, said his career in public service is finished.

“Certainly I’m surprised and disappointed,” he said in the evening news conference. “I felt that we ran a strong campaign, and she obviously ran a stronger one.”

Conlin, who said he almost decided last year not to seek re-election, declined to speculate on why he lost. Some have said the longtime liberal became too conservative for Seattle.

“I don’t think socialism necessarily makes most people in Seattle afraid,” he said.

Sawant’s priority legislation is a $15 per hour minimum wage in Seattle. Can you imagine paying an 18 year old kid $15 an hour to screw up your order at McDonald’s?

The big news here is obviously the party affiliation of Sawant.

We have a nation that is rapidly gravitating toward becoming a socialist state and the people of Seattle have spoken.

Either they do not fear socialism, as Conlin theorized, or they simply do not understand it.

I would have to go with the latter.

Vladmir Lenin is reported to have said, “The goal of socialism is communism.”

Knock yourself out Seattle.

Just don’t whine when a Big Mac costs $9. Higher wages mean less profits and if you think that businesses are going to settle for less profits then you need to hit that bong again and rethink your position.

I for one do appreciate the fact that the openly socialist candidate defeated the closet socialist in this election.

At least now we can call it like it is.