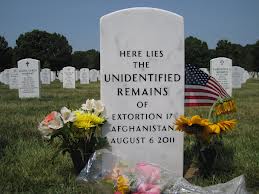 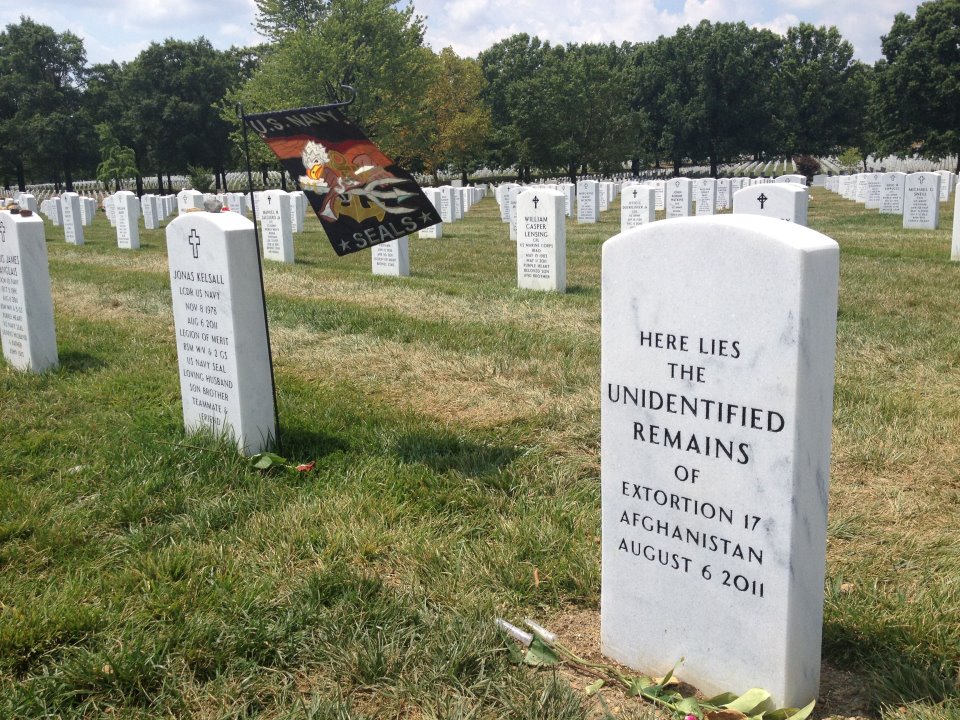 This past Saturday I had the honor of attending a luncheon event put on by the Tea Party of Fort Lauderdale, the nation’s oldest continuously running Tea Party.  The featured speakers were Karen and Billy Vaughn whose Navy SEAL son Aaron was killed in the take down of what has now been referred to as call sign Extortion 17.  Extortion 17…the events surrounding the almost 50 year old CH-47D Chinook cargo helicopter that was NEVER intended for troop transport or for Special Operations missions…the helicopter shot down in Afghanistan’s Wardak province killing all 38 people on board (30 Americans and 8 Afghan Nationals) including 17 members of Navy SEAL Team 6, five SEAL team support members including one service dog, three Air Force members, and five US Army and National Guard flight crew members.

17 members of SEAL Team 6…the most elite fighting force the world has ever known…the same unit that took out Osama bin-Laden…lost that day in what was the single most deadly day for the US Navy since the war began.

Shot down by the Taliban…something Barack HUSSEIN Obama still has trouble admitting…shot down with seven of the eight Afghans on board (one was an Afghan translator scheduled to be on the flight) substituted at the last minute for the original group that was on the flight manifest.  Perhaps shot down to silence SEAL 6 Team…perhaps shot down as revenge for the killing of Osama bin-Laden (in fact on May 6, 2011 just three short months before the helicopter was downed the Taliban did publicly vow revenge for bin-Laden’s killing)…or NOT shot down but actually the victim of a suicide bombing committed by one of the seven who was NOT supposed to be on board.

Rumors abound…supposition and innuendos spoken of by people NOT in the know…by people who did NOT lose their loved ones in that crash like the Vaughn’s did…’truths’ that must be told to those like Aaron’s parents who have unwaveringly searched for answers as to the whys…who have searched for and demanded the truth from this deceitful administration ever since they found out that their beloved son was on that helicopter…and the picture they are unraveling is NOT a pretty one.

The why is that the Afghan theater has now become a fiasco…a fiasco that turned a war we were once winning into a killing field with our troops the victims…the war that went sour when Barack HUSSEIN Obama allowed politicians to run the war instead of listening to the generals on the ground.  Four times between 2009 and 2011 Obama rejected the generals recommended advice concerning the Afghan theater…including announcing the dates for our troop’s withdrawal…and in 2011 things started to seriously sour.

Now add in the ‘altering’ of the Uniformed Military Code of Justice…a code that comes right out of the Articles of War…a serious move on Obama’s part to ‘redo,’ if you will, our military…including having women fight alongside men on a daily basis…done to appease the enemy…done to be ‘politically correct…to win, as Obama likes to say, ‘the hearts and minds of the enemy.’  But truth be told this president has our troops actually fighting under the banner of ‘politically correctness’ instead of fighting a war to win as our troops were trained to do.  This president does NOT want ‘collateral damage’…does NOT want his brethren killed…forgetting or just ignoring the fact that it’s the very ‘collateral damage’ he does NOT want that forces the enemy…any enemy…to lay down its weapons and surrender.

And the simple fact that standard tactics, techniques, and procedures were NOT followed that fateful day (such as NO pre-assault fire was allowed as the chopper came in to land)…just like they were NOT followed in Benghazi one year later…makes these deaths…this “reckless loss of life” as Billy Vaughn so rightfully puts it…ever the more so tragic for accountability for their deaths is being held hostage by those in power who hold the threat of prosecution over any and all who question their watered down accounting of that day’s horrific events…who question the now ‘politically correct’ Rules of Engagement…rules that make the successful carrying out of a command mission almost impossible.

Is the Obama administration so hateful of our military as to deliberately and with malice be willing to spit in the face of plain common decency just for their own fame…just for their own egos…just for their own selfish political gain.  It’s NOT just a strong possibility but is the harsh reality of a group of men…especially of Barack HUSSEIN Obama…who can sink so low as to use the return home of the remains of those lost as a photo-op for themselves when the families specifically asked that photos NOT be taken so they could cry…so they could grieve…in private as the bodies of their loved ones were returned to the country they gave their lives for.

And could misspeaks…whether deliberate or NOT…by those in this administration been the precursor to these deaths…it is a strong possibility for to be the success that they are the Navy SEALS work in secrecy…to stay under the radar so to speak so they can do what we dare NOT speak about.  And now in the months leading up to August 6, 2011, they were outed…NOT only to the American public but to the enemy as well.  Could the fact that on more than one occasion Vice-President Joe Biden named SEAL Team 6 as the ones who took out bin-Laden…could that have set the wheels in motion for SEAL Team 6’s demise…it is a strong possibility.  Could former CIA Director Leon Penneta’ s revealing the name of theSEAL Team unit and its leader to screen writer Mark Boal at a 2011 awards ceremony have led to the events of August 6th…it’s a strong possibility.  Could the access to documents and supposedly classified information Obama gave to director Kathryn Bigelow for her movie about Bin-Laden’s take down have contributed to the killings…it’s a strong possibility.

And worse…could our military hierarchy (NOT the rank and file) actually be complicit NOT in the killings of course but in the cover-up of truths so grievous as to compromise our national security… more questions that remain unanswered.

And so the Vaughn’s quest for those answers began but their questions were and still are many…too many for me to expound upon in a mere op-ed…too many for me to risk a misspeak that could cause this family any more pain than they’re already feeling. Billy Vaughn’s book ‘BETRAYED: The Shocking True Story of Extortion 17 as told by a Navy SEAL’s Father‘ can explain his and his family’s journey for the truth so much better than I ever could…I recommend you get a copy and learn the sad truth of the pain this administration has inflicted upon one American family…times thousands.

And so tears fall NOT just for the Vaughns and for Aaron, but for all those lost that fateful day…for all those lost under Barack HUSSEIN Obama’s watch due to his ineptitude and reckless unconcern for those who put their lives on the line daily…for those who fight to defend America as they keep us safe and free at home.  Mistakes, cover-ups, and LIES…the hallmark of an administration run amok is especially disturbing…especially shameful when it comes to our military for this president…this miserable excuse of a Commander-in-Chief…forces our military to fight with weapons NOT poised and ready for battle but with weapons put aside so as NOT to hurt the very ones out to kill us all.

So as the elusive answers to the questions asked of what really happened on August 6, 2011 still remain untold…it’s now up to us to demand those answers and to…as Billy Vaughn says…”defend the defenders” of our freedoms…for if we patriots do NOT do it who will.